Restaurants’ Share Of Food-Dollar Grows To Record 54.9% In April

Restaurants’ Share Of Food-Dollar Grows To Record 54.9% In April

Restaurants continued to increase their share of spending in April, reaching 54.9% of the food dollar, according to U.S. Census data released Tuesday. That was a 260-basis-point increase from April last year, when the share was 52.3%, said analyst Mark Kalinowski, president and CEO of New Jersey-based Kalinowski Equity Research LLC.

“Even more impressively, as best as we can tell, this 54.9% market share figure for April 2022 is an all-time monthly high for the U.S. restaurant industry,” Kalinowski said in a note released Tuesday about the April U.S. Census data. 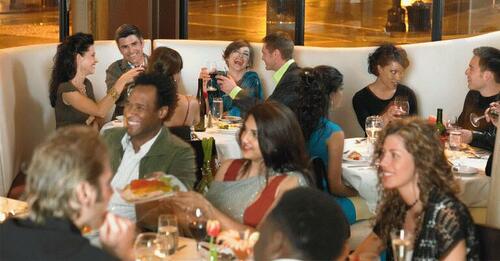 “The key takeaway from this is you have a lot of menu prices going up in the restaurant industry,” he said in an interview.

“And, of course, the fear anytime you’re raising your menu prices is that customers will trade down, but that hasn’t happened.”

Kalinowski noted that while restaurant brands were increasing prices, the rate of hikes was less than in grocery prices.

“If you need to eat — and I haven’t yet met the person who didn’t need to eat — you have got to buy the food from some place unless you’re growing it yourself or you have a neighbor who grows it,” he said. “The fact is the restaurant industry offers a lot of convenience. It offers experiences that the grocery stores can’t match.

“It is so firmly a part of the American fabric now that Americans don’t necessarily want to cut their restaurant spending,” Kalinowski said.

The analyst also noted that larger restaurant brands were being very calculated in how they were raising prices to offset their increased commodity and labor costs.

For example, Kalinowski noted, “McDonald’s looks at the food at home inflation and takes that into account with their menu pricing. I would imagine there’s definitely a lot of other chains out there that have gotten a little more sophisticated with how they take their menu pricing.”

Those judicious price increases are easier for large, multi-unit chains to institute than for independent restaurants, he noted.

“Independents lack the scale advantages that large chains have,” he said, “so part of the challenge for independence is, in the time of just big commodity cost inflation, how do you battle that. That’s not saying it’s easy for the large chains — it’s hard on everybody just about.”

Over the past two years, he added, the industry has seen the largest shift toward big restaurant brands who are taking increased shares of what is a larger pie.

Kalinowski said it was intriguing that combined foodservice and drinking place sales with grocery sales had increased significantly from pre-pandemic levels.

This past April marked the 12th consecutive month for which that number was up more than 10% over the corresponding pre-pandemic monthly number, Kalinowski noted.

“We continue to look for restaurants’ market share in full-year 2022 to be at least one full percentage point higher than the full-year 2021 figure of [positive] 52.7%,” he said.

“All in all, this is good news for restaurant stocks — which tend to be comprised of the very largest restaurant concepts in most cases,” Kalinowski said in his note. “Large concepts have fared better than smaller chains and independents during the pandemic, creating the largest opportunity in decades for market-share gains within the restaurant industry favoring large chains.”