The global inflation narrative needs to stay on the front burner persistently for the yen to decline toward 150 per dollar, a level not seen in more than three decades. Specifically, five-year inflation-adjusted yield differentials between the dollar and yen need to at least double from around 181 basis points now for Japan’s currency to weaken toward the 150 zip code. 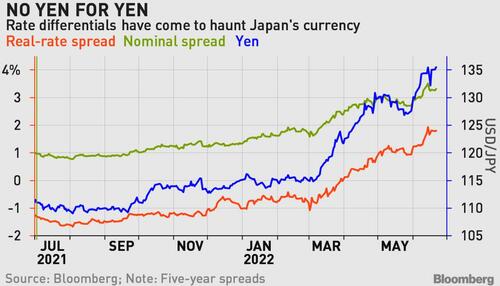 There are two paths for those spreads to widen: inflation stays stubbornly high in the U.S., forcing the markets to re-price the already-steep Federal Reserve’s policy trajectory; or alternatively, inflation expectations in Japan climb relatively faster and the Bank of Japan chooses to persist with its control of the domestic yield curve.

A widening of both real and nominal rate differentials underpinned the bulk of the 15% slump in the yen so far this year, the worst performance among G-10 currencies.

About 4 percentage points of the decline is explained by second-order or convexity effects, meaning traders are preparing for a scenario where the BOJ’s policy stance and the Fed’s tightening will continue to widen those differentials.

If that narrative stays intact in the months to come, the second-order effects would become even more pronounced, accelerating losses in the yen.

While Governor Haruhiko Kuroda remarked earlier this month that the Japanese central bank doesn’t target the exchange rate, the BOJ subsequently issued a joint statement with the finance ministry vowing to take “appropriate action” should the yen continue to weaken — suggesting the ministry and the central bank may be at odds about their stance on a weaker yen.

In an economy as big and as open as Japan’s, policy makers can’t both aspire to control the yield curve and put a floor under the yen at a time when other global central banks are in the midst of the biggest tightening cycle in years. Even the Swiss National Bank, which long stood shoulder-to-shoulder with the BOJ on policy rates, surprised the markets with an emphatic 50-basis point move last week.

Increasingly, the feeling is that something may have to give in terms of Japan’s policy levers. Among them:

The yen could also get a reprieve and stave off a decline toward 150 should inflation in the US show signs of a sharp deceleration in the coming months.

All told, the yen — which is now the cheapest it has been in decades based on its real effective exchange rate — is looking for the climactic episode to play out after what has been a mammoth slump since the end of 2020.