This Is Not The Time To Exit Commodities, Recession Or Not

This Is Not The Time To Exit Commodities, Recession Or Not

Despite the ongoing rout in energy names and the broader commodity sector, the longer-term outlook for commodities remains exceptionally positive – whether there’s a US recession or not.

Commodities, from oil to wheat and from natural gas to copper, have been selling off, with rising recession risks being pinned as the reason. However, as Bloomberg’s Simon White writes this morning, good old-fashioned profit taking is likely part of the picture, as both commodities and commodity equities have had a fantastic run over the last two years, largely insulated from this year’s turmoil.

The usual caveat is necessary that nothing moves in a straight line, and continued profit taking and fear of recession could see more downside in the next 2-3 months. But cheaper prices could be used to add to existing positions, or look at out-of-the-money calls.

To be sure, fear of a recession is legitimate, and with growth falling –- and the data show it will continue to fall -– it is merited to price in a growing probability of a recessionary outcome. But as White notes, selling commodities is less legitimate if one thinks there’s a recession coming – especially with the backdrop of very elevated inflation.

However, there is a difference for recessions that were caused by a rise in commodity prices (e.g. the 1973-75 recession). In these cases, commodities rally after the recession begins as the initial fall in price actually eases the growth problem, allowing activity to partially recover (i.e. making the recession less deep), which is enough to allow them to rally through the downturn. 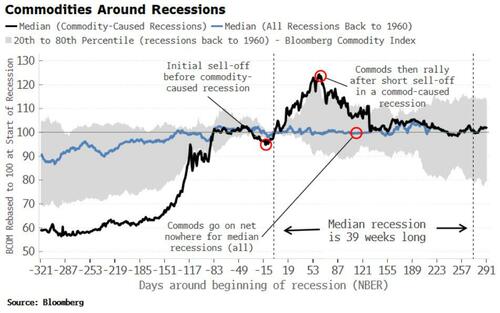 Thus even if we get a recession – commodity-triggered or not – it does not make sense to fully divest oneself of commodities or equities such as energy and materials. This is doubly so when considering that inflation is in an elevated and sticky regime – unless one assumes that Putin will end the war with Ukraine shortly – and the extended length of time it will take for producers to invest in new supply after years of underinvestment.

White is not alone being bullish on commodities: as his Bloomberg colleague Jake Lloyd-Smith also notes, while oil has been taking a beating as concerns that a US recession is just around the corner hammer prices, “even if a test of the $100/bbl level comes sooner rather than later, the recent steep drop seems excessive.”

While the slide is clearly a case of fast-deteriorating macro sentiment overwhelming still-positive micro indicators, and trigger happy CTAs reversing on recent upward momentum in commodities, the world is still quite short of crude, and product markets remain tight, as the war in Ukraine drags on. Among the positive signals, backwardation – an extremely bullish pattern – remains impressive. Brent’s prompt spread is more than $3/bbl. That’s still robust. While the December-December spread has narrowed, it’s holding above $10/bbl. 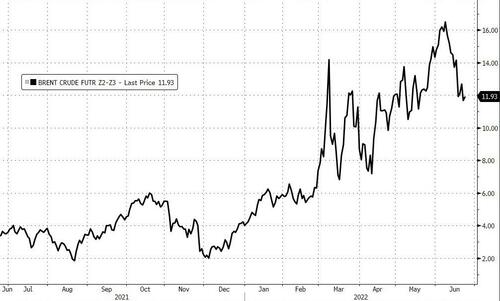 What could spark the bounce? According to the Bloomberg analyst, the potential drivers of a rebound are many and varied: