Tesla Delivered Only 254,695 Vehicles For Q2, But Posted A Record Production Month In June

Tesla Delivered Only 254,695 Vehicles For Q2, But Posted A Record Production Month In June

Tesla came out today and said that it delivered just 254,695 vehicles for Q2 2022, as the company hit snags due to its Shanghai shutdown and supply chain issues. 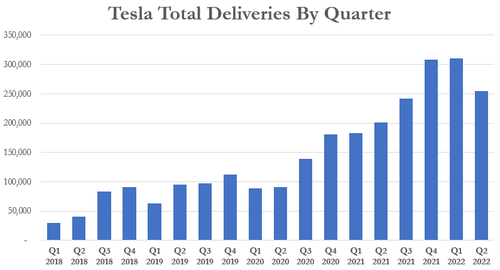 Despite this, the company’s June month was the highest vehicle production month in Tesla’s history, according to Bloomberg. The company’s deliveries represent a 26.7% gain in deliveries from last year and a drop from last quarter’s record of 310,048.

The drop marked the lowest delivery quarter since Q3 2021 for Model 3/Y vehicles. 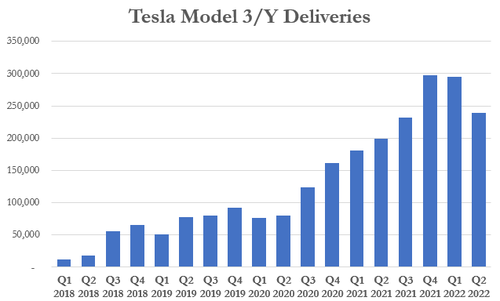 The company was originally expected to deliver 295,000 vehicles, but analysts had reduced their estimates to around 256,000 over the last week, TheStreet noted. Tesla delivered 238,533 Model 3 and Model Ys for the quarter, and 16,162 Model S and Model X vehicles.

As you can see, the company’s phase out of the Model S and Model X looks to have continued, despite a slight uptick: 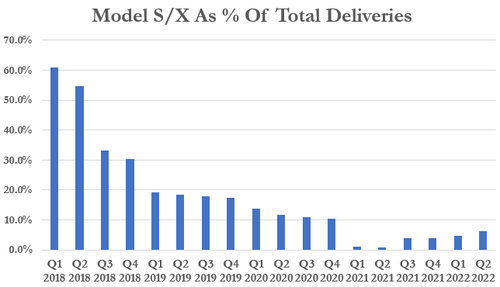 The company stated: “In the second quarter, we produced over 258,000 vehicles and delivered over 254,000 vehicles, despite ongoing supply chain challenges and factory shutdowns beyond our control.”

Q2 was widely expected by Wall Street to be a miss due to the disruptions. “This has been a very tough quarter, primarily due to supply chain and production challenges in China. So we need to rally hard to recover!” CEO Elon Musk said back in mid-June.

Morgan Stanley was out 2 weeks ago bracing for the Q2 plunge, lowering price targets on the name and saying it expected lower Q2 volumes. “We mark to market our 2Q forecasts for lower volume (latest data, China) with most of the shortfall made up for in 2H volume and higher pricing,” analyst Adam Jonas wrote last month. He also predicted the company would have a good June:

Despite the cuts, Jonas is still encouraging “buying the dip” into what will likely be a weak Q2 print. He said that “with TSLA 2Q sales estimated to be around 100k units through May (EV-Volumes.com), we believe TSLA will flex its manufacturing prowess, aided by accelerated ramp of Austin and Berlin, and deliver ~170-175k units in June.”

Also in June we had highlighted a Wedbush note from Dan Ives said Tesla’s shutdown in China was an “epic disaster” for its June quarter. Ives said he expects to see “modest delivery softness” for the quarter.

Ives also said he is expecting a “slower growth trajectory” in China into the second half of the year and called the headwinds out of Asia “hard to ignore”. He also commented that the ongoing Twitter drama “may be a distraction” for Musk at a time when his attention should be focused on dealing with Tesla’s issues.

Recall, we noted weeks ago that “no vehicles were sold in Shanghai last month [April]” as a result of the lockdown, according to an auto-seller association in the city.