Authored by Madalina Vasiliu via The Epoch Times,

Stewart Rhodes, founder of the Oath Keepers militia group, was found guilty by a jury on Nov. 29 of seditious conspiracy connected to the events on Jan 6, 2021.

One co-defendant, Kelly Meggs, was also found guilty of seditious conspiracy on Tuesday, while three others—Kenneth Harrelson, Jessica Watkins, and Thomas Caldwell—were acquitted of that charge.

In total, Rhodes was found guilty on three out of five counts: seditious conspiracy, obstruction of an official proceeding, and tampering with documents or proceedings.

Stewart Rhodes, founder of the Oath Keepers, center, speaks during a rally outside the White House in Washington, on June 25, 2017. (Susan Walsh/AP Photo)

The other three defendants were each found guilty on multiple lesser charges.

In closing arguments, defense attorneys said the government failed to prove that the Oath Keepers planned to attack the Capitol or to interfere with the certification of Electoral College votes on Jan. 6, 2021.

A defense lawyer said that none of the 50 witnesses in the Oath Keepers trial testified that they heard any of the defendants discuss or plan to storm the Capitol on Jan. 6, 2021.

However, in the final rebuttal, U.S. Attorney Jeffrey Nestler said that according to the jury instructions (pdf), the government did not have to prove that the defendants had a detailed plan to breach the Capitol and meet in person to discuss their alleged scheme. An implicit agreement and mutual understanding were enough to prove the defendants’ conspiracy, he said. 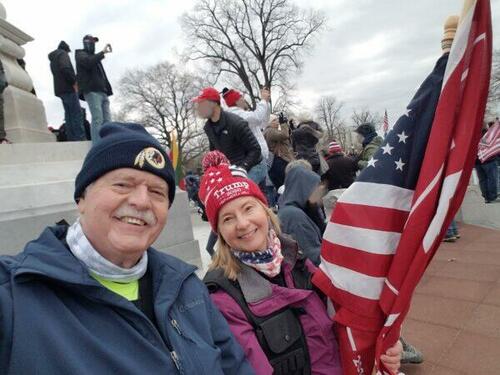 Sharon and Thomas Caldwell at the Peace Monument during the January 6, 2021 protest in Washington, D.C. (Courtesy of Sharon Caldwell)

Nestler told the jury that the three defendants who decided to take the witness stand to testify in their defense (Stewart Rhodes, Thomas Caldwell, and Jessica Watkins) allegedly lied.

“But it’s important to ask not just whether they lied. Ask yourself, why? Because the truth is so damning,” Nestler emphasized.

The government told the 14 jurors that the defendants deleted evidence that could prove even further their plan to breach the Capitol on Jan. 6, 2021.

James Bright, the attorney for Rhodes, asked the jury how the Oath Keepers could conspire as early as November 2020 to storm the Capitol on Jan. 6, 2021, if the Jan. 6 rally wasn’t announced until late December 2020.

Rhodes founded the Oath Keepers organization in 2009 to assist in natural disaster situations, Bright said, to volunteer to provide security for small businesses that could not afford security services from a regular company and to offer personal security details for VIPs.

Several members of the Oath Keepers testified during the weeks-long trial, saying that the organization gave them a sense of purpose since most members were retired veterans who found meaning in continuing to serve the country.

During nearly two months of trial, the U.S. prosecutors presented exhibits showing contact between the five defendants on trial and others who allegedly plotted to storm the Capitol on Jan. 6.

Most of the government’s evidence came from the FBI agents assigned to investigate the Jan. 6, 2021, Capitol breach. Text messages, video footage, Signal messages (an encrypted messaging app), and Zello audio recordings (a walkie-talkie app) were frequently shown in the courtroom, among other exhibits.

In his closing argument, defense counsel Bradford Geyer walked the jury through a video where he pointed out that unknown provocateurs broke through the Capitol doors first.

Another defense attorney, David Fischer, explained an unsent message that Thomas Caldwell, an Oath Keeper affiliate, deleted containing a link. That shouldn’t be considered evidence, the attorney said, since a link is not a document. That link was a video available to everyone, Fischer continued.

The prosecution distorted timeframes throughout its presentation of when the defendants walked up the stairs and entered the building, argued Jonathan Crisp, Jessica Watkins’ attorney. He also said that the government’s evidence was mostly out of context. Crisp explained that the stack formation was a way to get through the dense crowd and not for attacking the Capitol.

Only defendants Jessica Watkins, Kelly Meggs, and Kenneth Harrelson entered the Capitol on Jan. 6, 2021. Rhodes and Caldwell did not.

In the aftermath of Jan. 6, the U.S. government charged Stewart Rhodes, Kelly Meggs, Kenneth Harrelson, Jessica Watkins, and Thomas Caldwell with seditious conspiracy, conspiracy to obstruct an official proceeding, aiding and abetting, conspiracy to prevent an officer from carrying out any duties, destruction of government property, civil disorder, and tampering with documents.

Before passing the trial to the jury on Nov. 21 evening, Judge Amit Mehta, an appointee of Barack Obama, reminded the jurors that the trial was against the five defendants on trial and not against the Oath Keepers’ organization.

Edward Tarpley, attorney for Rhodes said, “The judge treated us with respect.”

“There was no evidence ever introduced that there was a plan,” Tarpley told The Epoch Times, “I am grateful for the jury for not finding them guilty on all counts.”

The most recent charge of seditious conspiracy was in 2010 when the government accused nine members of the Hutaree Militia from Michigan of “levy war against the United States.” An FBI agent who infiltrated the militia group provided most of the prosecution evidence.

When the defendants’ trial began two years later, in 2012, U.S. district judge Victoria Roberts dismissed the conspiracy charges. The judge explained that the government’s evidence mainly consisted of the defendants’ controversial speech protected by the First Amendment and did not prove the group’s alleged plan to overthrow the government.

The U.S. government pressed multiple charges, including attempted murder and seditious conspiracy, against five members of the Puerto Rican Nationalists who attacked the Capitol in 1954. The group opened fire on the House of Representatives and injured five Congress members.

Another seditious conspiracy charge was pressed in 1995 against Sheikh Omar Abdel-Rahman and nine of his followers. They were found guilty of planning to bomb bridges, tunnels, and other landmarks in New York City.

In 2006, Adam Gadahn was the first American charged with treason since World War II. He “gave al Qaeda aid and comfort … with intent to betray the United States.”