There’s been a flurry of threats and counter-threats after pro-Iran allies in Lebanon, Syria and Iraq were all hit in suspected Israeli strikes in the space of less than 24 hours, signalling a new aggression out of Tel Aviv and willingness to risk yet another major Middle East war. Indeed Lebanon’s southern border with Israel is heating up once again in the worst tensions since the devastating 2006 war.

Hezbollah secretary general Hassan Nasrallah has vowed to shoot down any Israeli aircraft violating Lebanon’s sovereign airspace after early Sunday a pair of drones targeted Hezbollah offices in south Beirut, and further after a follow-up drone strike reached deep into Lebanon, killing a Palestinian paramilitary commander (of the PFLP-GC) in the Bekaa Valley.

Simultaneously, Lebanese President Michel Aoun on Monday said the drone strikes amount to a “declaration of war” and convened an emergency meeting of the country’s top military and security chiefs.

Meanwhile in a potential return to the precise lead-up to the month-long 2006 war, which saw the Israel Defense Forces conduct a heavy bombing campaign across southern Lebanon all the way into Beirut, including the international airport, Tel Aviv is now signaling its forces won’t differentiate between Hezbollah and the Lebanese state.

This according to Axios’ Barak Ravid, who described a phone call between Pompeo and Lebanese Prime Minister Saad Hariri:

Israeli officials tell me Netanyahu told Pompeo in their phone call on Sunday that he should convey to Hariri that if Hezbollah attacks Israel, Israel won’t differentiate between Hezbollah and the Lebanese government and will retaliate against the Lebanese state as a whole.

Pompeo had over the weekend expressed support for Israel’s ability to “defend itself” from the encroaching “Iran threat”. Specifically during the latest weekend Israeli strikes on Syria officials claimed to have thwarted an Iran-backed “killer drone attack” being planned.

In 2006 Israel waged “total war” on Lebanon, bombing cities, villages, roads, and infrastructure in its failed attempt to root out Hezbollah. 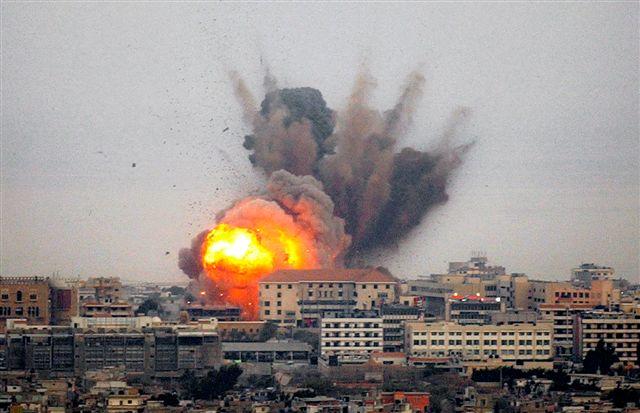 Meanwhile, during the evening hours (local time) along the Israeli-Lebanon border the IDF has reportedly been releasing flares over the area amid concerns Hezbollah could be ready to launch an attack.

Nasrallah during his Sunday speech warned that the Israeli military would soon face a reprisal attack.

“I say to the Israeli army along the border, from tonight be ready and wait for us,” he said. “What happened yesterday will not pass.”

“We will not allow the clock to be turned back. We will not allow Lebanon to be violated by bombardment, killing or explosions, nor the violation of sanctities. This for us is a red line,” Nasrallah said.

He was specifically echoing words used by Israeli officials during the 2006 war, who said they would unleash destruction on Lebanon which would “turn back the clock” on its national development.