When it comes to the equity market, between the Trump and Powell puts, there appears to be nothing in this world – literally – that can put a dent in stock price. In what Bank of America’s CIO Michael Hartnett calls a “Miracle on Wall Street” in his latest Flow Show weekly, he lists a barrage of negative catalysts including: i) yield curve inversion, ii) US-China trade war, iii) recession in Germany, iv) collapse in Chinese industrial production, v) contraction in global profits, vi) oil price spike, vii) BREXIT, viii) Trump impeachment inquiry, ix) Argentine default/Ford downgrade, x) Thomas Cook bankruptcy…and yet risk assets close to all-time highs and US stocks on course for 30% annualized returns, global stocks 24%, commodities 17%, global IG & HY bonds 14%, US Treasuries 10%… or as he concludes laconically, this is “breathtaking stuff.”

However, the party ends next year (as the presidential election looms) and BofA remains 2020 rationally bearish, when the bank’s chief market strategist expects the bond bubble to pop and induce “big top” in credit (spreads trough) & equities (multiples peak), causing a Wall St deleveraging & Main Street recession. Of course, a broad economic recession just months before the presidential election would also have a dramatic impact on the election of the next US president, and may usher in MMT (i.e. helicopter money) far sooner than most had anticipated. 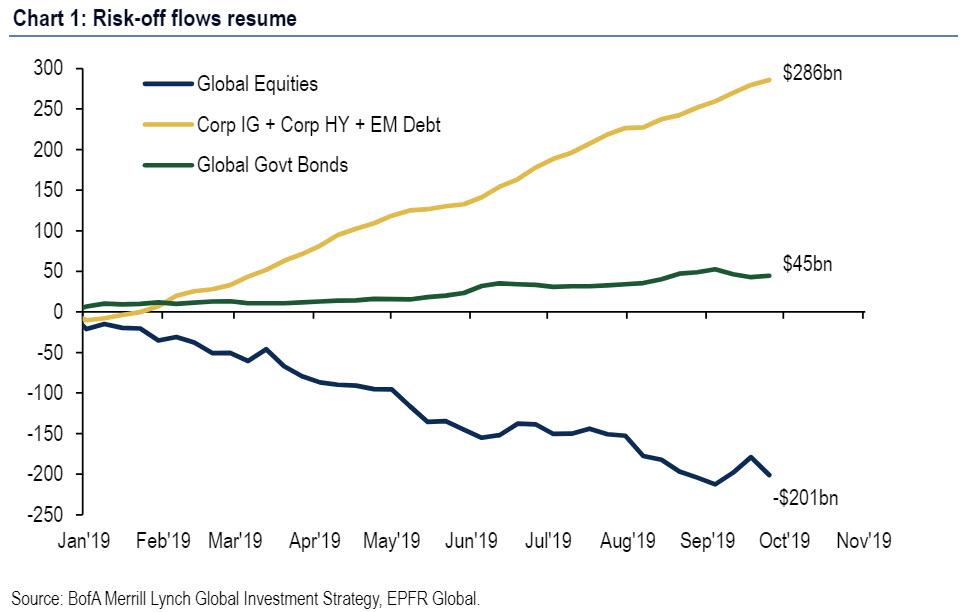 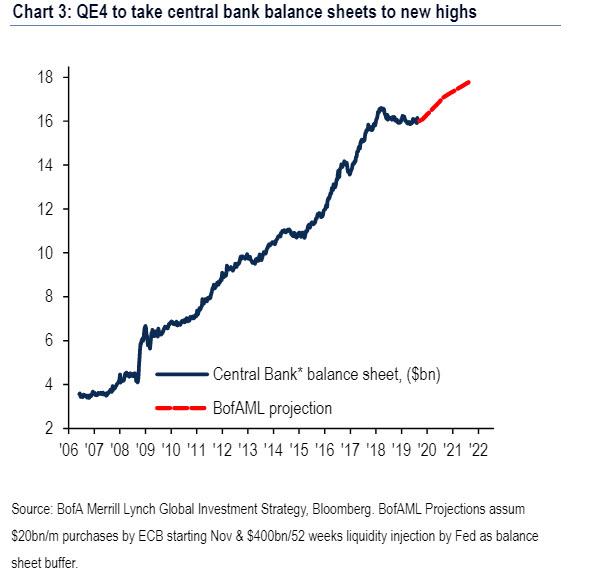 … while the stock of negative-yielding bonds will soon resume rising and surpass its prior record of $17 trillion, all of which BofA finds to be maximum bullish for Wall Street… at least until the moment if impotence arrives, at which point it’s more or less game over.

Meanwhile, as we near the point of “maximum liquidity”, we also hurtle toward the point of “minimum growth”, with Hartnett reminding us that the BofA Global EPS Model forecasts -6.8% EPS growth next 12-months vs. consensus -2.8%, with the inflection point higher in global profits the “missing “ingredient to more sustained multi-quarter rotation from deflation to inflation assets.

In short, we are back to square one, as the playbook from the early 2010s – minimum growth & maximum liquidity – is applied all over again:

It’s not just the market that is experiencing a 2010s deja vu: the next chart shows key macro drivers of 2010s – steady GDP in US, accelerating EPS in US, weaker GDP in China, stagnation in Japan & Eurozone, lower CPI, collapsing rates & yields.

That said, three catalysts can change this in the 2020s, and break the cycle: 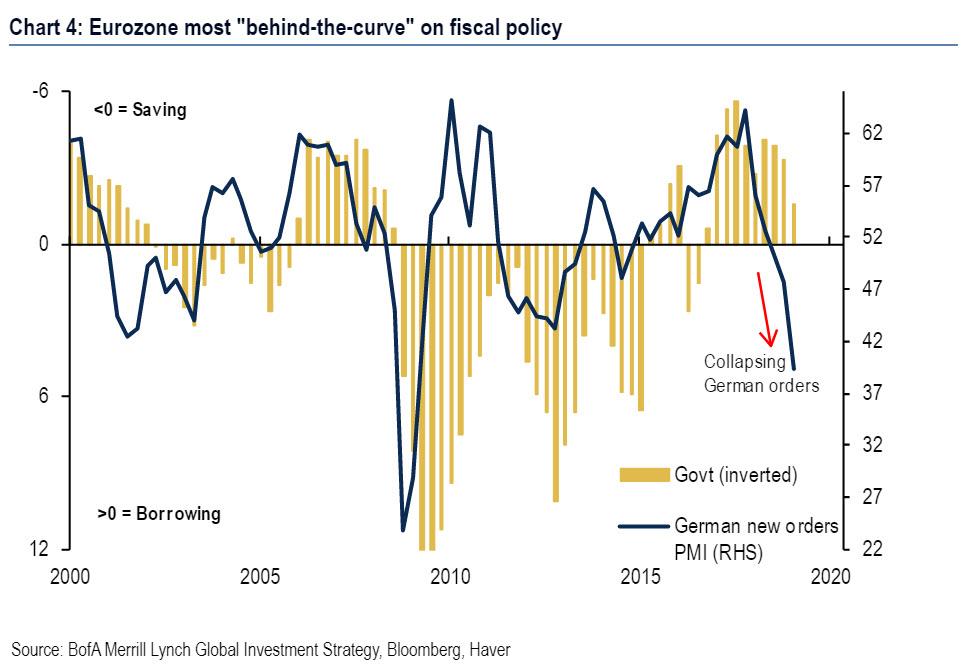 … could herald shift to left towards redistributive policies of higher regulation & higher taxation harming US EPS. 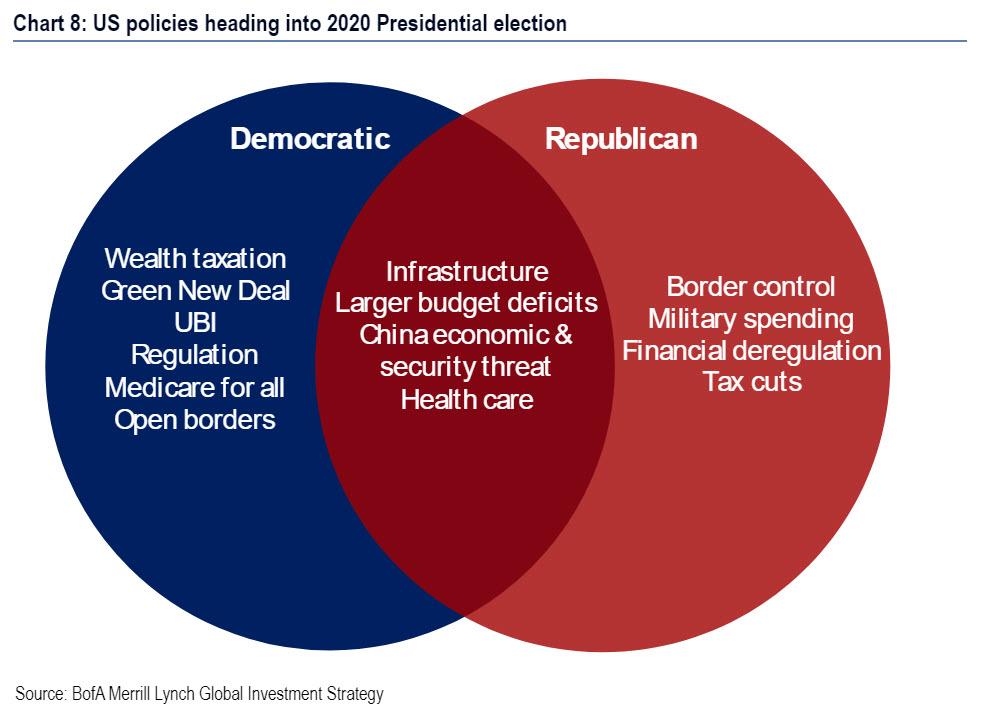 That means that if the Clinton impeachment a harbinger of what comes next, expect an even more pressing and dramatic financial or geopolitical crisis to be unleashed somewhere in the world, which will force even more easing by the Fed, and in turn send stocks to even recorder highs, before the next and perhaps final bubble bursts, send stocks crashing to new generational lows. The only question is whether Trump will successfully delay this day of reckoning to beyond November 2020. And once we cross that point, the collapse will be just a matter of time, as will be the launch of MMT under president AOC/Warren in 2024 and the end of the US Dollar as a reserve currency.

Trader Warns “Fear Of Being Underweight” Is Not A Compelling Narrative