As Hong Kong ATMs Run Out Of Cash, Central Bank Steps In To Prevent “Panic Among The Public”

As Hong Kong ATMs Run Out Of Cash, Central Bank Steps In To Prevent “Panic Among The Public”

As the violence in Hong Kong escalates with every passing week, culminating on Friday with what was effectively the passage of martial law when the local government banned the wearing of masks at public assemblies, a colonial-era law that is meant to give the authorities a green light to finally crack down on protesters at will, one aspect of Hong Kong life seemed to be surprisingly stable: no, not the local economy, as HK retail sales just suffered their biggest drop on record as the continuing violent protests halt most if not all commerce:

We are talking about the local banks, which have been remarkably resilient in the face of the continued mass protests and the ever rising threat of violent Chinese retaliation which could destroy Hong Kong’s status as the financial capital of the Pacific Rim in a heart beat, and crush the local banking system. In short: despite the perfect conditions for a bank run, the locals continued to behave as if they had not a care in the world.

Only that is now changing, because one day after a junior JPMorgan banker was beaten in broad daylight by the protest mob, a SCMP report confirms that the social upheaval has finally spilled over into the financial world: according to the HK publication, the local central bank, the Hong Kong Monetary Authority, was forced to issue a statement warning against a “malicious attempt to cause panic among the public” after rumors were spread online about the possibility of the government using emergency powers to impose foreign-exchange controls. 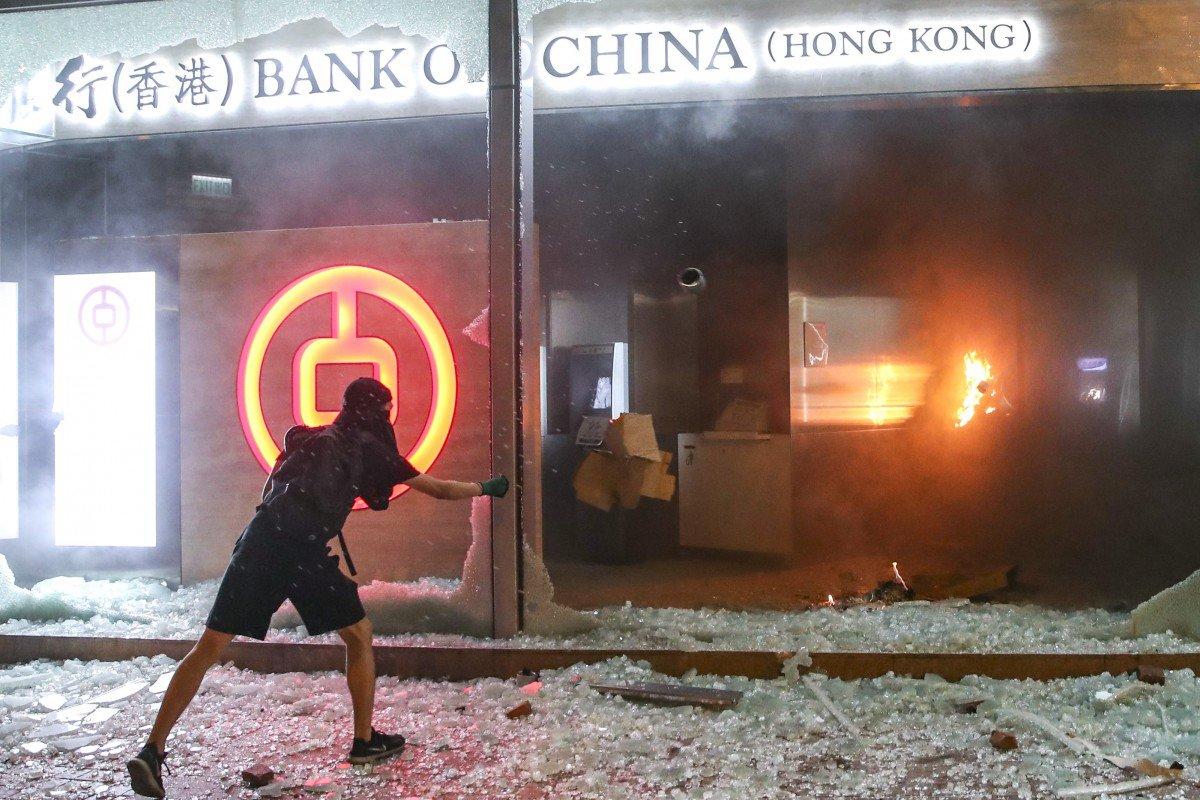 And while the de facto central bank stressed that the banking system remained robust and well positioned to withstand any market volatility, some of the statistics it provided gave a rather troubling impression: the monetary authority said that not only were more than 10% of 3,300 ATMs damaged and could not function, but that banks were negotiating with logistics firms to refill cash machines as 5% of them had run out of money, adding that banknote delivery was affected by the closure of shopping malls and MTR stations.

Will this be enough to prevent a bank run on the remaining ATMs? The answer will largely depend on what happens in the next 24-48 hours in Hong Kong, although the signs are grim.

Earlier in Saturday, Hong Kong’s embattled leader, Chief Executive Carrie Lam Cheng Yuet-ngor, appealed to the public to condemn protest violence and disassociate themselves from rioters, saying the chaos they unleashed across the city the previous night after the announcement of a ban on the wearing of face masks at public assemblies was the reason such a controversial restriction had to be imposed in the first place.

In a five-minute taped video released on Saturday afternoon, a grim-faced Lam, flanked by 14 of her top officials, slammed those who were responsible for the “outrageous” rampage. After rioting mobs trashed MTR stations, set a train on fire and assaulted railway staff on Friday night, the entire network remained closed on Saturday, depriving citizens of their primary mode of public transport. It remained uncertain whether it would open on Sunday.

“Horribly violent incidents took place in various districts in Hong Kong last night. The extreme acts of the masked rioters were shocking and the level of vandalism was unprecedented,” Lam said.

“The extreme acts of the rioters brought dark hours to Hong Kong last night and half-paralysed society today. Everyone is worried, anxious and even in fear.”

Meanwhile, Hong Kong is on the verge of complete socio-economic paralysis as dozens of shopping centres, retail outlets, grocery stores and banks did not open for business for fear of more protest violence and vandalism.

Lam mentioned the case of a plain-clothes officer who was beaten and burned with petrol bombs by a mob in Yuen Long, saying he “had no choice but to shoot in self-defence”, wounding a teenager who was later arrested on charges of taking part in a riot and assaulting police. The violence provided solid grounds for imposing the anti-mask law, she said, defending the government’s decision to introduce it by invoking the tough colonial-era Emergency Regulations Ordinance for the first time in more than half a century.

“The government will curb violence with utmost determination,” she said. “Let’s condemn violence together and resolutely disassociate with rioters.”

Alas, if she had hoped her address would ease tensions, she was wrong: even as Lam’s video message was being broadcast on television and shared on the internet, hundreds of Hongkongers, many of them masked, started to march from Causeway Bay to Central to protest against the ban.

One of the marchers, a 22-year-old named Louie, said it was unfair of Lam to ask the public to shun masked rioters.

“She is making us a target even though we are the ones fighting for our freedom as Hongkongers,” she said. “Masks hold an important symbol in Hong Kong. We used masks during the Sars [severe acute respiratory syndrome] outbreak of 2003 and to protect ourselves against tear gas. It’s a symbol of resistance and you cannot take that away from us.”

Earlier on Saturday, Security Secretary John Lee Ka-chiu made a similar appeal for the public to stop supporting the rioters, while dismissing accusations that the government had added fuel to the fire with the mask ban.

“The introduction of the anti-mask regulation is to make sure that those who commit crimes and commit violence will have to face justice, so that they cannot hide behind their masks to escape their responsibilities,” Lee said.

“What is adding oil to violence is people’s support for these acts or people’s acquiescence in finding reasons for this violence to continue. So what is important is that everybody comes out to say, ‘No, society will not accept violence.’”
Lee noted that no one had been arrested yet under the new law that came into effect on Saturday.

Justice Secretary Teresa Cheng Yeuk-wah said the government would not rule out tougher measures using emergency powers if the protests continued to spiral out of control. These could include extending detention hours for those arrested and directly funding police without prior scrutiny by the legislature.

Ultimately, however, it will be up to China: does Beijing allow the protests to gather ever more momentum and international support before it intervenes, or will the People’s Liberation Army finally make a grand entry and begins the crackdown that marks the beginning of the end for Hong Kong as the financial pearl of the orient.

For an indication of what happens next, keep an eye on bitcoin: as we reported previously, LocalBitcoins, a popular platform for directly trading Bitcoin peer-to-peer, posted its highest trading volume ever in Hong Kong last week.

And if the local ATMs just happen to “run out” of money, watch as Hong Kong demand for bitcoin and other altcoins – not to mention gold – sends shockwaves across the world… and prices sharply higher. 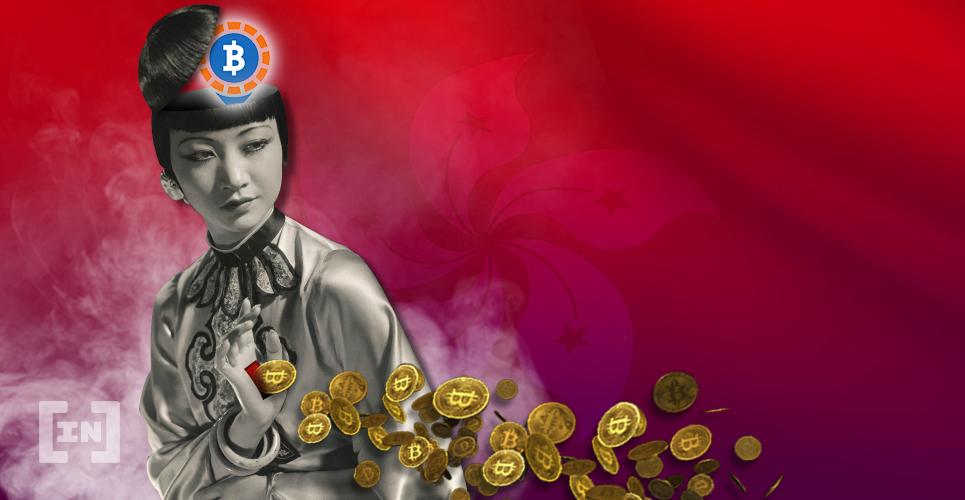