Authored by Michael Shedlock via MishTalk,

Many problems today including deficit spending, trade deficits, and income inequality have their roots in 1971.

A reader asks “What Forced Nixon to Close the Gold Window in 1971?”

The answer is called “Nixon Shock”.

Nixon wanted to fight the war in Vietnam, not raise taxes, and not hike interest rates to finance it.

Arthur Burns, not Volcker was at the Fed.

American economist Barry Eichengreen summarized: “It costs only a few cents for the Bureau of Engraving and Printing to produce a $100 bill, but other countries had to pony up $100 of actual goods in order to obtain one”.

The dollar exodus had its beginnings way back in February 1965 when President Charles de Gaulle announced his intention to exchange its U.S. dollar reserves for gold at the official exchange rate of $35 per ounce.

Lyndon Baines Johnson was president. The War in Vietnam and Johnson’s “War on Poverty” accelerated the US deficit and inflation.

On a campaign that promised to restore law and order to the nation’s cities and provide new leadership in the Vietnam War, Richard Nixon won the election in 1968.

Our Currency But Your Problem

Shortly after taking the Treasury post, Connally famously told a group of European finance ministers worried about the export of American inflation that the dollar “is our currency, but your problem.”

By 1971, US money supply had increased by 10%. In May 1971, West Germany left the Bretton Woods system, unwilling to revalue the Deutsche Mark. Switzerland also started redeeming dollars for gold.

On August 5, 1971, the United States Congress released a report recommending devaluation of the dollar to protect the dollar against “foreign price-gougers”.

On August 9, 1971, as the dollar dropped in value against European currencies, Switzerland left the Bretton Woods system.

On August 15, 1971 Nixon directed Connally to suspend, with certain exceptions, the convertibility of the dollar into gold or other reserve assets, ordering the gold window to be closed such that foreign governments could no longer exchange their dollars for gold. He also issued Executive Order 11615, imposing a 90-day freeze on wages and prices in order to counter inflation. This was the first time the U.S. government had enacted wage and price controls since World War II.

The American public believed the government was rescuing them from price gougers and from a foreign-caused exchange crisis. Politically, Nixon’s actions were a great success. The Dow rose 33 points the next day, its biggest daily gain ever at that point, and the New York Times editorial read, “We unhesitatingly applaud the boldness with which the President has moved.”

So Much for Temporary

The move was not temporary. There have not been any restraints on deficit spending since.

In 2011, Paul Volcker, who replaced William Miller as Fed Chair in 1979, expressed regret over the abandonment of Bretton Woods.

“The Europeans couldn’t live with the uncertainty and made their own currency and now that’s in trouble.”

In contrast, Paul Krugman said a country “can print as much or as little money as it deems appropriate. There are powerful advantages to such an unconstrained system.”

Contrary to Trump’s touting, his trade war battle isn’t about NAFTA or the WTO. 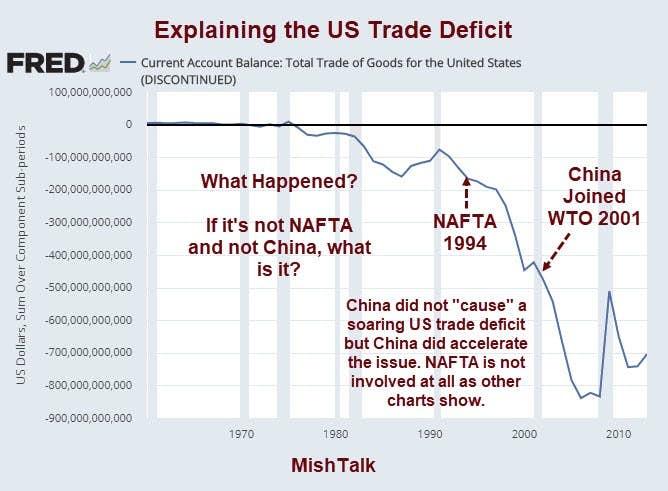 Nobody Wins, But Germany and EU Hurt Most in Global Trade War

As I explained in Nobody Wins, But Germany and EU Hurt Most in Global Trade War Trump is fighting a battle that cannot be won.

The roots of this crisis stem from Nixon closing the gold window in 1971.

China’s inclusion into the WTO exacerbated the trade problems but did not cause them.

Even if the US had a higher pain tolerance, the US cannot possibly win a trade war.

Here’s the short answer, once again as to why Nixon closed the gold window: Nixon wanted to fight the war in Vietnam, not raise taxes, and not hike interest rates to finance the war.

Failure of the London Gold Pool

Inquiring minds may wish to read about the Failure of the 1960s London Gold Pool for more interesting details.

Sound familiar with the current trillions of dollars blown in Afghanistan?

With Japan’s building bridges to nowhere to fight deflation?

With negative interest rates in Europe and Japan?

With Trump howling about the strong dollar?

Every country wants to devalue its currency to raise exports and have a current account surplus.

Many expect China to overtake the US and for the yuan to replace the dollar as the world’s reserve currency.

Such talk is nonsense. The reserve currency holder needs to meet several requirements of which China meets none.

In Forget the Yuan, King Dollar is Here to Stay, I note 6 reasons why the Yuan will not replace the dollar.

Despite moaning about the dollar, China does not want to have the world’s reserve currency because it implies running trade deficits in which other nations accumulate yuan reserves.

Japan and the EU (led by Germany), don’t want to have the reserve currency “advantage” either, for the same reason:

Please read the above lines over and over until it sinks in.

The reserve currency irony is that despite protestations of US advantage, no country wants the alleged advantages the US purportedly receives.

Trump would be very pleased if the Yen, yuan, and Euro rose vs the dollar, and US exports rose.

Does Japan want a strong currency? China? The EU?

Since no one really wants it, having the reserve currency is best viewed as a “curse” not an “exorbitant privilege”.

If you peel off the layers hidden over the years, Trump’s trade wars are really an effort by Trump to shed the “reserve currency curse”.

The US is stuck with the reserve currency because we have the largest, most open capital markets in the world, the world’s largest bond market, and a far better business climate than the EU, China, or Japan.

To ensure the US remains the curse holder, the EU and Japan have negative rates, China does not float the Yuan but props up corrupt SOEs, and Germany punishes the rest of the EU.

Everyone wants to export to the US, and they do.

The result is a currency war with everyone hoping to devalue their currencies against the dollar.

As a direct result, and aided further by better US demographics, US consumers have become the global consumers of last resort.

It’s part of the curse.

I was discussing from the point of view of what every country wants, however, illogical. https://t.co/oWPZf8SKzf

Ironically, the curse is imaginary as the above Tweet discusses. It’s the strive to remove the curse that’s damaging.

Since the dollar is still rising (thanks to European, Japanese, and Chinese tactics), It may take even bigger US deficits before something major breaks.

On that score, both political parties in the US are poised to deliver increasing deficits as far as the eye can see.

Meanwhile, negative interest rates are destroying the European banks. For discussion of this important issue, please see In Search of the Effective Lower Bound.

A currency crisis awaits as the current path is not sustainable.

Timing and conditions of the crisis are not knowable. It can start anywhere but I suspect the EU, Japan, or China as opposed to the US.

Meanwhile, I suggest holding at least some gold.