31-year-old Croatian entrepreneur Mate Rimac – who has created batteries for companies such as Aston Martin, Renault and Koenigsegg – has built his own all-electric hypercar: the Rimac C_Two. 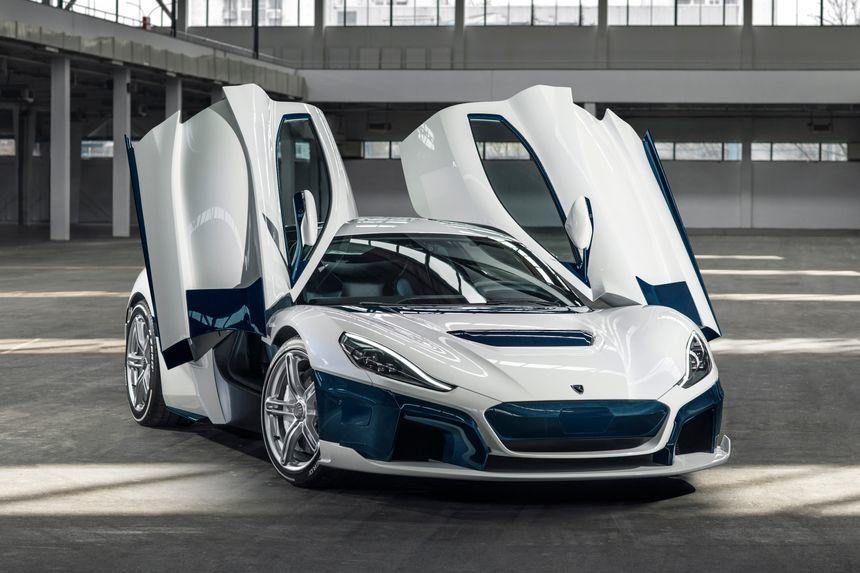 The beast of a car produces 1,914 hp from four permanent-magnet motors, which propel it to a top speed of 412 km/h (256 mph). 0-60 comes in a blistering 1.85 seconds (Tesla’s next-gen Roadster does 0-60 in 1.9 seconds). Perhaps even more amazing is that Rimac is a magician when it comes to battery technology – which gives the C_Two a range of 340 miles on a single charge.

On display in the factory’s modest reception area is the battery pack from the Koenigsegg Regera gas-electric hybrid supercar. This brick of circuitry is, Rimac claims, the highest power-density battery of its kind, capable of discharging at 500 kilowatts—about the output of a Dodge Hellcat at full honk—from a box weighing 143 pounds, about the size and shape of a sofa cushion. –WSJ

“I think [Mr. Rimac] is a genius,” said Heiko Mayer, powertrain project leader for Porsche’s all-electric Taycan – telling the Journal‘s Dan Neil “I think he is going to be a legend.”

Why are all these major brands coming to Rimac for his expertise? Niel asked. Rimac, in “impeccable, softly accented English” was quick to credit his staff. “It’s a lot of optimization, trying out things, experimenting, being fast, doing loops—idea, concept, simulation, detailed prototyping, again and again.”

Except, Niel noted, Porsche R&D does the same thing – to which Rimac “chose his words carefully” – saying that original equipment manufacturers (OEM)s have to be more “conservative on the technology side.”

An example is the new Porsche Taycan, which arrived with less range than the comparable Tesla Model S. “Tesla and [Rimac] both use cylindrical cells. But it’s much more difficult to build than with prismatic cells [like the Taycan’s], there’s many more parts, much more that could go wrong.”

Conservative is one thing Rimac isn’t. For example, none of the company’s technology is currently patented. “We believe that if somebody is that good that they can copy us, go ahead, man, you deserve it. We are so fast that we are already two generations in front before [we] can protect it.” –WSJ

None of Rimac’s designs are patented. To that end, he said “We believe that if somebody is that good that they can copy us, go ahead, man, you deserve it. We are so fast that we are already two generations in front before [we] can protect it.”

The man, the myth

When Rimac began his automotive endeavors, there were no automakers, or even component manufacturing, in Croatia. “When I started [in 2011], there was no outside investment,” he said. “nobody I could learn from, nobody growing a business. Even stupid things like finding a lawyer who could communicate to investors.”

“And absolutely no market, no companies I could hire from with any experience,” Rimac continued. “Nobody knew how to develop a chassis, develop a suspension, how to build up a crash test car, how to develop headlamps…”

In 2016, Rimac produced his Concept_One – which had 1,224 hp and was promptly crashed by British presenter Richard Hammond on a Swiss hillside.

Now, Rimac has around 600 employees and has “thoroughly outgrown its facilities.”

A new campus will be built on 54 acres of Croatian countryside “complete with 15th-century castle, located a few minutes away.”

The new complex will have green roofs and farm animals—he himself is a vegetarian and hopes the animals’ presence will disincline meateaters—as well as outdoor meeting rooms, barbershops, restaurants, a kindergarten, and a hotel in the woods for guests. Along with R&D and component production, the facility will produce a small number of Rimac’s own hypercars, no more than three or four per month. “At $2 million per car, it’s not small business,” he said. –WSJ

That said, there are sacrifices.

“Is this all good for me? Certainly not!” said Rimac, smiling. “Doing something like this is sacrificing everything else. This is something I accepted. I don’t have time, for my friends, for myself.”

As far as Rimac and Musk? “I’ve never talked to him,” he said, adding “I would really like to kick things around.”