For a while it appeared the EU was ready to negotiate with Johnson. Perhaps appearances were deceiving…

Only Way to Bridge the Backstop

If the EU were to reject the current proposal flat out, that would change. The EU should consider very carefully that Johnson yesterday managed to receive support not only from the DUP, but also from the rebel Tories who lost their whip over the Benn extension legislation. The EU does not want to give Johnson a believable excuse for a no-deal Brexit: having come up with a reasonable proposal whose rejections indicates that the EU was not serious even to engage with the idea of a dual border – one for customs and one for regulation. We think that duality is not only a reasonable starting position, but in fact the only way to bridge the differences over the backstop.

The amount of trade between the UK and the EU was over £600bn. Intra-Irish trade flows were about £5bn. Should the EU really want to endanger a large portion of the £600bn on the grounds that it is possible to blame Johnson for a no-deal Brexit? That would strike us as an entirely irrational strategy.

My position has been that deals in the EU magically happen at the last second after everyone gives up on them. I also cited trade differential noting in particular German Carmakers Warn “Seismic” and “Devastating” No Deal Consequences

We have seen that time and time again, with German Chancellor Angela Merkel or someone else moving from a fixed position at the end.

After movement towards a deal last week, France seems to have hardened its position. French President Emmanuel Macron told Johnson that his offer was not even a starting point.

Johnson warned ‘Don’t Be Lured Into the Mistaken Belief that the UK is Staying in the EU’.

Unfortunately, that appears to be precisely what has happened. The EU is taking its cues from Remainers who are hopelessly splintered.

Let’s check back in with the Monday morning Eurointelligence view, emphasis mine.

This morning, the Telegraph reports that he is now preparing to launch legal action against the Benn Brexit extension bill. We don’t think that this has any chance of succeeding, but the point of this action is political: he is seeking to demonstrate that the organs of the state conspire to subvert Brexit. The article suggests that Johnson may himself give evidence to the court. What appears to be a chaotic strategy has the sole purpose to demonstrate that he is doing his best to deliver Brexit.

So this is now our most likely scenario – from today’s vantage point: the EU does not agree to a deal; Johnson is dragged kicking and screaming into an extension; he wins the ensuing elections; a no-deal Brexit follows.

Most Likely Scenario – No Deal

That is the first time Eurointrelligence has held that view.

Wolfgang Munchau writes that the EU should not dismiss the underlying idea in Boris Johnson’s offer: the separation of a customs border from the regulatory border. The proposal itself cannot be a final offer.

Munchau writes the EU can only politically agree withdrawal agreements that keep the UK aligned as closely as possible with the EU. France fears that the UK might seek a competitive advantage after Brexit. The conclusion is that the EU will always extend the Brexit deadline but, as Munchau says, that strategy is short-sighted and ultimately self-defeating.

In particular, it critically misjudges UK politics. Opinion polls continue to show a widening lead of the Tories over the opposition parties. An Opinium poll in the Observer also showed that Labour has regained its lead over the LibDems. What we think is widely underestimated in Brussels is that the current alignment in UK politics strongly favours a no-deal Brexit. The chaos in British politics is benefiting Johnson more than it benefits opposition leaders. With every court battle, we expect Johnson to consolidate his political position.

Something happened today in the UK parliament that show the extent of political power consolidation. A Tweet chain has the results. 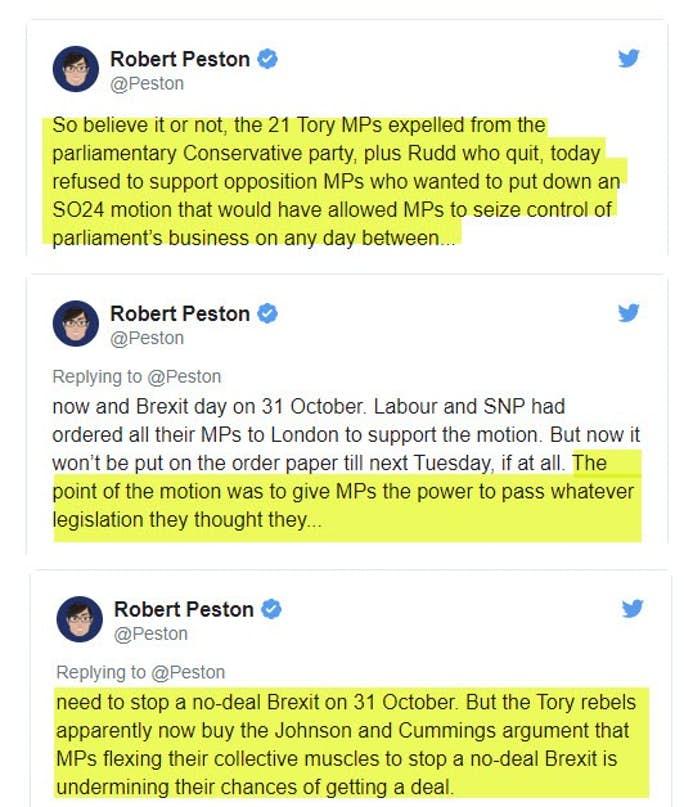 Note the irony of point 4.

The DUP, rebel Tories, hardline Tories, and even some Labour MPs are all willing to go along with an Irish Sea solution.

As noted in Brexit Irony: EU Rejects Its Own Proposal the EU proposed a border in the Irish Sea and Theresa May rejected that offer because DUP would not go along.

Theresa May instead accepted the worst possible deal for the UK.

Miscalculation or On Purpose?

France may very well want the UK out on a hard deal for reasons we don’t fully understand. That said, Germany does get hit harder than France in a No Deal setup.

But perhaps Eurointelligence has this right. The EU has seriously misjudged UK politics.

And that’s another irony in this mess. It was the UK who for the longest time misjudged the EU.

The final irony is that by attempting to take “No Deal” off the table, Remainers just may have sealed the fate.

Even the expelled Tories have had enough.

It’s now clear that taking No Deal off the table was a gigantic lie from the start.