Madsen: The Plot To Overthrow The Pope

Madsen: The Plot To Overthrow The Pope

Authored by Wayne Madsen via The Strategic Culture Foundation,

The moment that Cardinal Jorge Bergoglio of Argentina was elected the first Jesuit Roman Catholic pontiff in papal history, the political long knives aimed at Pope Francis I came out of the shadows of the Vatican. 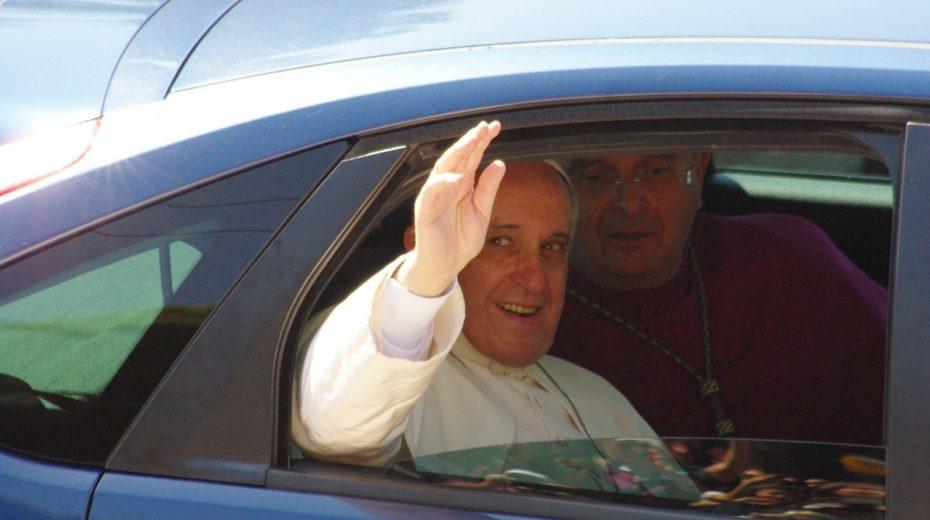 From the outset of his papacy, Francis found himself dealing with his right-wing predecessor, Pope Benedict XVI – a rarity in papal history – who insisted on remaining domiciled in an apartment on Vatican grounds. Benedict has not remained in quiet retirement but has conspired with Francis’s politically influential enemies in the Vatican, Italy, the United States, and other countries.

Donald Trump, who has publicly criticized Francis, has not interfered as his surrogates, who include former White House strategist Steve Bannon; Cardinal Raymond Burke, the former Archbishop of St. Louis; Archbishop Carlo Maria Viganò, the former Apostolic Nuncio to the United States; and others have conspired with the powerful fascist-oriented Opus Dei sect of the church to undermine Francis’s authority. Trump’s eyes and ears inside the Vatican – US ambassador to the Holy See Callista Bisek Gingrich – is the wife of Newt Gingrich, the former Republican Speaker of the US House of Representatives, a convert to Catholicism, and a major Trump political ally.

Francis, a former bar bouncer in a tough working-class neighborhood of Buenos Aires, has not been a shrinking violet when it comes to fighting back against his right-wing enemies. Francis’s Italian parents were escaping Benito Mussolini’s fascist rule when they emigrated to Argentina. For Francis, defending the church against the fascist Opus Dei and its allies is a battle worth fighting.

Francis’s enemies have taken a page from the Trump political book. Francis vowed to clean up the church of pedophile priests but he has been charged by his right-wing enemies, including Vigano, Burke, Bannon, Opus Dei, the Franciscan Friars of the Immaculate, and from behind the scenes – Benedict – of tolerating pedophiles and homosexuals in the church. This is the same sort of gaslighting to which Americans have become all-too-accustomed under Trump.

In order to limit Cardinal Burke’s international reach, Francis suspended him from the post of patron of the Sovereign Military Order of Malta (SMOM), an autonomous international charity entity in Rome that issues its own passports and maintains diplomatic relations with 107 countries and maintains permanent observer status at the United Nations. In 2017, Francis came to the assistance of the Grand Chancellor of the SMOM, Albrecht von Boeselager, after discovering that Burke and Opus Dei were conspiring to oust Boeselager, a member of a German royal house, as Grand Chancellor. Burke and the rightists wanted to sack Boeselager for distributing condoms to people in Myanmar. Francis suspended Burke and appointed Archbishop Giovanni Angelo Becciu as the Pope’s special envoy to the SMOM. Francis is now assured that with Boeselager and Becciu as his eyes and ears inside the SMOM, the rightists and Opus Dei are checkmated when it comes to using the diplomatic offices of the SMOM for their own purposes. Francis also banned the right-wing Franciscan Friars of the Immaculate from conducting public masses in Latin. As far as limiting the power of the rightists inside the Vatican City State, Francis appointed Cardinal Óscar Rodríguez Maradiaga from Honduras as his enforcer to rid the Vatican hierarchy of the pro-Benedict faction, as well as pedophile enablers and financial fraudsters, money launderers, and embezzlers.

Francis told the Italian newspaper “La Repubblica” that Roman Catholic officials have often been “narcissists, flattered and thrilled by their courtiers,” adding, “the court [the Vatican curia] is the leprosy of the papacy.”

On October 1, 2019, Francis ordered Vatican police to seize documents, computers, and portable electronic devices from the Vatican Secretary of State and the Financial Information Authority, the latter the financial watchdog of the Vatican. In addition to these two offices, Francis has also placed the Institute of Religious Works (IOR), the so-called “Vatican Bank,” under increased supervision and control. The IOR has been misused in the past for a number of covert operations, including the funding of several right-wing Central Intelligence Agency-linked terrorist groups and death squads in Latin America, particularly the Argentine Anticommunist Alliance (AAA), or “Triple A.”

Francis was also instrumental in denying to Bannon and Burke the use of a 13th century monastery, the Certosa di Trisulti in Collepardo in central Italy, as a training academy for neo-fascist political operatives from around the world. Bannon’s Brussels-based international “neo-fascisti” grouping, called “The Movement,” had made a deal with a group connected to Burke, the Institute of Human Dignity, or Dignitatis Humana Institute, to lease the 800-room monastery for political training. Burke is the president of the institute’s board of advisers, which provides a direct link between Burke and Bannon. Eleven Cardinals, all opponents of Francis, are on the board of advisers, including Walter Brandmuller; Edwin O’Brien, former Archbishop for the US Military Services and a proponent of the “Just War”; Robert Sarah, the former Archbishop of Conakry, Guinea and an opponent of large scale immigration; Peter Turkson of Ghana; Archbishop Malcolm Ranjith of Colombo, Sri Lanka; including US military intervention in Syria; and Joseph Zen Ze-kiun, a former Bishop of Kong Kong and leading opponent of China’s policies. Benjamin Harnwell, a noted conservative British Catholic, is the President of the Institute’s Board of Trustees. Bannon is both a member of the Board of Trustees and a patron of the institute.

Bannon called the proposed school the Academy for the Judaeo-Christian West. The Institute of Human Dignity and its British connections has led many to believe that it is also politically connected to the increasingly powerful Catholic wing of the British Conservative Party. Prime Minister Boris Johnson was baptized Catholic and the Speaker of the House of Commons, Jacob Rees-Mogg, is affiliated with right-wing Catholic circles.

From the outset, Francis understood that the Bannon training academy would not only be targeting progressive forces around the world but also his papacy. It was fortuitous for Francis that Nicola Zingaretti, the president of the Lazio region, in which the monastery is located, condemned the lease by Bannon’s group. Zingaretti is a member of the left-wing faction of the Democratic Party, which includes former Christian Democrats and Socialists.

The coup de grace against the fascist academy came in May of this year when it was discovered that the 19-year lease guarantor, a person purporting to be an official of the Jyske Bank of Gibraltar, had forged the lease guarantee letter. On May 31, 2019, the Italian Ministry of Heritage annulled the lease. The forged letter and the financial fraud concerns that led Francis to order files seized from the IOR and the Vatican Secretariat of State are indications that the Catholic right-wing, including Opus Dei, are not conceding defeat but are doubling down using any means necessary, even if they are illegal.

There is little doubt in Rome that Pope Francis and his allies were working as hard as they could to ensure that after the fall of the coalition government of the far-right League or “Lega” and the populist Five Star Movement, Lega leader and Interior Minister Matteo Salvini would not be able to form a new government. Instead, the Democratic Party and the Five Star Movement formed a center-left coalition and Salvini was relegated to the opposition. It has been reported in Rome that Francis appointed Cardinal Pietro Parolin as a special envoy to combat the influences of the neo-fascists in Italy and throughout the European Union. And Francis has picked up an important ally in Forza Italia, the party of former Italian Prime Minister Silvio Berlusconi, now a member of the European Parliament.

Bannon, Burke, and their allies gambled on winning control of an ancient monastery, the SMOM, and the Italian government. Pope Francis saw their bid and raised it. Francis’s royal flush has sent the neo-fascisti forces of Opus Dei, Bannon, and Salvini into a much-weakened opposition. The moral of the story for the fascisti is to never underestimate a one-time bar bouncer. Francis has been as effective in ousting the far-right from their perches of power in Rome as he once was in ejecting unruly drunks from bars in Buenos Aires.