The German government is warning that a number of indicators suggest Europe could be on the brink of witnessing a new refugee crisis explode on its borders.

Germany’s Interior Minister Horst Seehofer said early this week that refugees and migrants are set to flood Europe on a scale even bigger that the peak of the 2015 crisis. “We must do more to help our European partners with controls on the EU external borders. We have left them alone for too long,” he told Germany’s Bild am Sonntag newspaper after returning from a visit to Greece and Turkey, where he inspected the renewed refugee crisis first hand.

“If we do not do that we will once again face a refugee wave like in 2015 or maybe even greater,” Seehofer warned  ominously.

Seehofer further said that if the EU doesn’t unite to find “strength to solve this problem problem” it faces total “loss of control” if and when the next major crisis hits.

At the height of the crisis three years ago, which was driven by the vastly destabilizing wars in Syria and Libya, and by the turmoil left in the wake of the Islamic State caliphate in western Iraq, there were near weekly mass drownings and accidents involving migrants attempting to traverse the Mediterranean, as well as fires and unrest at makeshift refugee camps in France and Greece. It further created turmoil in the domestic politics of multiple EU countries, with a number of right-wing populist figures and parties coming to power on anti-illegal immigration platforms.

And now, with Turkey on the brink of a major military incursion into northeast Syria, the Middle East is about to witness a major new conflagration resulting in potentially millions of new refugees being pushed out of the Turkey-Syria border region.

Coupled with that, Turkey’s President Erdogan recently threatened to release one million refugees on Europe if he can’t have his so-called ‘safe zone’ which is to reach some 30km deep (19 miles) inside Syrian territory. He threatened early last month: “We will be forced to open the gates. We cannot be forced to handle the burden alone,” while demanding that European countries give political support to the controversial plan that would end in annexing UN member Syria’s sovereign territory.

It was the 2015 crisis that saw precisely around a million refugees and migrants flood Europe, crossing by land through the Balkans, as well as making the more dangerous Mediterranean route.

It appears Interior Minister Seehofer is convinced Erdogan is not bluffing, and is warning Europe to be prepared for the chaos to come. Indeed recent figures published by the UN refugee agency (UNHCR), reveal that numbers of migrants crossing by sea from Turkey to Greece are shooting up over the past nine months, compared to the year prior.

Seehofer said of Turkey’s current situation, which is now openly declaring it stands ready to “correct the demographics” of northern Syria by forcibly removing its Kurdish inhabitants, and then move some 2 million Arab Syrian refugees into the ‘safe zone’, that “it is clear that we cannot manage the future with the resources of the past.” This in reference to a prior EU deal with Ankara to take back refugees from Greece for €6 billion in aid. 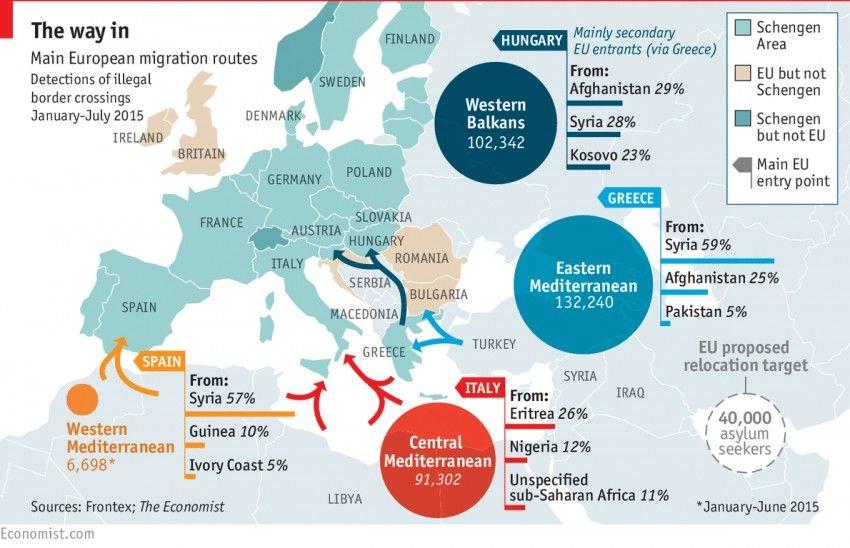 The main migrant routes to Europe at the opening of 2015 which saw a million flood Europe in a short span, something which some are warning is set to be repeated in the coming year.

One thing is for certain, should “all out war” — as the Kurdish Syrian Democratic Forces (SDF) have promised — be the result of the expected imminent Turkish invasion of Syria, there will be a new refugee explosion out of northern Syria and possibly Iraq, given Iraq’s Kurdistan region is precisely where many Syrian Kurdish as well as Christian civilians fleeing Turkish tanks would end up.

This is in addition to a renewed grinding multi-party civil war in Libya unfolding as Gen. Khalifa Haftar’s forces continue their push to wrest the capital of Tripoli from the UN-backed Government of National Accord.