A Constitutional Libertarian’s Perspective on Impeachment 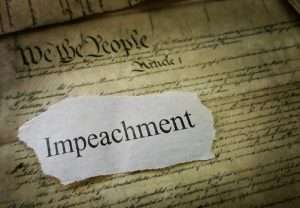 The Vox website has posted an insta-symposium on the White House counsel’s recent letter announcing the president’s refusal to cooperate with the impeachment inquiry initiated by the House of Representatives. The symposium includes contributions by thirteen legal scholars, including the Volokh Conspiracy’s own Keith Whittington, and myself. There is very little disagreement about the awful nature of the arguments advanced in the letter, but more divergence over the question of whether the situation qualifies as a “constitutional crisis” (I myself am skeptical on the latter point, at least so far).

It’s fair to point out that most of the symposium participants are liberals. On the other hand, that definitely is not the case for either Keith or myself, and our assessment of the White House counsel’s letter differs little from that of the others.

Here’s an excerpt from my contribution:

There is room for reasonable disagreement about many aspects of impeachment, including the fairness of the procedures used by the House. But Cipollone’s arguments simply don’t pass the laugh test.

The impeachment power belongs to the House. It applies in situations where there is reason to believe the president has committed “treason, bribery, or other high crimes and misdemeanors.” The founders drafted the impeachment clause to cover a wide range of abuses of power, including ones where there is no violation of criminal law. If Trump withheld aid from Ukraine in an attempt to pressure them into investigating a political opponent, he likely both violated the Constitution and committed a crime.

Article I of the Constitution gives each house of Congress the sole power to “determine the rules of its proceedings.” That includes rules governing impeachment. The House is not bound by the procedural requirements imposed on the criminal justice system. The constitutional requirement of “due process” cited by Cipollone applies to situations where an individual stands to lose her “life, liberty, or property,” none of which is at risk here.

Once the House has decided to conduct an impeachment inquiry, it must have the power to subpoena witnesses and compel submission of relevant evidence. If the president could conceal evidence and ignore subpoenas, Congress’ constitutional authority over impeachment would be seriously undermined. Indeed, failure to cooperate with a congressional impeachment process is itself likely an impeachable offense.

Some of the disagreement over the “constitutional crisis” question may be a result of divergent definitions of what qualifies as such a crisis. Keith and other commentators (including myself) canvassed various competing definitions in an earlier Vox symposium.

A few additional points I planned to make got cut because of considerations of space. Fortunately, we have no such constraints at the Volokh Conspiracy, so I will make them here:

The appropriate rules for a process that might deprive an office-holder of a position of power are not the same as those for one that could deprive the defendant of basic civil liberties. Conflating the two is part of a broader pattern in which many people tend to apply the standards of criminal trials to situations where they are not appropriate.

Even if we do accept the analogy to a criminal trial, Trump still would not be entitled to the rights demanded by the White House counsel. The closest criminal analogy to a House impeachment inquiry is a grand jury proceeding, potentially leading to indictment. Before a grand jury, the defendant does not have any of the procedural rights Cipollone lists.  Such rights are reserved for the  trial which is held if the grand jury chooses to indict the defendant – here the trial held by the Senate, if a majority of the House votes to impeach.

Despite the administration’s claims to the contrary, nothing in either the Constitution or House rules requires the House to authorize an impeachment inquiry with a formal vote, as opposed to doing it through the committee process. Such a vote is no longer necessary to give those committees subpoena powers, ironically  because of a rule change the Republicans made when they last controlled the House. It is reasonable to argue that a vote is desirable for political or other reasons, but not reasonable to claim that it is legally required.

1 thought on “A Constitutional Libertarian’s Perspective on Impeachment”