The WeWork fairy tale has obviously come to an end for the time being, as the company was forced to pull its IPO amidst a chorus of skepticism and outright ridicule after filing its IPO prospectus earlier this year.

And now, the little companies that WeWork trampled on to make its mad dash into becoming the unprofitable behemoth it is today are all ready to strike back, according to Bloomberg.

After WeWork’s historic collapse at the doors of the public market, competitors like IWG Plc, Convene, Industrious and Knotel are now all pitching themselves as far more stable options for rental office space.

In fact, three large U.S. landlords have even reached out to Novel Coworking to see if the company would be interested in buying or managing buildings leased to WeWork.

Novel Chief Executive Officer Bill Bennett said: “Everyone is having conversations behind closed doors. People are trying to find their plan B and plan C.”

It’s a far cry from when WeWork employees would visit competitors, posing as customers, and perform business intelligence recon by photographing their tenant lists and contacting customers with incentives to move. WeWork would also sometimes set up outside of competitors offices with games and couches to try and pitch customers as they walked by. Up until this summer, WeWork was adding more than 1 million square feet per month and had become the biggest private-sector tenant in London, New York and Washington.

WeWork employees told Bloomberg they hadn’t even heard of the IPO troubles (yeah, sure), while customers say that the company’s day to day feels normal. 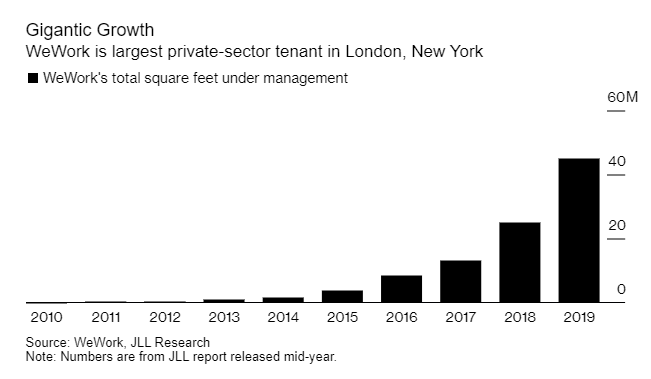 According to the Wall Street Journal, Nori Gerardo Lietz, a senior lecturer at Harvard Business School said of WeWork’s IPO:

“Their whole approach is at best sloppy, because a lot of the important numbers don’t tick and tie, and at worst it could be obfuscation. I prefer to think it’s just sloppy.”

The company’s bizarre IPO prospectus wasn’t even taken seriously by the company’s own employees, according to the WSJ:

Numerous current and former We employees believe the IPO prospectus was poorly written and delivered a muddled message about their business. They cite the document’s dedication, “to the energy of we—greater than any one of us but inside each of us.”

The IPO failed to mention the company’s $60 million private jet (which is now being sold) and numerous other simple questions that should be part and parcel with any comprehensive public company disclosure:

The document leaves unanswered some basic questions about the company’s finances. For example: How many new workstations did We deliver in the first half of this year? The prospectus filed in August said 273,000. Barely a month later, an amended version said 106,000. What was the total gross cost? In August, We said $1.3 billion. In September: $800 million. The reason for the dramatic changes is that the first version was wrong, people familiar with the matter said.

And should WeWork ever try to IPO again, it could wind up being even more difficult. Erik Gerding, a law professor at the University of Colorado said: “WeWork would be under a microscope with regulators in its next IPO go-round.”

In addition to WeWork’s IPO woes, its founder has stepped down and the company could run out of cash as early as next spring.

Landlords can’t help but notice this uncertainty: deals for two offices in London leased mostly to WeWork are in jeopardy and the company has pulled out of an agreement to rent space in Dublin. Landlords in New York and London are both bracing for “any drop in demand”.

While landlords scramble to cover their asses, the company’s competitors view WeWork’s implosion as a great time to “grab market share”.

Meanwhile, Ryan Simonetti, CEO of New York-based Convene, which specializes in flexible meeting, events and office space said: “WeWork was a competitor vying for space in Nashville, San Francisco, London and Boston but since filing their S-1, they’re no longer in the mix. This has created a tremendous opportunity for us to tell our story and show not just existing landlord partners, but potential ones, how different our model is.”

Laura Kozelouzek, CEO of Quest Workspaces, said: “I see this as a much-needed return to pragmatism for the industry. It’s going to be a rough ride for a number of owners and landlords as WeWork pulls back, but there will be some great opportunities as well.”

His company has switched to management agreements with landlords instead of outright leases.

Simonetti continued: “We’re seeing landlords that are more committed to thinking about a partnership format instead of signing a new lease. The noise is forcing landlords to ask real questions, including ‘How profitable are you at a unit-level?’”

WeWork’s new CEOs are doing damage control, working to try and assure clients that this is just a “bump in the road”. And it’s again going back to its aggressive marketing roots. For example, Ed Schaepman, CEO of Tribes, said some of his prospective clients are being offered steep discounts by WeWork. Some prices offered have come in at just 30% of Tribes’ price points.

Schaepman turned down WeWork as an investor in 2016.

Eugene Lee, chief investment officer and global head of real estate at Knotel, said: “They’ve spent billions of dollars building out co-working facilities. The millions miles of glass partition that they used to be proud of, is now just something they have to deal with and you can’t make those partitions disappear.”