House Speaker Nancy Pelosi (D-CA) is in a tough spot. After caving in to pressure from her party to launch an impeachment inquiry based on a CIA ‘whistleblower’ report that Trump abused his office to pressure Ukraine into investigating 2020 rival Joe Biden, Pelosi must now decide on whether to proceed with a formal vote amid mounting evidence that Trump did nothing wrong. 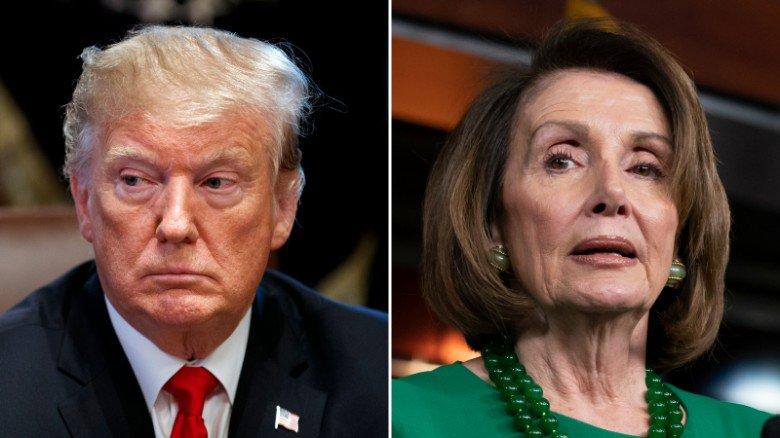 Trump has pushed for a vote – which would allow Republicans to issue subpoenas, as well as grant the White House the ability to cross-examine witnesses. To that end, the White House outlined in a Tuesday letter that they will refuse to cooperate with an inquiry that is “invalid” due to Pelosi’s refusal to make it official.

“Never before in our history has the House of Representatives — under the control of either political party — taken the American people down the dangerous path you seem determined to pursue,” wrote White House counsel Pat Cipollone.

Think about if you went through a trial, but you weren’t allowed to call any witnesses. That’s what Speaker Pelosi is doing to President Trump right now.

This entire process is a sham. pic.twitter.com/MNlc3H4zOQ

When asked on Wednesday if he would cooperate with Pelosi’s impeachment inquiry, Trump told reporters “we would if they give us our rights, it depends.”

Pelosi, meanwhile, says the effort to force a vote is nothing more than a “Republican talking point.”

“If we want to do it, we’ll do it. If we don’t, we don’t. But we’re certainly not going to do it because of the president,” said Pelosi in an interview last week with the Atlanta Journal-Constitution.

A decision whether to call the president’s bluff is likely to be a main topic when Pelosi convenes a conference call with House Democrats at the end of the week. Representative Dan Kildee of Michigan, one of the leadership’s vote counters, said Democrats could easily pass a resolution authorizing the impeachment inquiry with as many as 230 votes.

With the White House vowing to block any cooperation, Pelosi is scheduled to hold the conference call on Friday to chart the next steps. The committees conducting the investigation have already issued a salvo of subpoenas for testimony or records directed at administration officials such as Secretary of State Michael Pompeo as well as Trump’s personal lawyer Rudy Giuliani. –Bloomberg

“We continue investigating and digging to uncover more of the truth. Nothing has changed,” said Pelosi spokeswoman Ashley Etienne on Wednesday, adding that Democrats have yet to settle on legal or tactical responses to the White House letter.

House Republicans led by Minority Leader Kevin McCarthy of California have been “using ads, press releases and other efforts to hammer Democratic House members from GOP-leaning districts over impeachment,” according to Bloomberg.

Trump and Republicans also have complained about the fairness of the process, citing closed-door hearings, and what they say are limitations by committee Republicans to subpoena their own rebuttal witnesses, or for the White House to have legal counsel in the room during depositions. –Bloomberg

According to Rep. Jim Jordan (R-OH): “If Democrats were interested in fairness, they would follow the same process as previous impeachment proceedings. Instead, they just make up the rules as they go along.”

The House impeachment inquiry was launched after a CIA officer reported that President Trump pressured Ukrainian President Volodomyr Zelensky to investigate Joe Biden and his son Hunter for alleged corruption.

After Democrats uncritically launched their impeachment inquiry based on the initial whistleblower report, the White House upset their strategy – releasing a transcript of the call between Zelensky and Trump and the whistleblower complaint itself – plain readings of which reveal that Trump did not threaten, pressure or suggest a quid pro quo in exchange for a Biden investigation. Furthermore, Zelensky himself has said as much.

So as the case against Trump continues to unravel, Pelosi and the Democrats have some tough decisions to make as we head into the 2020 election.