Ukrainian President Volodymyr Zelensky says his country will “happily” investigate whether Ukraine interfered in the 2016 US elections – telling reporters on Thursday that “we can’t say yes or no” without first looking into the matter.

Zelensky said that it was in Ukraine’s best interest to determine what happened, according to the Associated Press.

During a July 25 phone call, President Trump asked Zelensky to look into various accusations of Democrat malfeasance in Ukraine, which Trump’s political enemies have seized upon as the foundation of an informal impeachment inquiry against Trump.

Last month, a CIA whistleblower claimed Trump abused his office by pressuring Zelensky to initiate probes into former Vice President Joe Biden and the election interference claims – suggesting that valuable US assistance was used as leverage.

On Thursday, however, Zelensky insisted that there was “no blackmail,” telling reporters from AP that he learned that the US had paused nearly $400 million in military aid after the July 25 phone call.

Trump asked Zelenskiy during the call to investigate Democratic rival Joe Biden, and Congressional Democrats believe Trump was holding up the aid to use as leverage to pressure Ukraine.

Zelenskiy said he thought the call would lead to an in-person meeting with Trump and wanted the American leader to come to Ukraine. –AP via WaPo

In an appearance on Fox News in early October, Trump attorney Rudy Giuliani said: “What I’m talking about, this, it’s Ukrainian collusion, which was large, significant, and proven with Hillary Clinton, with the Democratic National Committee, a woman named Chalupa, with the ambassador, with an FBI agent who’s now been hired by George Soros who was funding a lot of it.”

Rudy Giuliani: “What I’m talking about, this, it’s Ukrainian collusion, which was large, significant, and proven with Hillary Clinton, with the DNC, a woman named Chalupa, with the ambassador, with an FBI agent who’s now been hired by George Soros who was funding a lot of it” pic.twitter.com/nNFyXnHA7r

According to The Hill, Ukrainian Ambassador Valeriy Chaly confirmed that DNC contractor of Ukrainian heritage, Alexandra Chalupa, approached Ukraine seeking information on Trump campaign chairman Paul Manafort’s dealings inside the country, in the hopes of exposing them to Congress.

Chaly says that, at the time of the contacts in 2016, the embassy knew Chalupa primarily as a Ukrainian-American activist and learned only later of her ties to the DNC. He says the embassy considered her requests an inappropriate solicitation of interference in the U.S. election.

“The Embassy got to know Ms. Chalupa because of her engagement with Ukrainian and other diasporas in Washington D.C., and not in her DNC capacity. We’ve learned about her DNC involvement later,” Chaly said in a statement issued by his embassy. “We were surprised to see Alexandra’s interest in Mr. Paul Manafort’s case. It was her own cause. The Embassy representatives unambiguously refused to get involved in any way, as we were convinced that this is a strictly U.S. domestic matter.

“All ideas floated by Alexandra were related to approaching a Member of Congress with a purpose to initiate hearings on Paul Manafort or letting an investigative journalist ask President Poroshenko a question about Mr. Manafort during his public talk in Washington, D.C.,” the ambassador explained. –The Hill

Chalupa, who told Politico in 2017 that she had “developed a network of sources in Kiev and Washington, including investigative journalists, government officials and private intelligence operatives,” said she “occasionally shared her findings with officials from the DNC and Clinton’s campaign.“

Giuliani also said that former Ukrainian prosecutor Viktor Shokin, Biden had fired, “dropped the case on George Soros’ company called AntAC,” adding “AntAC is the company where there’s documentary evidence that they were producing false information about Trump, about Biden. Fusion GPS was there,” Giuliani added. “Go back and listen to Nellie Ohr’s testimony. Nellie Ohr says that there was a lot of contract between Democrats and the Ukraine. (via the Daily Wire).

Meanwhile, Ukrainians donated the most cash of any country to the Clinton Foundation between 1999 – 2014, followed closely by Brits and Saudis. 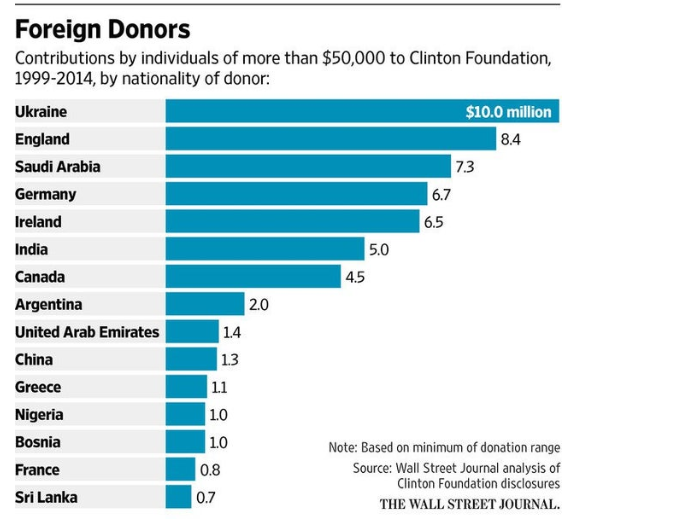 If Hillary does run again in 2020, her Ukraine ties may be her downfall.