update: It’s official, after what appears a major deal between the Kurdish-led SDF and Damascus was struck in the wake of a US exit from the region:

“Syrian military forces will be deployed on the border with Turkey by tomorrow morning in certain areas,” reports Danny Makki, a well-known war correspondent in Damascus.

#Update: Also another video of this Syrian Arab Army #SAA convoy advancing near into #Manbij with tanks also spotted in this convoy to help #SDF and #YPG forces drive the Turkish aggression out of #Syria. #Turkey pic.twitter.com/71CXAzZY2O

Erdogan has reportedly vowed that pro-Turkish forces will continue their advance despite the Syrian Army apparently coming to the defense of besieged Kurdish forces.

What we know so far about Syrian army deployment in N. #Syria so far#Manbej #Kobani#Shiekhmaqsoud
All to be entered this evening #Qamishly #Hasakeh

Reports of gradual control within 48 hours

It’s as yet unclear what the Russian military’s role in supporting its Syrian ally will be; however, we could be witnessing the beginnings of Putin’s ‘deal of the century’ unfolding, as we explained previously.

Putin is capitalizing on the chaotic retreat of the US & Turkey’s brutality toward the Kurds in order to assert Russia’s leadership. He contrasts how Russia has stood beside its beleaguered ally, Syria, while the US has abandoned both its allies, the Kurds and the Turks. https://t.co/NjBYZzwKCG

A huge development after earlier in the day Sunday Defense Secretary Mark Esper announced Trump has ordered a “deliberate withdrawal” of 1,000 US troops in northeast Syria amid the advancing Turkish incursion: sources close to the Syrian government have announced  the Syrian Army will move in to assist Kurdish militias in Kobani and Manbij.

This after shocking statements over the weekend by the head of the US-backed Syrian Democratic Forces (SDF), Mazlum Abdi, who told CNN, “I’ve been holding myself for two days from going to the press and saying that America abandoned us and that I would like you to get out of our areas now so that I can invite Russian and [Syrian] regime planes to take over this airspace.”

Reuters now reports on the significant development which could see the Turkish and Syrian armies enter into direct confrontation: “The Lebanese broadcaster al-Mayadeen said on Sunday the Syrian army would deploy within 48 hours to the town of Kobani which is held by the Kurdish-led Syrian Democratic Forces and the nearby town of Manbij which is controlled by SDF-aligned forces.”

“The Syrian Governmental Forces (SAA) are preparing to enter the region of Kobani today, based on an agreement with the Syrian Democratic Forces,” Syrian official Mohammed Shaheen, was cited as saying.

As early as last week the SDF was reportedly engaged in intensifying talks with Damascus over assistance from the Syrian Army, after the US withdrew its air support for the Kurdish-led group amid the Turkish assault.

On Monday the commander of the US trained and armed SDF, Mazlum Abdi, indicated just that in a bombshell statement: “We are considering a partnership with Syrian President Bashar al-Assad, with the aim of fighting Turkish forces.” 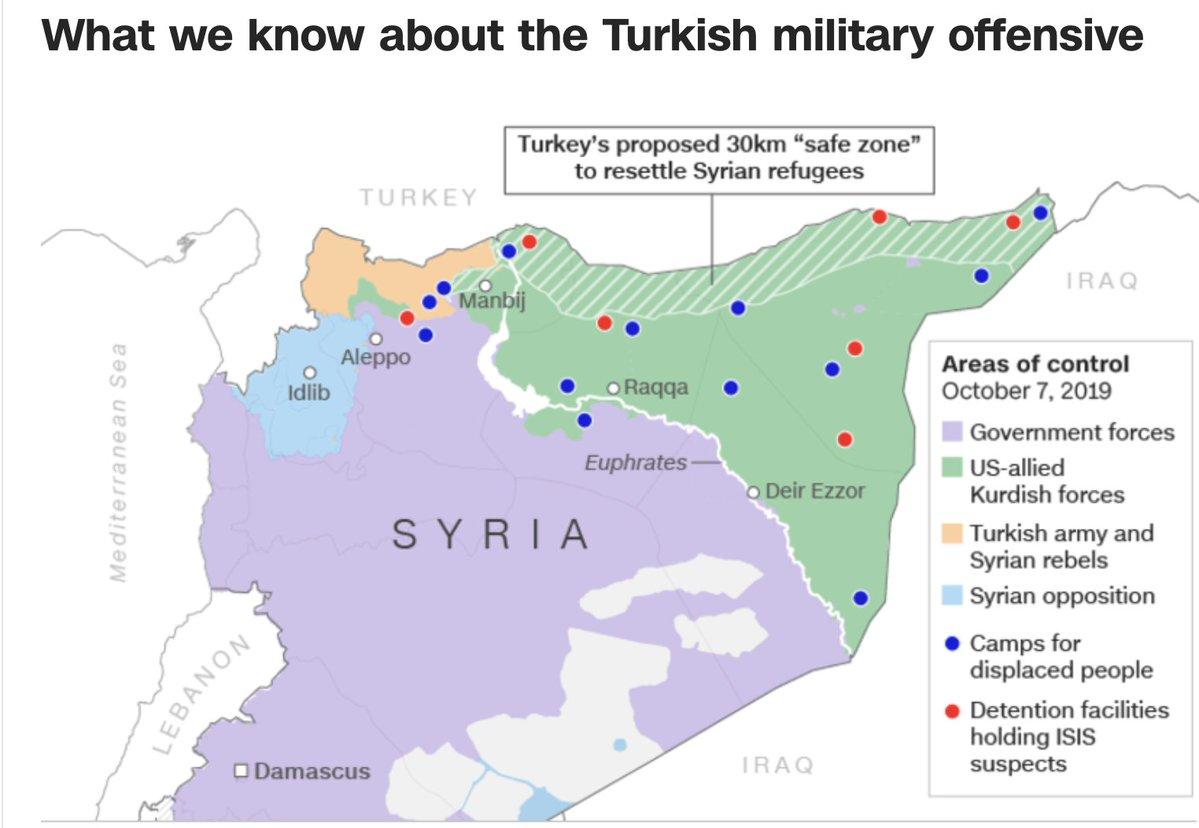 Though Damascus has yet to confirm an official deal with YPG/SDF forces, state-run SANA did say on Sunday that national forces were moving north to “confront” Turkish forces and its “aggression”.

Military analysis site, The Defense Post, reports on the potential direct cooperation between the Syrian Army and SDF to push out the Turks:

Kobani official General Ismet Sheikh Hasan said that Russian and Syrian government troops could enter Kobani and Manbij by Sunday night to help secure the cities from a Turkish incursion.

“We did everything we could,” he said. “We have called upon the West [and] the Arab Union but no one is coming to help, so we have no one other than ourselves to defend [Kobani]. Kurdish youth should come and defend their homes, and people should not abandon their homes – this is our land. It looks like this is the fate of the Kurds, to go through this each time.”

#BREAKING: Official statement of #Syria Arab Army: Soon, the #SAA will enter #Qamishli, #Manbij & other cities to prevent their fall into hands of #Turkish backed terrorists. They will also confront terrorists in Ras al-Ayn & Tal Abyad.#SAA defends the Kurds against #Erdogan pic.twitter.com/sPtQaJTLsa

Damascus officials had subsequently denied that it was engaged in a wide-ranging deal, however, Sunday’s reported development of Syrian Army forces to the north could be the beginning of a more significant deal in the words.

The United States has blocked such talks and cooperation for years, but the White House now appears ready to wash its hands of the matter.