One month ago, when the ECB’s Mario Draghi announced the return of “QEternity”, or open-ended bond purchases, as his parting gift (he leaves the ECB in just over two weeks) skeptics – such as this website – were quick to note that no such thing as open-ended QE can exist in a continent that is constrained by the amount of outstanding bonds that the ECB can monetize (and where Germany is coming up with such ridiculous fiscal acrobatics as “fighting climate change” to get the public to agree to issue more debt which the ECB could then monetize).

Specifically, as we noted in September, assuming the  proposed €20bn/month in QE, and assuming a split of €5bn in corporate bonds and the balance in sovereign, QE can run for roughly 9 months under current limits when it comes to the most “limiting” European asset: German bunds. 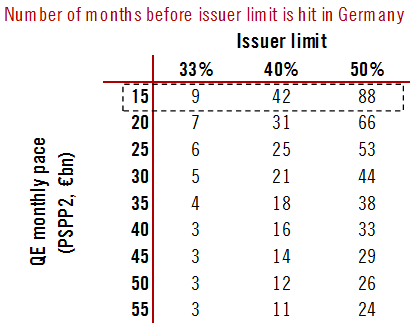 Now, about 4 weeks after we first warned, Reuters is out with its own analysis, cautioning that the ECB can buy just over one year’s worth of German bonds under its new asset-purchase program and will have to bend its own rules to keep the scheme running longer, “risking fresh internal and legal conflict.”

As extensively reported, the ECB decided last month to restart buying debt indefinitely, less than a year after it ended its last QE operation, in the process opening a rift in a normally collegial Governing Council, where most of the “core” central bankers rebelled against the outgoing Italian despot, as conservative policymakers felt they had been strong-armed into a scheme that will be difficult impossible to manage and exit.

Opponents of the ECB’s new round of bond purchases — which included Europe’s biggest and wealthiest countries, France, Germany, and the Netherlands — argued that the purchases should have been an emergency tool, and that indefinite buying will conflict with the safeguards the ECB set up to keep it legal. It would also deplete what little ammo the ECB had in case a real crisis hit as rates in Europe are already deeply negative.

Meanwhile, under existing ECB safeguards the central bank’s own hands will soon be tied how much debt it can buy should the economy fail to rebound. Those safeguards include buying no more one third of each country’s debt and buying bonds according to each country’s shareholding in the ECB, commonly known as the capital key.

And here, Reuters confirms what we wrote last month, calculating that if both rules are strictly followed, just over one year’s worth of eligible German bonds are left on the market. A similar calculation by Jefferies, found that at a €3.7BN in monthly Bund purchases, would mean the ECB runs out of eligible German bonds to buy in 11 months (and Dutch bonds in 6 months), assuming the 33% issuer limit remains intact. 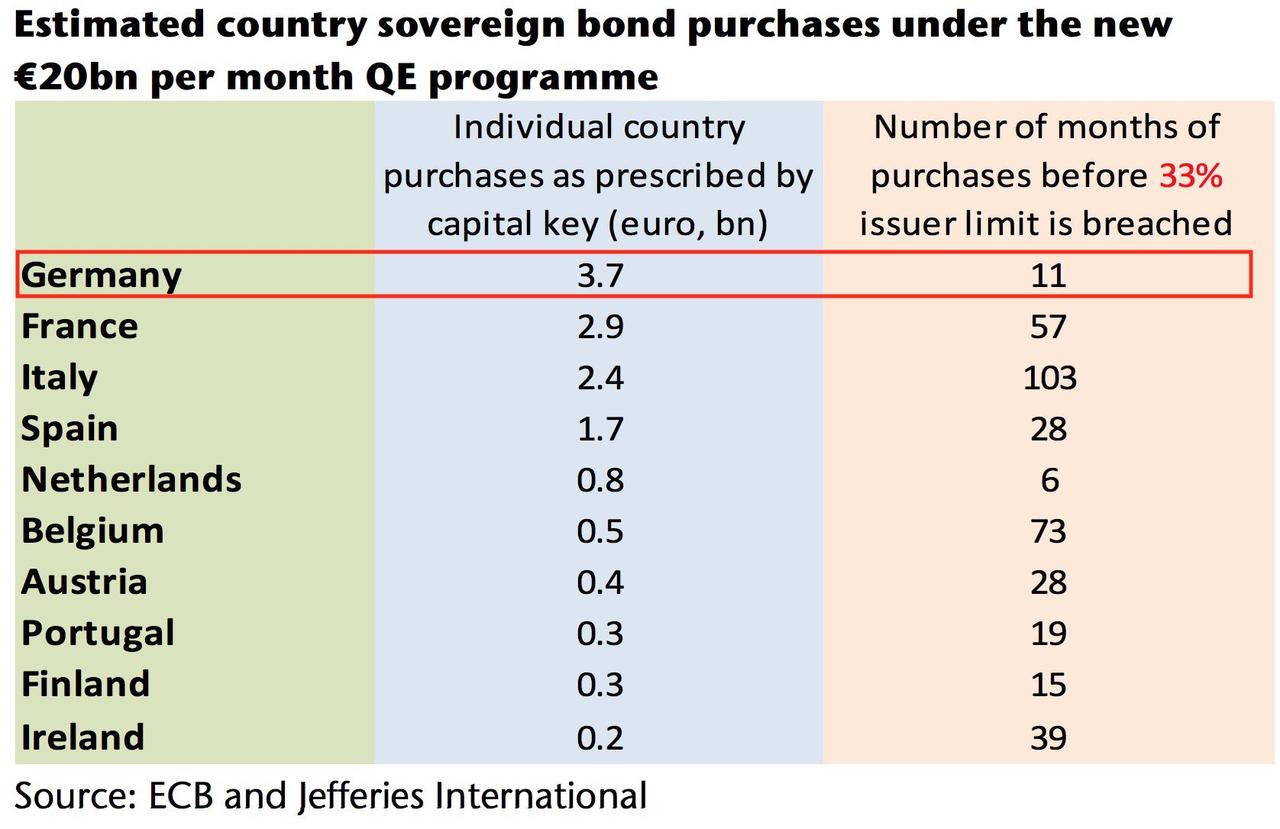 That will force the ECB’s new president, Christine Lagarde, who left her current organization crippled by the ongoing bailout of Argentina where the IMF has sunk a record $50+ billion, to solve a virtually impossible problem created by her predecessor (some have speculated that the criminally indicted former IMF head was picked specifically so she can be the fall guy, or rather fall gal).

To delay hitting this wall, policymakers would prefer “bending” the capital key and buying fewer German bonds rather than changing the issuer limit, two Reuters sources said, although it was unclear who else in Europe can issue enough bonds to offset the shrinking German supply.
The ECB has already deviated from the capital key in the past. By sticking to this practice, the ECB could buy German bonds “beyond a year,” a fifth source, familiar the ECB’s decision-making, said.

Deviating from the capital key – something the ECB has frequently done in the past – does not have direct legal implications, so it would be easier to defend in a court of law, where the program has already been challenged by a group of German academics. But it could be politically risky, since it would put Germany, the biggest opponent of the program, at a disadvantage. On the other hand, Bunds are already trading at near record negative yields so would anyone even notice?

Still, it would take time for any divergence to become significant, and the ECB can argue that past purchases also deviated as the bank sucked up extra debt in Italy, Spain and France to make up for countries where it could not buy.

The ECB’s holdings of Italian, Spanish and French debt are currently 8.4%, 7.4% and 3.9% above their quotas, according to Reuters calculations, which exclude Greece because it is not eligible for purchases. The problem is that the share of German debt is already 1.3% percent behind the capital key, an argument for some that the ECB is bankrolling profligate countries at the expense of virtuous Germany. Indeed, as the table below shows, the ECB has been overbuying French, Italian and Spanish debt at the expense of German, Dutch, Portuguese and Slovak debt: 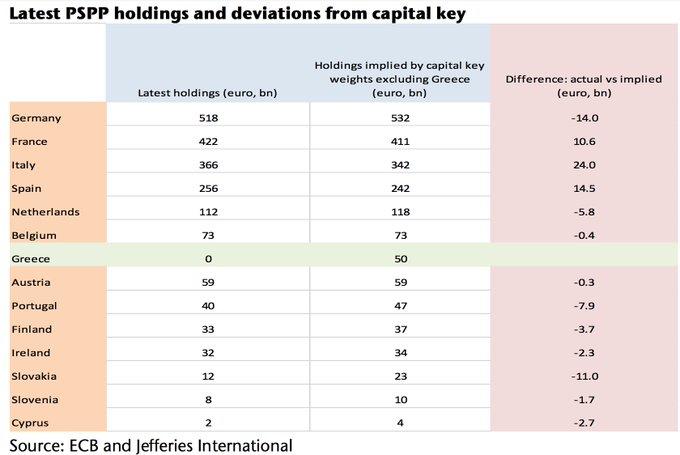 But as Reuters notes, the capital key is supposed to apply to the stock of government bonds, now totaling 2.1 trillion euros on the ECB’s balance sheet. So it will take time for the new government bond purchases, which are likely to be in the region of 15 billion euros a month if history is anything to go by, to affect the total in a material way.

Meanwhile, even though the European Court of Justice has already cleared the bond purchases, dismissing a challenge by the German academics, it said that safeguards, such as the ECB’s self-imposed rules, are necessary to ensure the bank does not finance governments, a major taboo under European law.

As such, changing the issuer limit further could fuel a fresh legal challenge, and the ECB’s legal committee has already highlighted this risk, the Financial Times reported earlier. German complainants, headed by the Berlin professor Markus Kerber, have indicated that the new bond purchase change the nature of the program, so courts should have a fresh look.

One other possible option is for the ECB to buy more private-sector debt to rely less on government bonds, although Reuters sources there was little appetite for this.

As a reminder, two years ago the ECB was badly burnt on the bonds it purchased by scandal-hit South African retailer Steinhoff in earlier purchases. Separately, many in the Governing Council argue that a bigger presence in the private-sector market would unduly lower risk perception.

Still, any method to prolong German purchases only buys the ECB a limited amount of time before the issuer limit is reached.

The bottom line is that the ECB’s new incoming head, Christine Lagarde will have just months to solve this problem. The good news is that Lagarde, assuming she keeps her job, will never have to worry about hiking rates. The market does not expect that to happen until 2025 at the very earliest… if ever.