Ahead of today’s barrage of bank earnings reports, there was some concerns that between tumbling 10Y yields and a sharp drop in trading this quarter, the two main sources of bank income would be clogged and financial stocks would disappoint. And while that may yet happen, the first company to report, JPMorgan, is higher in the premarket after beating on both the top and bottom line. 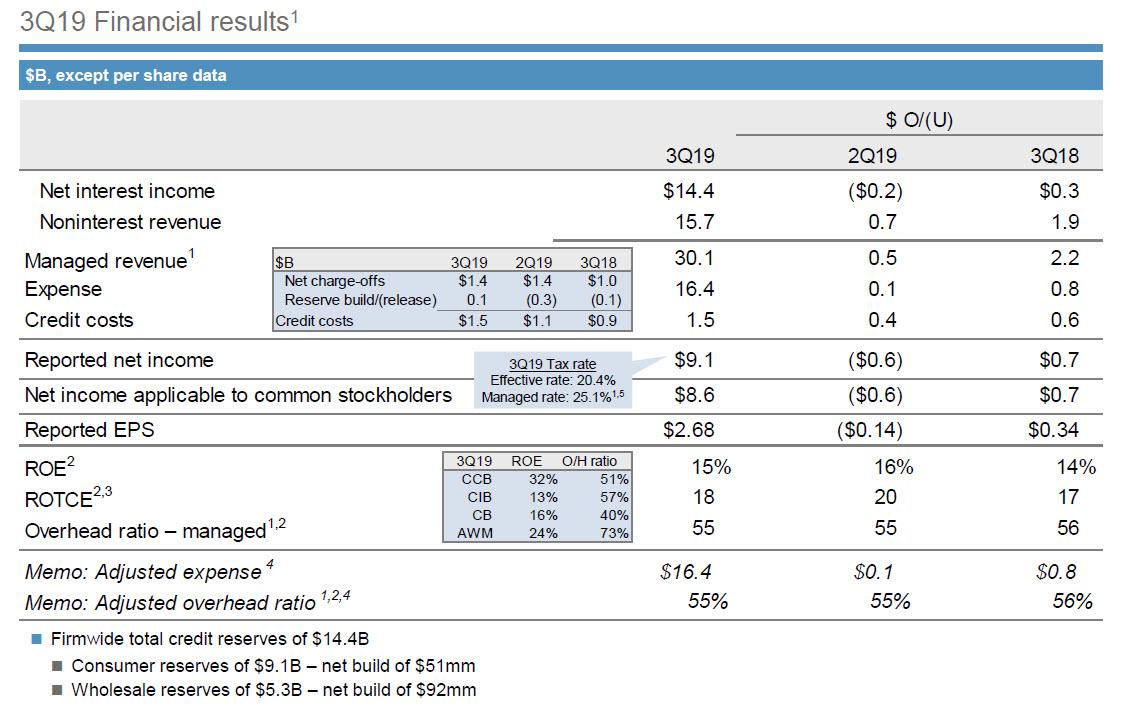 JPM’s closely watched net interest income – a key variable in a time of inverted yield curves – managed to rise 2.3% to $14.23BN from $14.17BN, coming above the highest analyst estimate of $14.20BN. According to Bloomberg, net interest income was up 2% from a year ago, thanks to growing balance sheet and changing mix of assets as declining interest rates bring down margins. As expected, NII growth has collapsed this year for all banks as the Federal Reserve started cutting interest rates. The Q3 net yield on interest-earning assets was 2.41% vs. 2.51% y/y and down feom 2.49% in the prior quarter, in line with the 2.41% estimate.

Not surprisingly, Jamie Dimon mentioned the rate environment in his quote: “JPMorgan Chase delivered record revenue this quarter, demonstrating broad-based strength and the resilience of our business model despite a more challenging interest rate backdrop.”

Yet against this “challenging interest rate backdrop,” Dimon noted the bank’s “consumer lending businesses benefited from our continued investments and a favorable environment for borrowers, which helped drive healthy volumes in Home Lending and Auto and strong loan growth in Card.” Dimon also cited record investment banking fees, and said JPMorgan had “share gains across products and regions.”

Meanwhile, after several quarters of cost-cutting, JPM reported that its total expense rose by $800MM Y/Y to $16.4BN as the period of shrinking for the largest US bank appears to be over.

Next, focusing on JPM’s Corporate and Investment Bank, it is here that the bank surprise with an impressive FICC revenue print, which rose a whopping 25% Y/Y to $3.56BN, up $713MM compared to the year ago quarter “which reflected less favorable market conditions.” 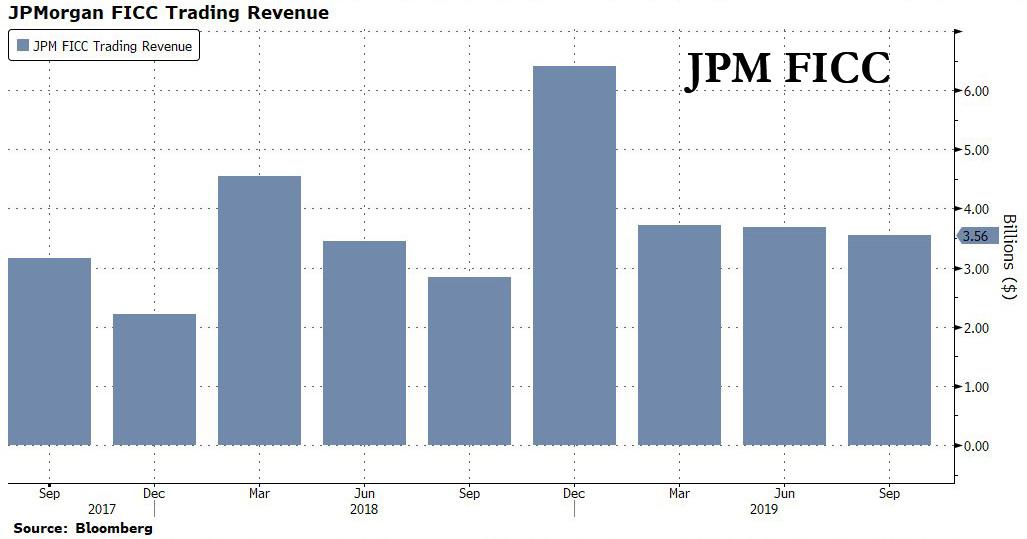 At the same time, JPM reported Equity Markets revenue of $1.52BN, missing expectations of $1.66BN and down 5% compared to a strong prior year, “reflecting lower revenues in derivatives, partially offset by higher Cash Equities.” 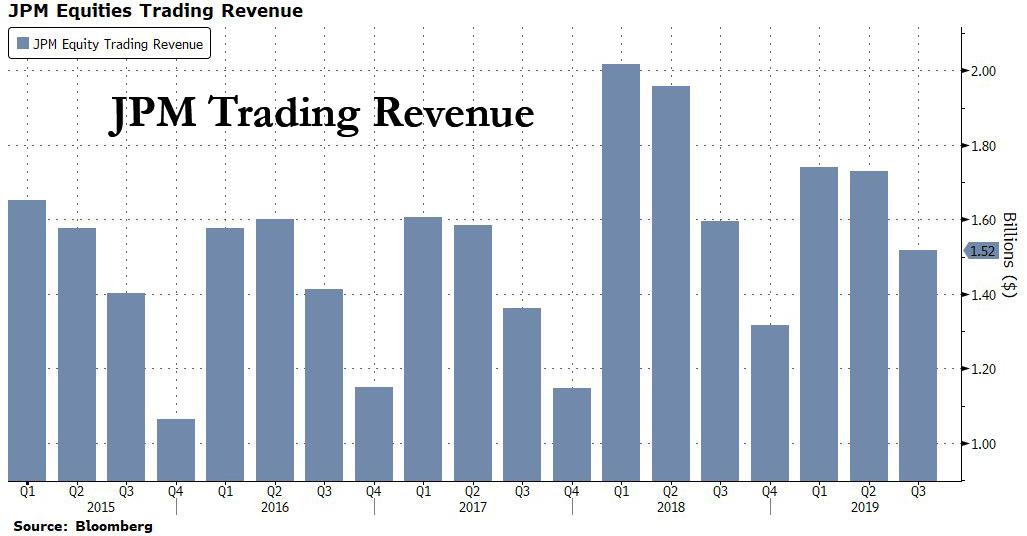 As Bloomberg puts it, while in the first half of the year, equities were doing better for most big banks and fixed income was lagging, volatility in the past quarter seems to have helped FICC revenue, while depressing equity trading.

Investment Banking also beat, rising 8% to $1.87BN from $1.80BN a year ago, mostly from higher debt and equity underwriting fees. Still, JPM faced lower advisory fees, which was expected in light of the sharp drop in M&A in the quarter. 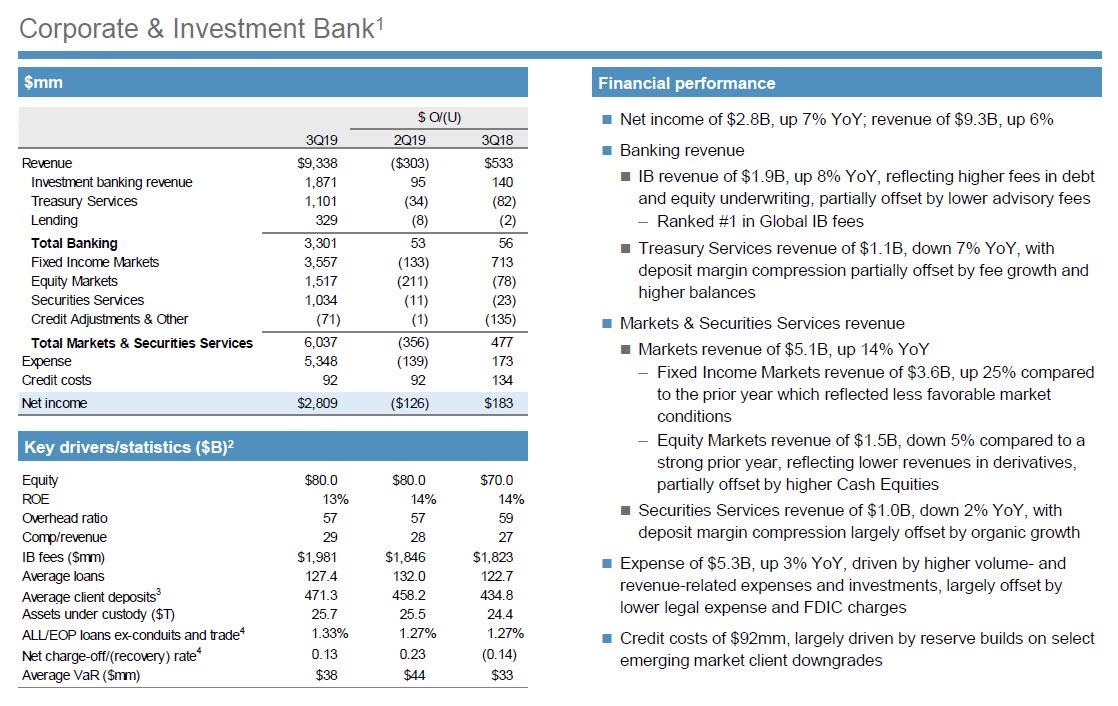 So a somewhat mixed picture: fixed income up 25%, but equity trading down 5%, which prompted JPMorgan to flag the point that Jamie Dimon brought up in September, namely the prior-year quarter was fairly weak, so the comparison for fixed income makes this quarter’s look a bit stronger than normal.

Offsetting the higher revenue was a 3% increase in expenses, which rose to $5.3B, up 3% YoY, driven by higher volume- and revenue-related expenses and investments, largely offset by lower legal expense and FDIC charges.

Finally, there was an interesting bullet on the IB page with JPM noting that credit costs of $92mm, were “largely driven by reserve builds on select emerging market client downgrades.” One wonders what exactly JPM means by this.

Looking ahead, JPM made the following forecasts:

“In the U.S. economy, GDP growth has slowed slightly. The consumer remains healthy with growth in wages and spending, combined with strong balance sheets and low unemployment levels. This is being offset by weakening business sentiment and capital expenditures mostly driven by increasingly complex geopolitical risks, including tensions in global trade. Regardless of the operating environment, JPMorgan Chase will continue to serve our customers, clients and communities globally, while investing in innovation, talent, technology, security and controls.”

Validating Dimon’s gloomy call on the economy, JPM’s provisions in the consumer and community banking businesses climbed 34%. Within the card business, net charge-offs were higher but the bank says that was in line with expectations and partially due to a reserve build as “newer vintages season.” It will be curious what JPM says on this topic even though Dimon said the consumer “remains healthy.”

One final note: there was no mention of WeWork in JPMorgan’s press release or presentation. Overnight, WeWork was said to have preferred JPMorgan over Softbank for its financing package.

Following the strong FICC and IB beat, the stock jumped as much as 2% premarket, rising to $119 a share, just over a dollar away from the all time high of $120.40.