Bottom line: the ongoing repo market pressure – which indicated that one or more banks were severely liquidity constrained – was supposed to be a non-event.

Alas, as of this morning when the Fed’s latest repo operation was once again oversubscribed, it appears that the repo turmoil is not only not going away, but is in fact (to paraphrase Joe Biden) getting worse, because even with both term and overnight repos in play and with the market now expecting the Fed to start injecting copious liquidity tomorrow with the first Bill POMO, banks are still cash starved. 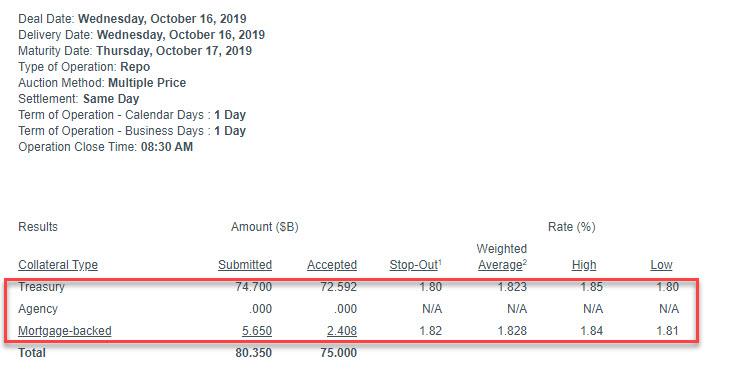 While it was clear that the repo market was tightening in the past week, with each incremental overnight repo operation rising, today was the first oversubscribed repo operation since September 25, and follows yesterday’s $67.6BN repo and $20.1BN term repo.

But the clearest sign that the repo market is freezing up again came from the overnight general collateral rate itself, which after posting in the 1.80%-1.90% range for much of the past two weeks, spiked as high as 2.275% overnight and was last seen at 2.15%, well above the fed funds upper range…

… while today’s Effective Fed Funds rate also jumped from a “normal” level of 1.82% to 1.90%, the clearest indication yet that despite the bevy of actions undertaken by the Fed to unclog the repo market in the past month, it has so far failed even if it managed to quietly implement QE4 under the guise of “fixing” the repo market… something it has clearly failed to do.