California Is (Again) Teetering On The Edge Of Financial Ruin

California Is (Again) Teetering On The Edge Of Financial Ruin

For years, it had been speculated that California’s state-wide model of heavy regulation, expensive education, high taxes and bloated spending would eventually drive the state into financial ruin, according to a new Bloomberg Opinion piece. Over the last 15 years, the state also has had to deal with widespread blackouts and an unemployment rate that ballooned to 12% after the financial crisis.

After deficits exploded under Governor Schwarzenegger, the state eventually got back on track. Under Governor Jerry Brown, the state raised taxes again (surprise) and bumped up its sales tax. These tax hikes, combined with a recovery in housing and in the stock market, helped swing the state’s budget back into the black.

But now, the symptoms of larger problems in California are bubbling to the surface yet again. For instance, the recent “planned blackouts” by power provider PG&E to try and prevent wildfires are indicative of a crumbling energy infrastructure across the state.

Losses from recent wildfires in California have been “staggering”, totaling upwards of $400 billion in 2018. This figure represents about 1/7th of the state’s total GDP and is comprised of health costs, lost property, lost jobs and asset prices falling. It also takes into account migration out of the state.

PG&E has said that the “safety” blackouts will continue, which means that the state isn’t going to have reliable year-round electricity. This will inevitably take its toll on property values and slow migration inflows into the state. 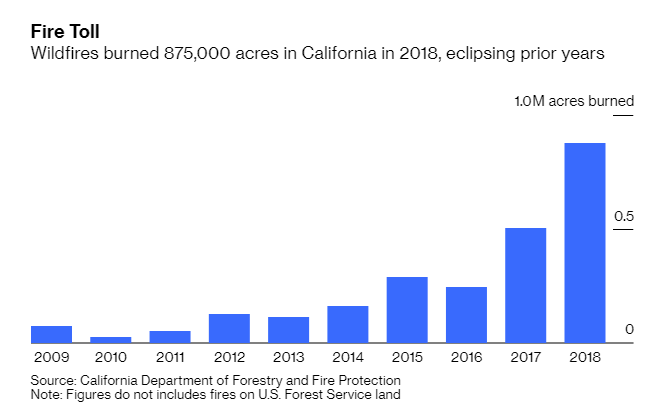 While wildfires rage across the state, another issue is plaguing California: homelessness. The state’s homeless population has increased by 5.3% from 2010 to 2018. California is already home to almost half of the country’s homeless. We have documented, at length, the homelessness issues in areas like San Francisco, where the epidemic is reaching a fever pitch.

At the same time, government pension costs are rising across the state; faster in California than in the rest of the nation. The cost saving measures being put in place to offset this problem are degrading the state’s education system.

And so, the inevitable has happened: people are leaving the state. 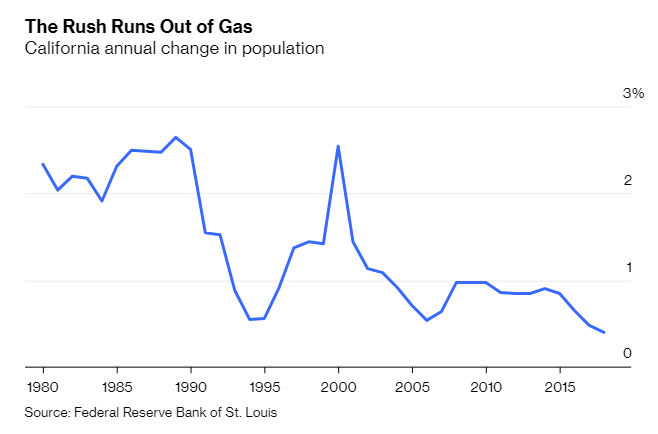 In fact, a recent paper by economists Joshua Rauh and Ryan Shyu found that out-migration of top-bracket taxpayers accelerated after the state’s 2012 income tax hike.

“Among top-bracket California taxpayers, outward migration and behavioral responses by stayers together eroded 45.2% of the windfall tax revenues from the reform,” the paper’s abstract says.

With Democrats back in the saddle, holding a supermajority in the state, California seems doomed to repeat its dysfunctional history from the early 2000’s. Making matters worse, an initiative called Proposition 13 is making it difficult for California to alleviate its burdens by raising property taxes, the op-ed notes:

But California’s political system is making it hard to respond to these pressures. Thanks to a 1978 ballot initiative called Proposition 13, California cities have stringent limits on raising revenue from local property taxes. That forces the state to provide many services, financing them with hefty income taxes. Those are inherently more unreliable than property taxes, since wealthy taxpayers can move away (while property can’t move), and since California’s income taxes fluctuate a lot because they depend so much on the profits residents earn on volatile stock prices.

“Proposition 13 must be repealed, and property taxes raised,” the piece continues, in order for the state to avoid what it calls another “dark path”. It also suggests that the state legislature pass bills to allow greater housing density and more construction throughout the state.

Only time will tell whether these proposed solutions, if implemented, would even work. But one thing is for sure: if California doesn’t do something soon, the state could become (further) living proof that creating a liberal utopia by hiking taxes and adding regulation is nothing more than a pipe dream, if not a full blown recipe for exactly how to drive an economy into the ground.