Back on September 8, just hours before September’s notorious “quant crash” that sent “momentum” and “growth” stocks tumbling and “value” and “most-shorted” names surging… 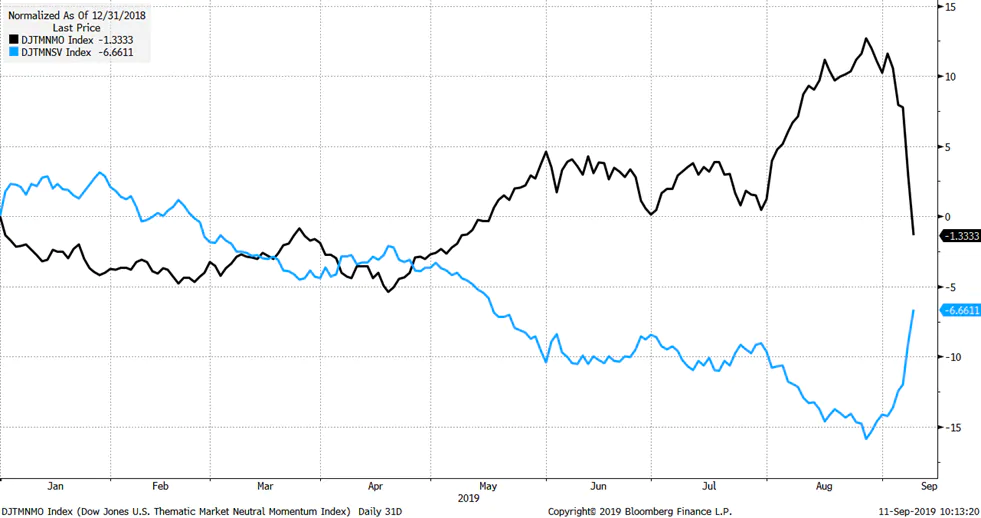 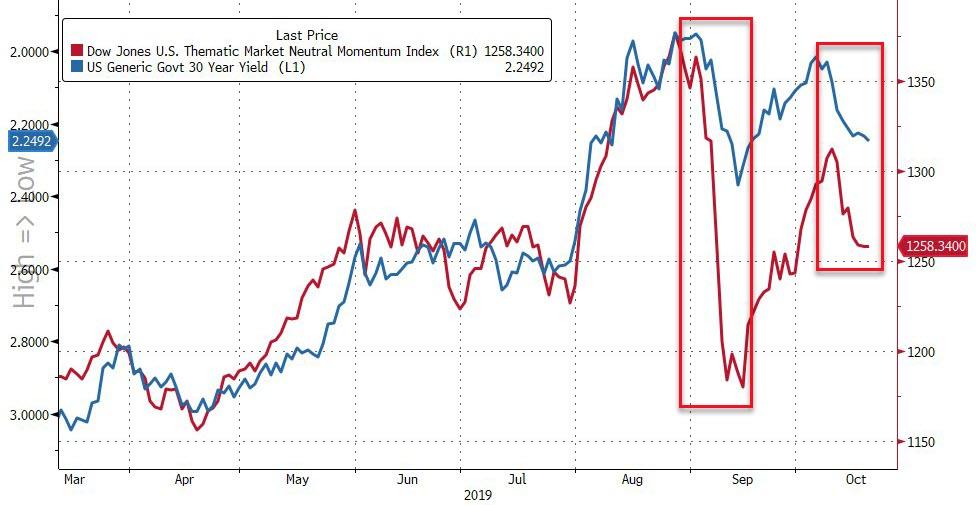 … and which also crippled Long/Short hedge funds who had ridden the growth vs momentum divergence to unprecedented extremes only to suffer in the fallout of the trade’s reversal, sending Goldman’s Hedge Fund VIP basket tumbling as stock with a high hedge fund ownership concentration hit a 1+ year low… 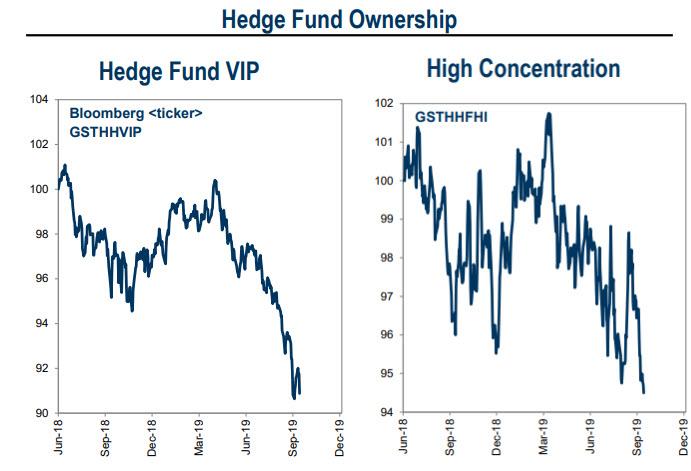 … Morgan Stanley made an prescient warning, one which we discussed in “Morgan Stanley Spots A Major Challenge Facing Today’s Market: What If Things Get Better?”  As the bank’s cross-asset strategist Andrew Sheets wrote that “this week’s rally shined a light on the market’s bull case, and the importance of a better economy to that story. Given our cautious views on growth, trade progress and central bank action relative to consensus, we maintain our cautious stance. But this week was a shot across the bow: if we’re wrong and growth is set to reaccelerate, the market isn’t positioned for it. The moves could be large.“

Well, as Goldman writes on Friday, after being mostly negative YTD, macro surprises have turned positive for the first time since April 2019, if only marginally, as Goldman’s “global CAI Innovations index” has turned sharply higher in recent weeks, even if it remains negative. 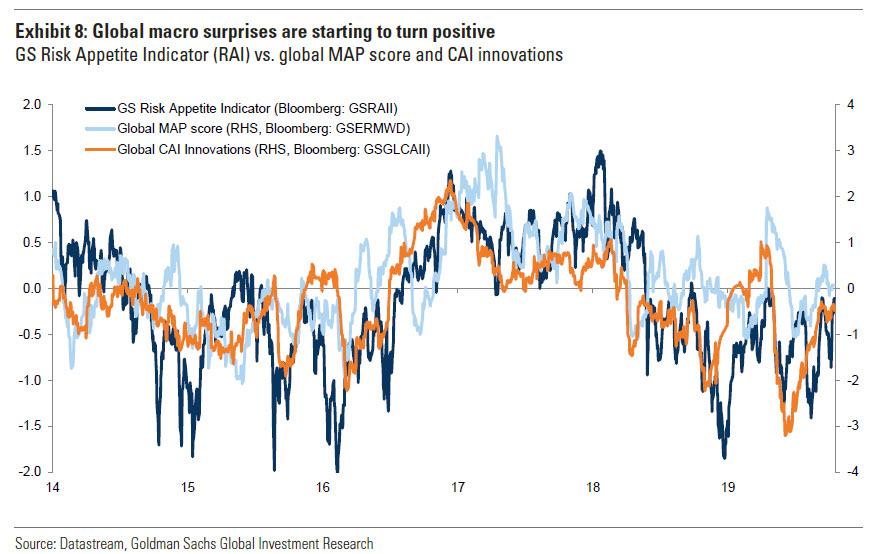 A less subjective interpretation of incoming data, if one coming sentiment surveys, confirms that an inflection point was recently reached, as the global manufacturing depression appears to be finally bottoming out; to wit, after the longest slowdown in global manufacturing PMIs on record, PMI prints have finally posted an increase in the last 2 months. 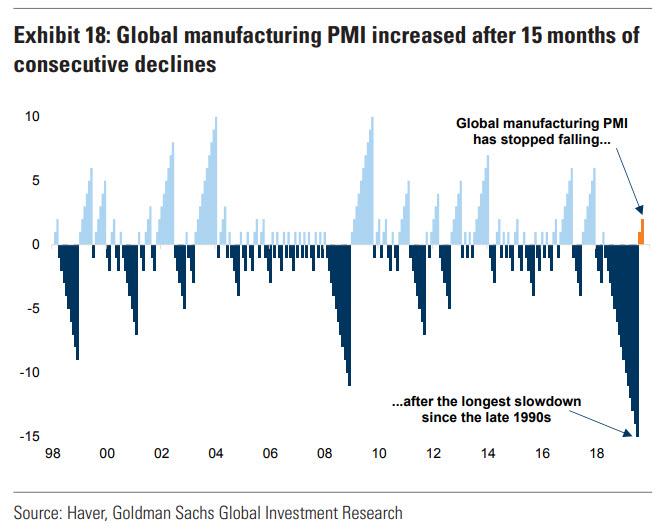 Of course, with some $15 trillion in debt still trading at negative yields and traders still predominantly positioned for continued downside in yields, what the above observations of a potential inflection point to global growth – and inflation – imply, is that yields could go sharply higher from here as a waterfall liquidation, coupled with the occasional VaR shock, results in a furious selloff in duration as inflation expectations reprice higher.

This, as Morgan Stanley first hinted over a month ago, and as the quant crash from mid-September showed vividly, is a major problem, because as Goldman’s Christian Mueller-Glissman explains, “a sustained increase in real yields due to better growth could also drive a violent procyclical rotation across and within assets, similar to 2H 2016. This could hit a lot of the popular rotation trades YTD as the combination of structural and cyclical growth concerns and lower real yields has led to concentrated positioning.”

To dramatically underscore this point, the Goldman strategist also brings attention to the “sharp (albeit temporary) rotation in September”, which served as a “preview” of what is to come should growth return to the global economy. More importantly, as the chart below – which plots the 3-month correlation of popular rotation trades with real yields – shows,  the extreme negative correlation, or “asymmetry” between real yields and “consensus trades”  has never been greater! 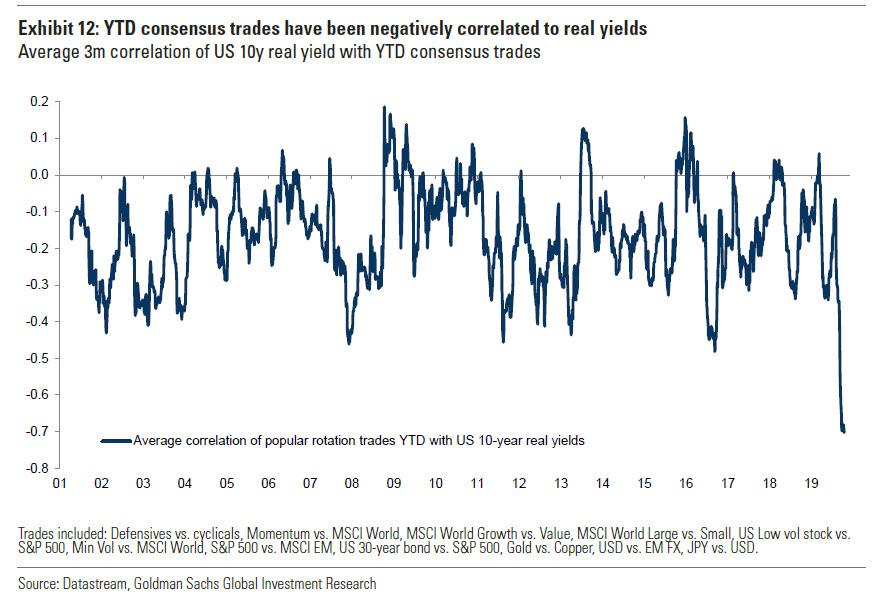 In other words, whereas the S&P500 is up roughly 20% YTD, not only are most traders lagging – as we showed recently in our latest hedge fund performance report – the broadest benchmark, but they all appear to be pursuing the same consensus trades.

Intuitively this makes sense: after all, the worse the news, the most likely central banks are to engage in further easing and unroll even more accommodative policies. And sure enough, as Goldman notes, support from monetary policy is already fading:

Initially this came alongside a sharp steepening of US yield curves and an increase in US 10-year TIPS yields – a reversal of the ‘risk off’ move in August – as PC1 ‘ Global growth’ recovered at the same time. But since October PC2 has declined further, even as PC1 fell sharply at the beginning of the month.

In short, as Goldman concludes, in the near-term it seems increasingly difficult for G3 central banks to surprise in a dovish direction without weaker growth first. 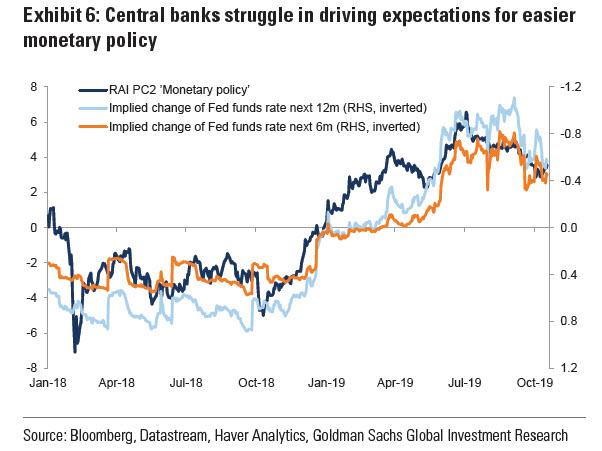 What the above means, said simply, is that the biggest risk traders face, is not some geopolitical shock, Impeachment inquiry, trade war, or economic slowdown, but – paradoxically – the threat that things are getting better again. Or as Morgan Stanley warned more than a month ago, “if growth is set to reaccelerate, the market isn’t positioned for it. The moves could be large.”

Ok… so if growth is the biggest risk then the playbook is simple: hope for even more bad news, and more easy policies. Simple, right?

Well, not quite, because as Goldman admits, whereas “good news” is the biggest near-term risk to consensus trades, more bad news could end up being just as bad. Or, as Glissman writes, “until a meaningful growth pick-up comes, markets remain vulnerable to negative shocks, and as a result the range could get ‘fatter.’ With the fading search for yield, the correlation of the VIX with US 10-year TIPS yields has turned sharply negative. 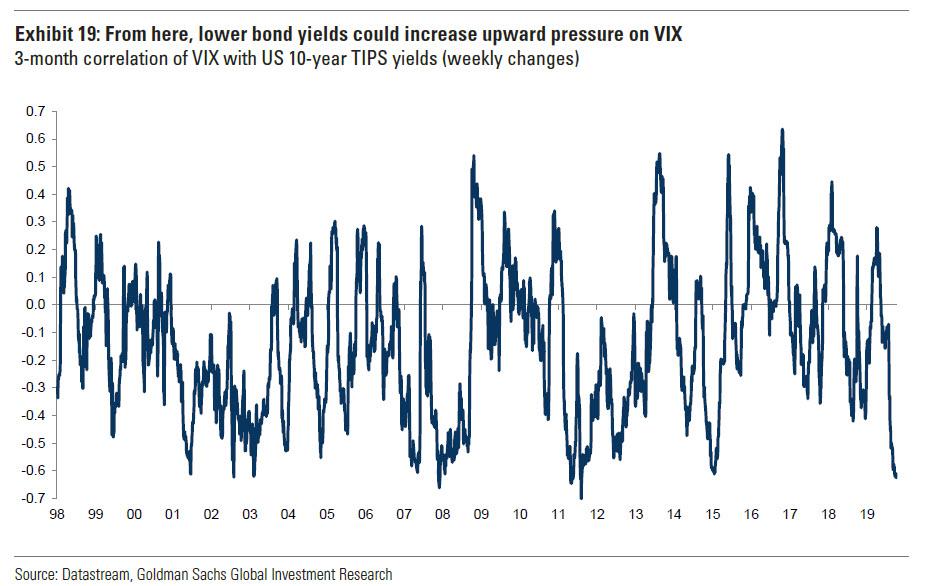 Intuitively, this too makes sense, as lower real yields from here “could signal increased recession risks, e.g., a spillover from weak global manufacturing to services and the labor markets, and thus higher risk premia across assets would outweigh lower discount rates.”

Of course, since there is now at least one generation of traders who has never appreciated that bad economic news actually means bad news for stocks, Goldman points out that – at least in theory, and in a world where central banks don’t manipulate all signals – “S&P 500 volatility tends to increase with weaker US growth” yet since this is anything but a normal world, as Goldman’s US Current Activity Indicator has declined YTD, the VIX has barely budged. 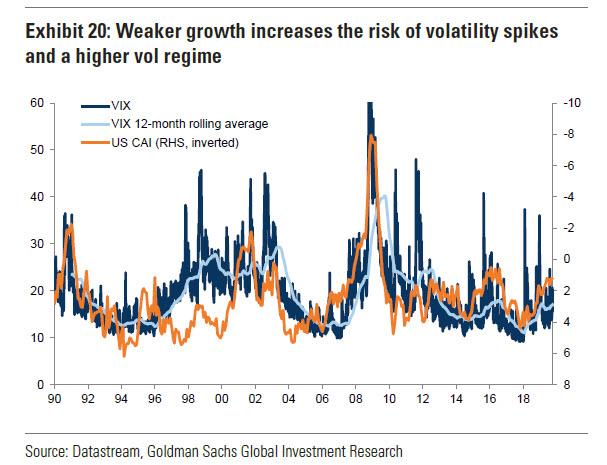 This will change, because as Glissman writes next, “shocks from policy, politics and geopolitics could quickly drive more volatility: there is a growing gap between the VIX and global/US economic policy uncertainty indices given increased concerns around geopolitical developments in the Middle East and Hong Kong, as well as domestic politics in the US.” 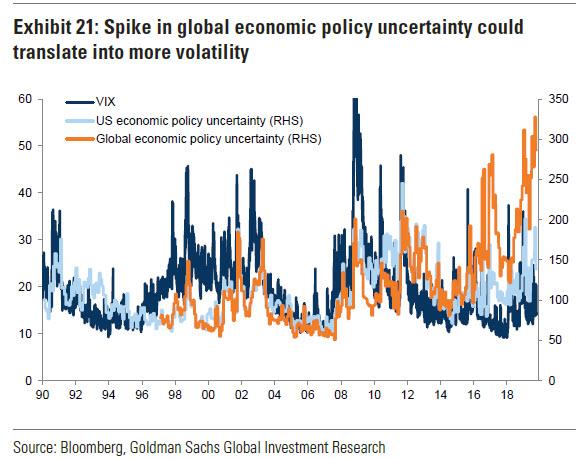 In other words, after years in which both good and bad news was interpreted as good news for stocks by traders, we are now entering a rather unpleasant phase for market, one where any “good news” could spark an unprecedented collapse in consensus trades, wiping out years of gains, on one hand and where continued economic slowdown could in turn spark a VIX shockwave, similar to the one seen just as the tech bubble burst and global financial crisis erupted.

In short, after years in which every idiot trader made money regardless of how they were positioned, mean reversion is finally coming… and it will be a bitch.