“I Stand Against Everything She Represents” – Gabbard Hammers Tired, Sick, Fragile Hillary

“I Stand Against Everything She Represents” – Gabbard Hammers Tired, Sick, Fragile Hillary

Tulsi Gabbard has stones. She has the kind of stones born of a life dedicated to the cause of serving others.

She is the direct opposite of Hillary Clinton, for whom all causes serve herself and her enormous narcissism and pathology.

So seeing Gabbard go directly after Hillary Clinton after her debate performance the other evening where she explicitly called out both the New York Times and CNN (the hosts of the debate) for the hit jobs on her puts to rest any idea she’s someone else’s stalking horse.

Two weeks ago I asked if five tweets from President Trump changed U.S. foreign policy for good, Gabbard does him two better with these three tweets of absolute, Oscar Wilde-like beauty.

Great! Thank you @HillaryClinton. You, the queen of warmongers, embodiment of corruption, and personification of the rot that has sickened the Democratic Party for so long, have finally come out from behind the curtain. From the day I announced my candidacy, there has been a …

… concerted campaign to destroy my reputation. We wondered who was behind it and why. Now we know — it was always you, through your proxies and …

… powerful allies in the corporate media and war machine, afraid of the threat I pose.

It’s now clear that this primary is between you and me. Don’t cowardly hide behind your proxies. Join the race directly.

There is so much goodness to unpack in these tweets it is almost beyond my ability to do so.

Clearly, Gabbard may have real problems with Donald Trump as president but she’s learned very quickly from him that the best way to deal with Hillary and her media quislings is to attack them without mercy.

Gabbard throws down the gauntlet here outing Hillary as the mastermind behind the DNC strategy of allowing the current crop of future losers to fall all over themselves to alienate as many centrist voters as possible.

This paves the way for Hillary to swoop in on her broom, pointed hat in hand, and declare herself the savior of the Democratic Party’s chances to defeat Donald Trump next November.

Remember that leading up to the debate Gabbard was going to boycott the event because it was such a corrupted event and stage-managed to showcase the chosen ‘front-runners’ — Joe Biden and Elizabeth Warren.

It makes sense to me that she decided at the last minute to join the debate after the Times piece just to ensure she got the national platform to openly call out the corruption in the same breath as attacking Trump for his, to this point, disastrous foreign policy mistakes.

She emerged from that debate as the only candidate with any moral compass capable of pointing in a single direction. Warren made a fool of herself responding with bromides about leaving in the ‘rightt way’ indistinguishable from any other presidential puppet of the last twenty years.

This is two debates in a row where Gabbard came out blazing at the front-runner, claiming a moral and ethical high ground on foreign policy that, at just over half the age of her rivals, that shows a maturity well beyond her years.

Her calling Hillary the “Queen of Warmongers” is so self-evidently true that it will reverberate far beyond Twitter into votes.

And it tells Hillary that Gabbard has zero fear of her and her political machine.

You can’t cow a person without fear who has nothing to lose.

[ZH: And Gabbard was not done – she ripped into Hillary’s terrible legacy in a Friday night “Tucker Carlson Tonight” interview.]

During her discussion with Fox News host Tucker Carlson, Gabbard framed Clinton’s opposition as being not only against her candidacy, but against “every veteran in this country, every service member, every American, anyone watching at home fighting for peace and who was calling for an end to these regime change wars.”

“Ultimately she knows she can’t control me,” Gabbard said, responding to Carlson’s question about why Clinton is taking aim at her. “I stand against everything that she represents and if I’m elected president, if I’m the Democratic nominee and elected president she will not be able to control me. She won’t be able to manipulate me. She won’t be able to continue to work from behind the curtains, to continue these regime change wars that have been so costly.”

The Democratic presidential candidate said the blood of her “brothers and sisters in uniform” killed in Iraq, a “war she championed,” is “on her hands.”

“I am calling for an end to these regime change wars. This is why she’s speaking out strongly and smearing my character and trying to undermine my campaign,” she said.

“Just as she is doing this to me, this is what will happen to anybody who is doing the same.”

Responding to a question from the Fox News host about the massive media and political opposition from both parties to her foreign policy positions, Gabbard noted that it happened as soon as she announced her candidacy.

” And now we know exactly why. It’s because I am standing up and speaking out strongly against the Hillary Clinton legacy, the warmongering legacy of waging these regime change wars, continuing to escalate these tensions between the United States, nuclear armed countries like Russia, China, this nuclear arms race bringing more profits to the military-industrial complex. “

Bullies like Hillary never learn that lesson until they are humiliated beyond recognition.

Moreover, when you look at this sequence of events it’s clear that the DNC, Hillary and everyone else close to the corridors of power fear Gabbard’s rise. If they weren’t they wouldn’t be putting out smears in the New York Times.

They wouldn’t be spending millions on social media trolls to discredit her in the public fora.

The first rule of politics is “You never attack down.”

This was the exchange that ended Rudy’s political career. 150 seconds of truth-telling that ignited a movement which culminated in the election of Donald Trump.

Gabbard is following that same course. The difference between her and Dr. Paul is that she’s less polite. But as to their moral clarity there is little difference. And she shouldn’t be polite. The stakes are higher today than they were in 2008.

The people Gabbard is up against are even more ruthless since Hillary intends to win, whereas the Republicans in 2008 were fighting for the right to lose to her at the time.

Gabbard’s rise in popularity among Trump voters and centrists is born of the same exhaustion the American people have with endless wars for globalism. She is Trump’s Kryptonite.

The party she represents is irrelevant. By wrapping herself in the mantle of the front-runner for the nomination is not delusional, it’s the most strategic thing she’s done to date.

It’s also becoming more and more realistic as the days go on.

Because by responding to Hillary’s ham-fisted attempts to position herself as the voice of reason, Gabbard clarifies for everyone just how sick and bile-filled Hillary is by outing her as the delusional one.

And reminding everyone that Hillary is the architect of the very policies in the Middle East that Trump is now taking heat for trying to unwind.

Gabbard knows what the plan is. She was there in 2016 when Hillary stole the nomination from Bernie Sanders and quit her position in the DNC because of it.

Even Trump knows that foreign policy and foreign entanglements will be the big ticket issue for this election cycle.

Because Gabbard has single-handedly made it so.

Trump is already running against her by pulling back from Syria, looking for peace options in Afghanistan, firing John Bolton while using proxies and, yes, Vladimir Putin to assist him in fixing his myriad mistakes of the first thirty months of his presidency.

Hillary trying to position herself as the one who can save the Middle East from Trump’s bumbling is laughable and Gabbard just laughed in Hillary’s face.

Calling everyone who voices any dissent from foreign or domestic policy orthodoxy a Russian agent is a losing proposition. It belies reality and what people see with their own eyes.

Americans want better relations with Russia now World War III. Trump’s popularity has risen since he backed off on starting a war with Iran.

Democracy doesn’t matter, only the fever dreams of the soulless and the power mad who think they run the world. Look at what Hillary has become, not what you remember her to be.

She’s a tired, sick, fragile woman whose bitterness and evil is literally eating her up from the inside out. Have you noticed that she hasn’t been photographed standing up for months? 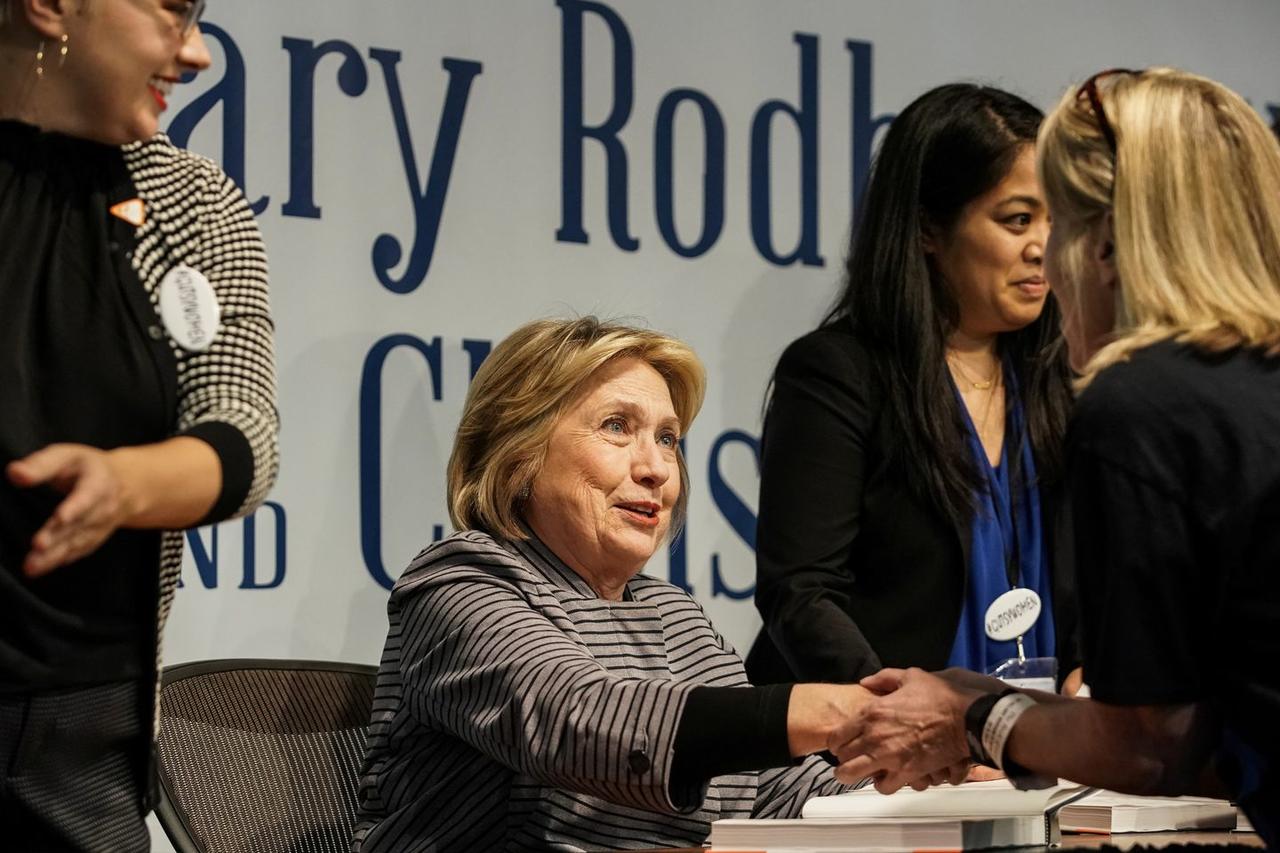 She’s the epitome of everything wrong with America and, in fact, the world and Tulsi Gabbard just stood up and laughed at her for still thinking she was the Emperor when in reality she’s The Joker.

Join my Patreon to assist me in helping you expose the frauds and liars whose perversions of truth threaten the fabric of civil society.  Install the Brave Browser to make it harder for them to track you and marginalize similar voices.