Low-income consumers are struggling to make ends meet despite the “greatest economy ever,” and if a recession strikes or the employment cycle continues to decelerate — this could mean the average American with insurmountable debts will likely fall behind on their debt servicing payments, according to a UBS report, first reported by Bloomberg.

UBS analyst Matthew Mish wrote in a recent report that 44% of consumers don’t make enough money to cover their expenses.

The new survey asked 2,100 respondents in the US about their current financial situation, at least 40% of the respondents said they experienced a credit problem, if that was a rejection of a credit card or a missing payment, or perhaps defaulting on a balance that was due, this was a 3 percentage-point increase from last year, the survey found.

Mish has written before that lower-income consumers have seen very little net worth improvement in the last decade. They’ve increased their debt burdens significantly through credit cards, auto loans, and student debt. 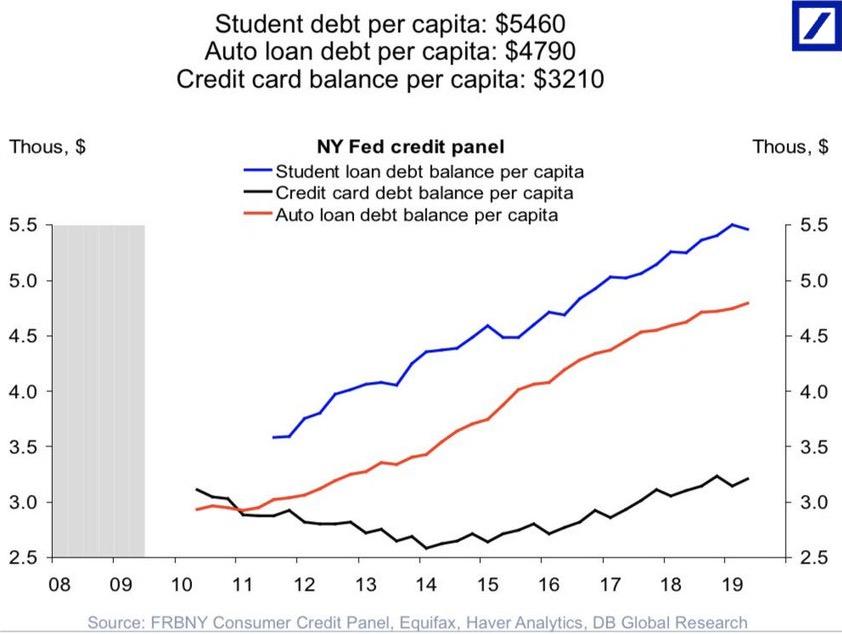 As the federal funds rate drops, consumers are being squeezed by record-high credit card rates.

Given the high leverage of lower-income consumers, the next cyclical downshift in the consumer credit cycle could be much worse than the Dot Com bust, Mish noted in July.

Mish writes in the current report that there are no signs, as of yet, of an imminent downturn in the consumer credit cycle.

The analyst wrote that the UBS indicator that determines if consumer credit is turning stood at .10 through late September. High scores of the index are often associated with deteriorating consumer health, in 2001 and 2007 recessions, the indicator was approximately .70.

Mish said in the last six months, only 17% of consumers reported an improvement in their financial well-being.

As we’ve noted in the last several months, successful transmission of weakness from a manufacturing recession has filtered into services and employment. This means that the economic slowdown in the US has already broadened, now affecting consumers, and will lead to waning consumer health in the late year — just in time for the holiday season.

As the US economy cycles lower through 4Q, lower-income consumers are already coming under pressure.

Already, the percentage of student loans that are 90 days or more delinquent has jumped from a year ago. Auto loan delinquencies remain elevated from last year.

And it’s when the consumer shifts into a holding pattern, pulling back on all spending, that is when the broader economic downswing will be seen. A reminder, consumers account for 70% of US GDP.