California Has Tried Warrenomics, It’s Been A Disaster…

California Has Tried Warrenomics, It’s Been A Disaster…

California is suffering a slow but steady decline.

Bad economic policy has made the Golden State less attractive for entrepreneurs, investors, and business owners. 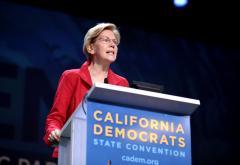 Punitive tax laws deserve much of the blame, particularly the 2012 decision to impose a top tax rate of 13.3 percent.

But now we have some scholarly evidence from two Stanford Professors. Here’s what they investigated.

In this paper we study the question of the elasticity of the tax base with respect to taxation using microdata from the California Franchise Tax Board on the universe of California taxpayers around the implementation of Proposition 30 in 2012. This ballot initiative increased marginal income tax rates… These increases came on top of the 9.3% rate that applied to income over $48,942 for singles and $97,884 for married couples, and also in addition to the 1% mental health tax that since 2004 had applied to incomes of over $1 million. The reform therefore brought the top marginal tax rate in California to 13.3% for incomes of over $1 million.

For those not familiar with economic jargon, “elasticity” is simply a term to describe how sensitive taxpayers are when there are changes in tax policy.

A high measure of elasticity means a large “deadweight loss” since taxpayers are choosing to earn and/or report less income.

And that’s what the two scholars discovered.

Some high-income taxpayers responded to the big tax increase by moving.

We first study the extensive margin response to taxation, and document a substantial one-time outflow of high-earning taxpayers from California in response to Proposition 30. Defining a departure as a taxpayer who went from resident to non-resident filing status, the rate of departures in 2013 over 2012 spiked from 1.5% after the 2011 tax year to 2.125% for those primary taxpayers earning over $5 million in 2012, with a similar effect among taxpayers earning $2-5 million in 2012.

By the way, you won’t be surprised to learn that California taxpayers increasingly opted to move to states with no income tax, such as Florida, Nevada, and Texas.

Other taxpayers stayed in California but they chose to earn and/or report less income.

We combine these results on the extensive margin behavioral response with conclusions of analysis of the intensive margin response to Proposition 30. …we use a differences-in-differences design in which we compare upper-income California resident taxpayers to a matched sample of non-resident California filers, for which there is relatively rich data… Our estimates show a substantial intensive margin response to Proposition 30, which appears in 2012 and persists… We find that California top-earners on average report $522,000 less in taxable income than their counterfactuals in 2012, $357,000 less in 2013, and $599,000 less in 2014; this is relative to a baseline mean income of $4.15 million amongst our defined group of California top-earners in 2011. …the estimates imply an elasticity of taxable income with respect to the marginal net of tax rate of 2.5-3.3.

In the world of public finance, that’s a very high measure of elasticity.

Wonky readers may be interested in these charts showing changes in income.

By the way, guess what happens when taxpayers move, or when they decide to earn less income?

The obvious answer is that politicians don’t collect as much revenue. Which is exactly what the study discovered.

A back of the envelope calculation based on our econometric estimates finds that the intensive and extensive margin responses to taxation combined to undo 45.2% of the revenue gains from taxation that otherwise would have accrued to California in the absence of behavioral responses. The intensive margin accounts for the majority of this effect, but the extensive margin comprises a non-trivial 9.5% of this total response.

We can call this the revenge of the Laffer Curve.

By the way, it’s quite likely that there has been a resurgence of both the “extensive” and “intensive” responses to California’s punitive tax regime because the 2017 tax reform restricted the deductibility of state and local taxes. This means that the federal government – for all intents and purposes – is no longer subsidizing California’s backwards fiscal system.