Could Trump’s Next Fed Chair Be A “Goldbug”?

Could Trump’s Next Fed Chair Be A “Goldbug”?

Authored by Tho Bishop via The Mises Institute,

This week, Donald Trump formally nominated Judy Shelton and Christopher Waller for vacant governorships on the Federal Reserve. Waller, the Vice President of the Richmond Fed, is widely viewed as a standard Fed nominee with the reputation of being a “dove” who has criticized recent interest rate hikes.

It is Judy Shelton who is particularly interesting. 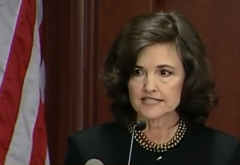 A former campaign adviser for Trump, Shelton has been a vocal Fed critic who has praised the gold standard in the past. While she has recently advocated for lower interest rates, she has also been a critic of the Fed’s policy of paying interest on excess reserves that has become a key policy tool since 2008. Shelton’s nomination is also interesting  due to her background standing in stark contrast to most of her colleagues.

As Joseph Salerno has noted:

The good news is that Ms. Shelton is not a technically trained academic economist, indoctrinated in the prevailing orthodoxy. She holds a doctorate in business administration from the University of Utah and has spent most of her career in the world of free-market policy think tanks, including stints at the Hoover Institute and the Atlas Network. She also writes refreshingly and articulately in favor of the gold standard, or some version of it.

The bad news is that she leans heavily toward supply-side economics, which is deeply flawed on monetary policy. Like most supply-siders, the position she advocates may be summed up in the motto, “I favor sound money—and plenty of it.”

Still, though by no means an Austrian, Shelton’s voice on the Fed would create some much needed ideological diversity to the central bank.

In reacting to an interview with Ms. Shelton last June, Jeff Deist wrote:

Her comments represent the most substantive attack on the Fed, and central banking generally, by any potential nominee to the Fed board in recent history. She not only challenges how Jerome Powell and Fed officials conduct monetary policy, but whether they can conduct it competently at all….

So Shelton doesn’t want to End the Fed. But in the parlance of woke America, she’s an “ally.” Recognizing the limits of central bank omniscience, and challenging its benevolence, are important first steps on the road to redeeming our money and our economy.

In fact, it was precisely these unorthodox views that make her nomination a less-than-sure thing, even with a Republican-controlled Congress.  As Bob Murphy has noted, her competency in financial history has made her the target of criticism from establishment powers on both left and right. Particularly of issue is comments made by Republican Senators, often offering criticism with intellectual depth on par with their colleague Ms. Ocasio-Cortez. For example, when asked about Shelton’s views on gold, Senator Richard Shelby, the Chairman of the Senate Banking Committee, could only offer:

The gold standard would probably shatter a lot of people’s dreams around the world right now…There was a reason to get off of it.

The fact that the administration insisted on nominating Shelton, in spite of the public concerns, demonstrates a certain level of confidence that her nomination will not be shot down.

What’s particularly interesting is that CNBC notes that there has been speculation that Shelton could be a potential for Jerome Powell if Trump is still in office at the end of the Fed chair’s term in 2022. If so, that would bring someone who the Wall Street Journal described as a “goldbug” to the office of America’s top central banker.

Of course, as Alan Greenspan’s tenure showed, that may not actually mean much.