“We Have Seen This Before”: One Bank Asks How Long Investors Will Ignore Record Valuations And Weak EPS

“We Have Seen This Before”: One Bank Asks How Long Investors Will Ignore Record Valuations And Weak EPS

As we showed yesterday, institutional, retail and systematic/algo investors have all thrown the last trace of caution to the wind and have gone even more “all-in” stocks, just as equity valuations hit never before seen levels…

… surpassing even the dot com bubble on an EV/EBITDA basis. 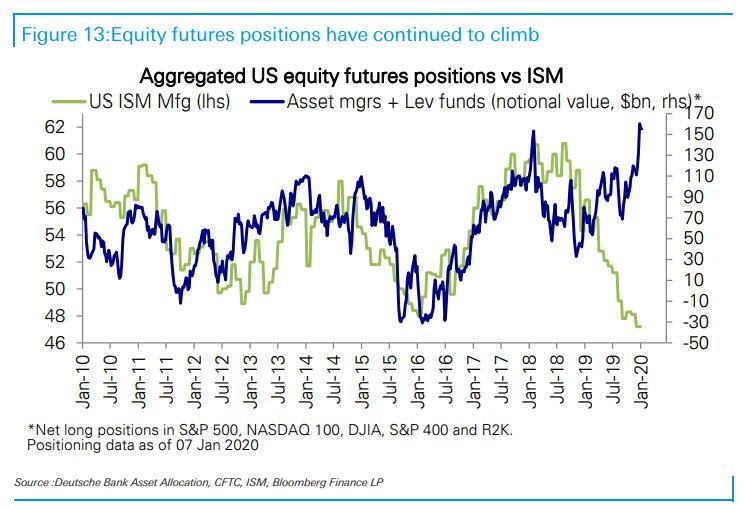 … and in fact, as JPMorgan noted over the weekend, the market’s returns have now overshot the “improvement” in data, what little of it there is, by the most on record – an “extraordinary” 20%. 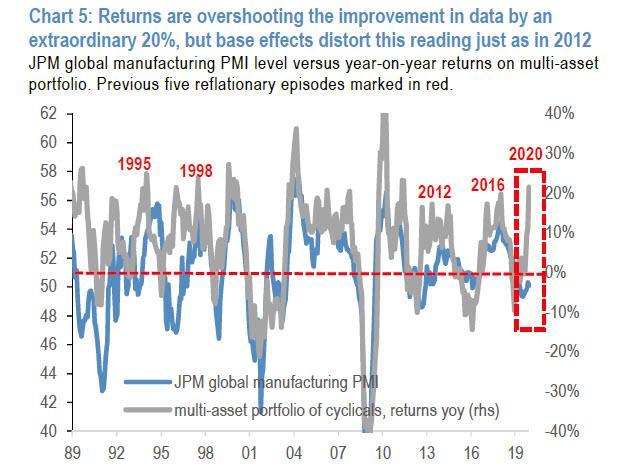 As the chart above shows, the market’s delirious meltup is taking place without any substantial improvement in either economic fundamentals or earnings, and in fact as SocGen calculates, since the beginning of last year, the average MSCI World stock gain is 26%, yet the average change in forward EPS expectations is just 1.5%! This means that the S&P’s 33% return since Jan 2019 is almost entirely a function of multiple expansion, i.e., central banks and stock buybacks.

That said, none of this should come as a surprise to regular readers and it certainly is not a surprise to SocGen’s Andrew Lapthorne who in a note asking “how long will investors be willing to ignore expensive [ZH: make it record] valuations and weak EPS“, notes that “we have seen this before.”

Echoing what Morgan Stanley wrote over the weekend, namely that the question for 2020 is whether fundamentals, both economic and EPS, can finally ramp up before the positive impact of central bank policy fades, Lapthorne writes that “during various central bank interventions post various financials crises, equities have rallied despite a lack of support from earnings.” So, although the share price rally in 2019 implies a need for rapid acceleration in profits this year, some market participants argue that “as long as central banks are printing money equities can keep rising”, which to be fair, has proved to be the right call more often than not.

However, as we have been pounding the table for the past few weeks, a key difference between ‘now’ and ‘then’ is  valuation. For example, in 2011 MSCI World was trading on a forward PE multiple of just under 11x, at the very bottom of it historical range; today Lapthorne calculates that MSCI World is on a forward PE of 17x, a 55% premium to 2011, and that is based on 9% EPS growth in 2020. 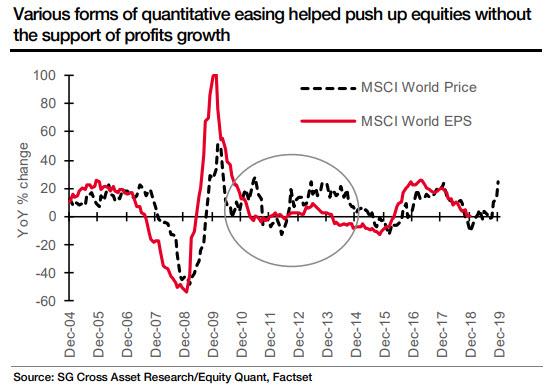 Which again brings up the key question: with record asset valuations constraining the upside, how long can investors ignore the hard reality and bet everything on an optimistic outcome? The answer may come as soon as the end of Q4 earnings season.

To be sure, many companies are expected to beat expectations “given that many have been working extremely hard in recent months to lower them” Lapthorne writes, adding that expected Q4 EPS numbers slumped at the end of last year and are almost 10% down from April levels. Still, he issues a warning, noting that “Q4 reporting is more extensive and the ability of companies to beat tends to be more limited than in the other quarters, and beyond beating EPS expectations the focus for us will be on profit margins, i.e., are costs continuing to rise faster than sales?” 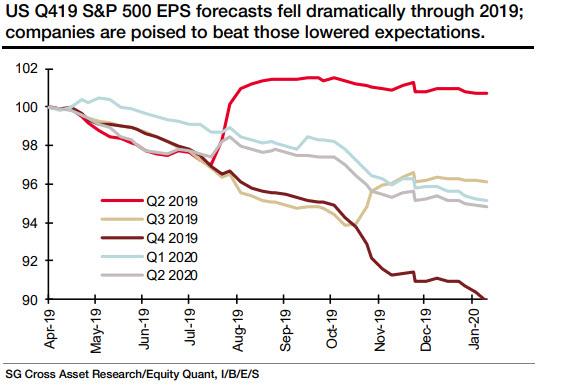 There is another difference from prior QE-inspired meltups: the outlook for ‘Low Vol’ stocks that include the likes of  expensive Consumer Staples stocks in Europe. According to the SocGen strategist, these were “must own” stocks during the QE years, performing strongly for the past few years and notably riding the 2016 slowdown almost intact. But in 2019 on the back of a volatile bond market, these stocks had their “Fed Tapering” moment, with strong relative gains quickly followed by strong relative losses, and performance has struggled ever since. This suggest that momentum has now shifted away from these “QE darlings”, leaving them on challenging valuation multiples and needing to meet elevated expectations.

And so, the $64 trillion question is absent a dramatic improvement in earnings here, and elsewhere, how long before this revulsion to a handful of QE beneficiaries finally spreads to the rest of the market. While nobody knows the answer, if Q4 earnings prove to be a disappointment and it becomes obvious that fundamentals can’t grow into the record valuations implied by all time high stock prices, watch out below.