For the first time in two years, President Trump traveled to Davos, Switzerland, where he once again confronted the global elites whom he railed against during the 2016 campaign by calmly rattling off his administration’s accomplishments.

Speaking from a prepared notes, Trump calmly repudiated the hysterical warnings of the ‘Green New Deal’-ers, decried impeachment as a “hoax” and recounted a list of his administration’s economic accomplishments, beginning with the fact that American unemployment has hit its lowest level in 50 years, while millions of manufacturing jobs have come back to the US. 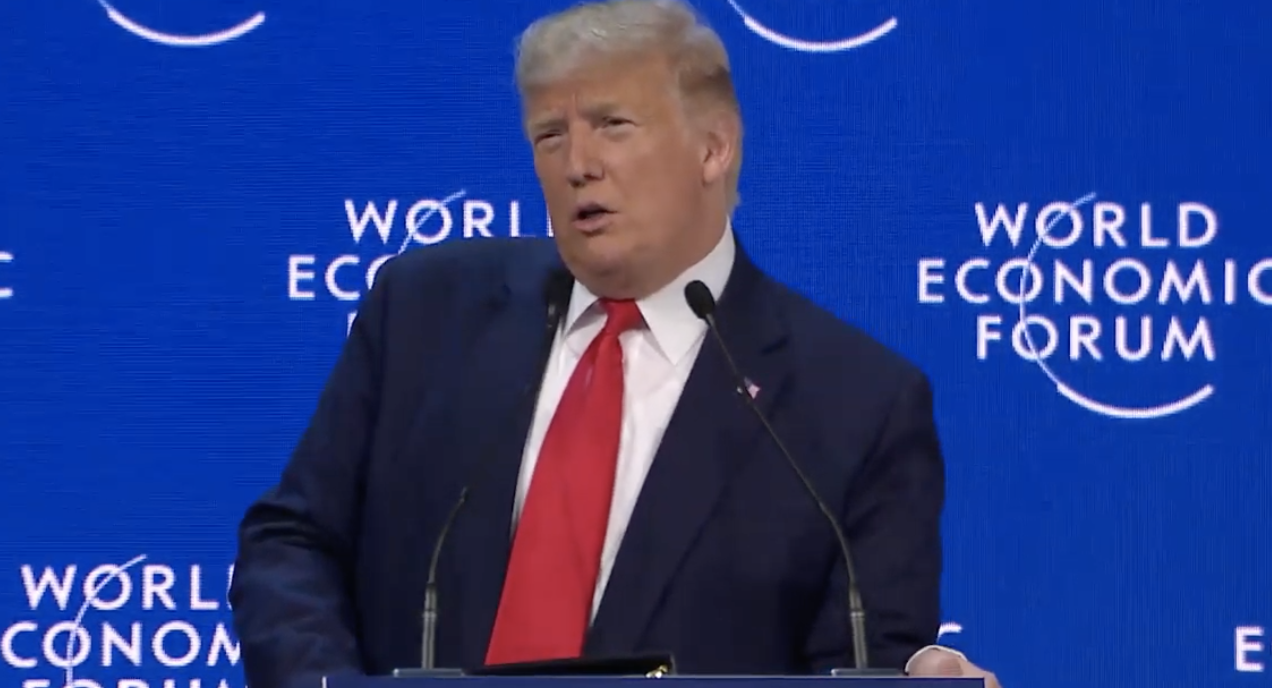 But instead of dwelling on impeachment, Trump chose to focus on America’s myriad economic achievements under his leadership.

Thanks to Trump’s pro-business economic stance, America’s economy is in the midst of an “economic boom the likes of which have never been seen before.” By unleashing ‘the potential of our people’ – via tax cuts and regulatory rollbacks at a “level that’s never been done before in the history of our country” – Trump said he managed to generate a “historic wave of investment, wage growth and job creation.”

During the speech’s opening lines, Trump touted the two trade agreements that were finalized last week (agreements that inspired US stocks to rocket to fresh all time highs, and the economic gains achieved by minorities under his leadership (even as Trump’s opponents continue to accuse him of white supremacy.

“We are lifting up Americans of every race color religion and creed. Unemployment rates for black Americans Hispanic Americans and Asian Americans have all reached record lows…and African-American poverty has plummeted to the lowest rate ever recorded.” Workers at the bottom of the income latter are enjoy some of the largest gains, Trump said, citing a recent uptick in wage growth.

The unemployment rate for women has reached its lowest level since 1953, and for the first time, they now comprise a majority of the workforce.

“Since my election, the net worth of the bottom half of wage earners has increased by +47%…real median household income is at the highest level ever recorded…the American dream is back bigger and better than every before. And no one is benefiting more than America’s middle class.”

In a very short period of time, some 12,000 new factories have been built across America, a great sign for manufacturing jobs, while the stock market (as Trump rarely forgets to remind us) has rallied by more than 50% since his election, which has bolstered pension funds and 401(k)s, essential tools for America’s aspiring retirees.

After finally nominated two new candidates to fill the vacancies on the Fed board, Trump kept up his criticism of Chairman Jay Powell, whom he blamed for “raising rates too quickly and cutting them too slowly.”

Despite the Fed’s mistakes, nobody can deny the prosperity that America has achieved over the last three years.

“America’s newfound prosperity is undeniable, unprecedented and unmatched anywhere in the world…America made this stunning turnaround not by making minor changes to a handful of policies but by adopting a whole new approach. Every decision we make…is focused on improving the lives of every day Americans. We are determined to create the highest standard of living that anyone can imagine.”

A pro worker, pro citizen, pro family agenda demonstrates how a nation can thrive when it’s communities, its companies and its people work together for the whole nation.”

“He’s for China I’m for the US but other than that we love each other.”

Moving on to the subject of America’s newfound energy independence, Trump bragged that the American energy revolution is saving the average American family more than $2,000 a year.

“Our European allies no longer have to be vulnerable to unfriendly energy suppliers either. We encourage our friends in Europe to use America’s vast supply, and achieve true energy security.”

As we anticipated last night, Trump directly confronted the climate alarmism of Greta Thunberg, AOC and their ‘Extinction Rebellion’ cohorts – the most prominent topic at an event where hundreds of attendees flew in on private jets and a gathering of wealthy protesters has prompted those attending the conference to beef up security.

Thunberg also spoke at Davos on Tuesday, and in keeping with her style of speaking to world leaders, she excoriated her audience by insisting “nothing has been done” to combat climate change.

We are on the threshold of “virtually unlimited stores of energy” thanks to American energy independence when it comes to fossil fuels, but also America’s pioneering work on renewables and nuclear power.

Trump appeared to lay out his own framework for preserving the environment in a more practical way, saying his administration is “committed to conserving the majesty of God’s creation and the natural beauty of our world…today I’m pleased to announce that the US will join the 1 trillion trees initiative announced here at the World Economic Forum.”

But in what was by far the biggest blow to the extinction rebellion hysteria, Trump cited all the examples of climate alarmists being proved wrong in the prior decades.

“This is not a time for pessimism, this is a time for optimism. Fear and doubt is not a good process…to embrace the possibilities of tomorrow we must reject the perennial profits of doom and their warnings about the apocalypse. They are the heirs of yesterday’s foolish fortune tellers…they want to see us do badly, but we won’t let that happen. They predicted an overpopulation crisis in the 1960s, mass starvation in the 70s and the end of oil in the 1990s. These alarmists always demand the same thing – absolute power to dominate transform and control every aspect of our lives. We will never let radical socialists destroy our economy, wreck our country or eradicate our liberty. America will always be the proud, strong and unweilding bastion of freedom.”

Trump ended his speech with a look toward the future, lingering on America’s legendary ability to drive innovation, insisting that the “wonders of the last century will pale in comparison to what today’s young innovators will achieve because they are doing things that nobody thought even feasible to begin. We continue to embrace technology, not to shun it. When people are free to innovate, millions will live longer, happier, healthier lives.”

Though he didn’t mention him by name, Trump’s talk of looking optimistically toward the future was reminiscent of the rhetoric of Ronald Reagan, whom Trump has cited as a kind of political-spiritual predecessor.

Anybody who doubts the prospects of the future “need only look at the towering achievements of the past,” Trump said, before advising the world to move ahead with “towering determination and vision,” and to seize the day.

By drawing inspiration from the achievements of the past, “we will draw strength from the glories of the past and make greatness the mission of our future.”

Watch Trump’s speech below (he begins speaking at the 18-minute mark):