The College Degree Of The Richest Person In Every Country

The College Degree Of The Richest Person In Every Country

Money and education don’t always go hand-in-hand, but it doesn’t hurt to sway the odds in your favor by studying hard at college. However, sometimes choosing the most appropriate degree is the hardest part. It can be helpful to look for inspiration from people who have already become a success in your chosen industry.

A few months back, we showed you the College Degree of the Top‑earning CEO in Every State. Now we’ve researched and compiled a list of the college degree taken by the richest person in every country around the world.

The map we’ve created focuses on the undergraduate degrees that the world’s richest people have attained. There are instances where some of these people have attained qualifications without an undergraduate degree (e.g. Graeme Hart of New Zealand completed an MBA but has no undergrad degree, so is marked as ‘no undergrad degree’), but all people marked as ‘no degree’ have no higher-education qualifications at all. Some people also failed to complete their degree, they have been labelled as ‘incomplete’. There are also instances where a family is classed as a country’s ‘richest person’ and so we have labelled them according to their family’s cumulative qualifications (e.g. Croatia is marked as ‘multiple degrees’). In all instances we’ve tried to make the labelling as clear as possible, but for a more in-depth look check out our research here.

If you’re hoping your higher education is to be a stepping stone on the route to your first billion dollars, then check out the map below and see what undergrad degree is necessary to become one of the world’s richest people.

The richest man in the United States is also the richest man in the world, but Jeff Bezos had a lean 2019. The Amazon boss’s divorce settlement made ex-wife MacKenzie one of the richest five women in America and the world, allowing Bill Gates to briefly topple Jeff from the top spot. Jeff studied Electrical Engineering and Computer Science at Princeton, and MacKenzie studied English at the same institution a few years later.

The tiny islands of Saint Kitts and Nevis boast USANA founder, Myron Wentz, as their richest person. However, he was born in the US and switched his citizenship for the tax haven of St. Kitts in the 1990s. This is a marked difference from the likes of Bill Gates, who once said, “I’ve paid more taxes, over $10 billion, than anyone else, but the government should require people in my position to pay significantly higher taxes.”

Albania’s richest person, Samir Mane, didn’t make much use of his college degree when building his fortune. He began studying geology in Vienna in 1991 but quit during his first year. He later said, “basically I learned German there.” However, the language and cultural skills he picked up proved useful, as he built his business exporting cheap TVs and VCRs from Austria to his home country.

Bulgaria’s richest person, Vasil Bojkov, has an interesting education. He attended Bulgaria’s National High School of Mathematics and used degrees in Applied Mathematics and Labor Economics to power-up his trading, insurance, and gambling businesses. But he also has a degree in History of Art from Universidad de Buenos Aires. Bojkov’s patronage of the arts is renowned, and his enjoyment of beauty and creativity is evident in his famed antique collection because an education isn’t all about getting rich!

Africa is a continent of vast contrasts. Economically, South Africa is the most unequal country in the world. In Nigeria, the five wealthiest people have a combined fortune that outweighs the national budget, while six out of ten people live on less than $1.25 per day. This disparity can be traced between different countries, too. For example, Nigeria’s richest man, Aliko Dangote, has a US$8.8 billion fortune against Liberia’s Benoni Urey, who has ‘just’ $32 million.

Both made a lot of money selling things everybody needs. Dangote took Business Studies and Administration, but got his first business lessons in the playground: “I can remember when I was in primary school, I would go and buy cartons of sweets [candy] and I would start selling them just to make money,” he says. His company now supplies 70% of Nigeria’s sugar. Urey studied General Science, and his business interests include housing and Liberia’s biggest cellphone network.

The richest person in almost every Asian country is of the ‘billionaire’ variety. The overall number one is India’s Mukesh Ambani, boss of his late father’s gas and oil company. Ambani’s education is on the science side of things rather than business: he studied chemical engineering. But that doesn’t mean he is afraid to branch out, and the company recently launched a 4G service. “Anything and everything that can go digital is going digital,” says Ambani. “India cannot afford to be left behind.”

Taiwan, Thailand, China, and Brunei are among nations whose top billionaires have no degree at all. In some cases, wealth is inherited by royalty. But Li Ka-shing, China’s richest man and the 30th richest in the world, is a self-made plastics magnate who started his business with loans of just $6,500 when he was 21. He is known for his philanthropic work and recently pledged HK$1 billion ($127 million) to support businesses affected by the protests in Hong Kong.

Iris Fontbona inherited husband Andrónico Luksic’s mining and beverage empire in 2005. But the world’s richest Latina has capitalized on the opportunity by driving the family business to ever-greater success. Fontbana has no degree but has significantly expanded the mines and brewery business as well as buying majority shares in the TV channel, Canal 13.

The richest person in South America (with $24.6 billion) is another brewer. Brazil’s Jorge Paulo Lemann has controlling shares in Anheuser-Busch InBev, the world’s largest brewer, which in turn owns Pilsner Urquell and Foster’s Lager. But he originated his fortune as founder of investment firm 3G Capital. His degree is in Economics from Harvard, which must make it easier to count all that money. 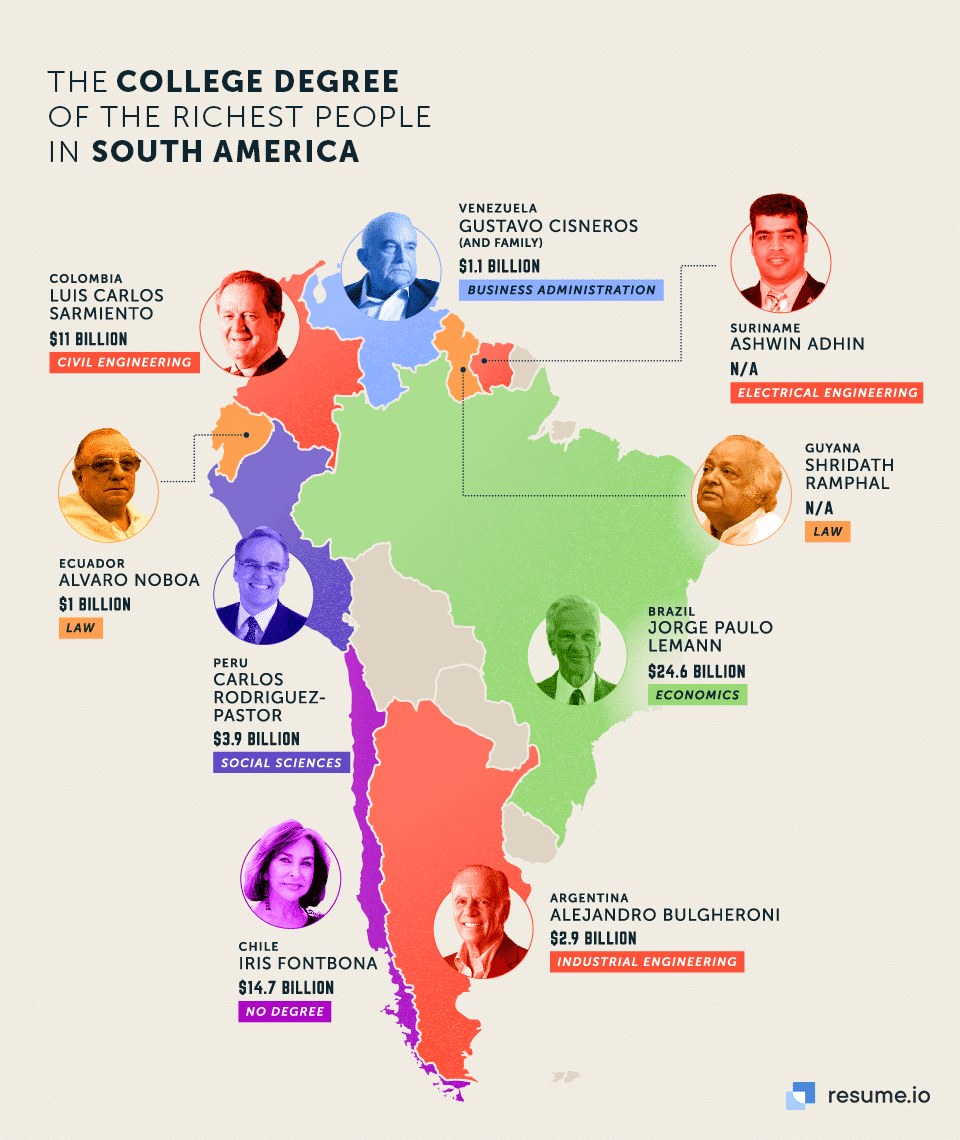 Oceania’s richest person, the Australian Gina Rinehart, began studying economics at the University of Sydney but dropped out to get a hands-on education at her father’s iron ore mining business. She learned well from what she saw. When her father died, leaving behind a bankrupt estate, Rinehart turned around the family business’s fortunes, transforming it into one of Australia’s leading mining concerns.

New Zealand’s Graeme Hart has earned an MBA from the University of Otago’s business school. Hart was admitted to the school without attaining an undergraduate degree and so in our map is marked  as having ‘no degree’.

There aren’t many teachers on our list of the richest people list. But Papua New Guinea’s richest person – former prime minister Michael Somare – used his teaching qualification to inspire young minds at several primary and secondary schools before going into politics.

When it comes to developing your career, your degree isn’t just about what you know – it’s about how your education makes you think. Sometimes the wisest choice is to pick a subject that will broaden your understanding of the world and to get your industry knowledge through work experience. How does your choice of degree relate to your choice of career?

To see the research behind this project visit bit.ly/RichestPeoplesDegrees

We began by researching the ‘richest person in X country,’ ‘wealthiest person in X’ and variations in French and Spanish, then sifted the first three pages of Google results. In all instances where articles existed that responded to the search term, there was a very clear consensus across the sources. The only divergence showed up between changes in the list over time (e.g., a list of the wealthiest people from 2017 versus a list from 2019). To find a back-up source, we’d search for ‘richest person in X’ followed by the name our initial search had thrown up.

No distinction has been made between people from a country but resident elsewhere and people both from the country and resident there. We allowed both to qualify. To insist on determining individuals’ citizenship or residency would undoubtedly have increased the number of ‘No data’ entries, not least as the super-wealthy are rarely tied to one country.

Note that the issue of wealth is a secretive one. Sometimes we could only find a small number of sources, and on occasion, footnotes for these sources were broken. In some other cases, sources claimed that a person was the richest (or made a claim as to their college degree), but the original source was not consistently backed up with a citation.

Concerning the qualifications our research focussed on undergraduate degrees. We have not included information on master’s degrees, doctorates or any other type of post-graduate degree. There were several instances where we could find evidence of a person gaining a degree but could not find what the degree was in. These cases are marked as unknown. In some instances individuals have attained qualifications without an undergraduate degree. For example, Graeme Hart of New Zealand completed an MBA but has no undergrad degree. In this case we have labelled him as having ‘no degree’.