FOMC Preview: Here’s What The Fed Will Say Today

FOMC Preview: Here’s What The Fed Will Say Today

With a global viral pandemic raging, and even the WHO admitting to “human error” in “accidentally” mitigating the severity of the disease to avoid a panic, it is easy to forget that at 2pm the Fed will announce its first policy decision for 2020, this time with uber-dove Neil Kashkari voting.

Here one can be cynical, and simply take the assessment of Northman Trader who does an exquisite job of summarizing what will likely be the key highlights from today’s FOMC announcement:

We see no bubbles.
Nothing we do juices stocks higher.
There’s uncertainty so we stay easy.
Rate hikes? Ha ha.
Rate cuts? Maybe, if the market wants them.
Wealth inequality is bad.
The Bezos party was awesome.

Joking aside, and even taking a more high-bro approach to previewing today’s main event, expectations aren’t particularly high for any surprises: rates will almost certainly remain on hold at 1.50%-1.75%, with only a technical adjustment of a 5bp upward move on the IOER the most likely shift (after several downward adjustments previously). Indeed, as Curvature’s Scott Skyrm writes, “the main thing to look for is a potential change in the IOER. Over the past two years the FOMC moved the IOER lower when fed funds were trading high within the target range. Many market participants are expecting a 5 basis point increase in the IOER in order to move the daily fed funds rate higher within the range.” 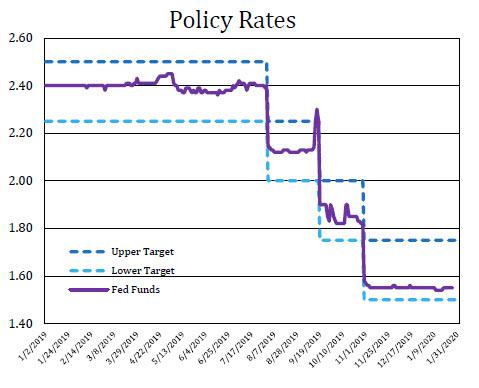 That said, Goldman writes that “the Fed is more likely to wait until March or later” on adjusting IOER, because while the fed funds effective rate briefly drifted down to 4bp from the bottom of the target range, it has since stabilized at a 5bp spread (in line with IOER). Additionally, in recent weeks, the New York Fed raised the offering rate on two of its term repo operations and cut the maximum size of February term repos modestly, both of which should exert some upward pressure on the fed funds effective rate.

Besides an IOER nudge, Jim Reid writes that DB’s economic team expects the meeting statement to be mostly unaltered relative to December’s communique and with the absence of an updated Summary of Economic Projections, that leaves Chair Powell’s press conference as the most likely source of new information. Here, the focus will be on five topics;

While probably not on the agenda, a key wildcard will be whether Powell discusses the Coronavirus outbreak, and how the Fed may approach any possible economy slowdown that results. In other words, will the Fed promise a “monetary” vaccine should the pandemic lead to a sharp slowdown in either China or around the globe.

There is also the chance of standing repo facility announcement, and while consensus is that this still seems premature, Bill Dudley told Bloomberg earlier today that it is possible the Fed could make a surprise announcement on it.

Another possibility today is for the Fed to announce further adjustments to its Temporary Open Market Operations in the near term, but as reserves continue to grow, a 5bp adjustment to IOER will become more likely.

What about the broader economy? Since the Fed last met in December, the growth picture has remained stable while inflation has fallen a bit short of expectations (as shown below). Financial conditions have eased significantly further, with a 37bp decline in the FCI since the last meeting, mostly driven by large gains in equity markets. This has in part reflected more positive news on the trade war with China, culminating in the signing of the Phase 1 agreement last week. 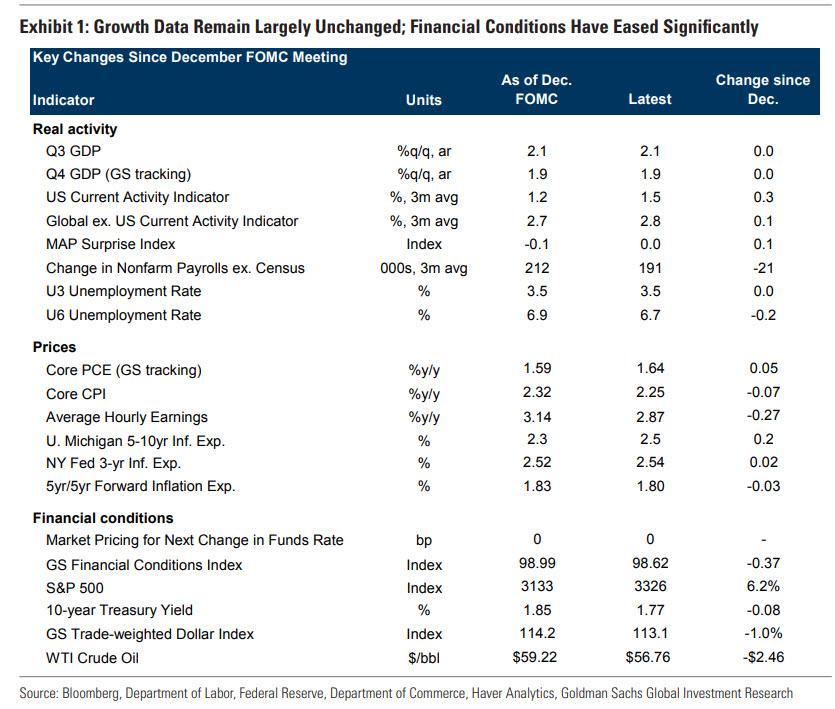 In light of the limited changes in the economic data, the January FOMC statement will likely show minimal text changes. Goldman expects a modest downgrade to the characterization of household spending growth from “strong” to “solid,” reflecting somewhat softer Q4 consumption data since the December meeting. The statement will likely retain the characterization of overall growth as “moderate” and of inflation as “running below 2 percent.”

Goldman does not expect any changes beyond the opening paragraph, with the statement continuing to characterize the current stance of monetary policy as “appropriate.” While downside risks have abated following better trade news and a continued easing in financial conditions, many Fed officials referenced slowing global growth, trade policy, and uncertainty as factors weighing on the outlook, even after the announcement of the Phase 1 trade deal on December 13. 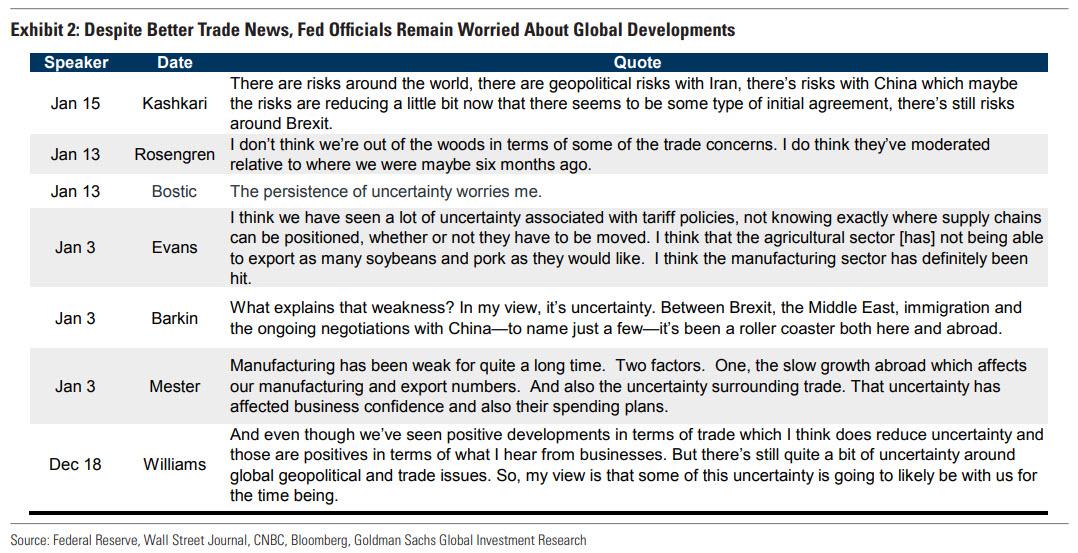 Fed officials have also increasingly mentioned geopolitical risks, including recent tensions with Iran. Goldman thus expects any acknowledgment of reduced risks from trade to come via the press conference rather than through any change in the statement, whose redline the bank believes will look as follows: 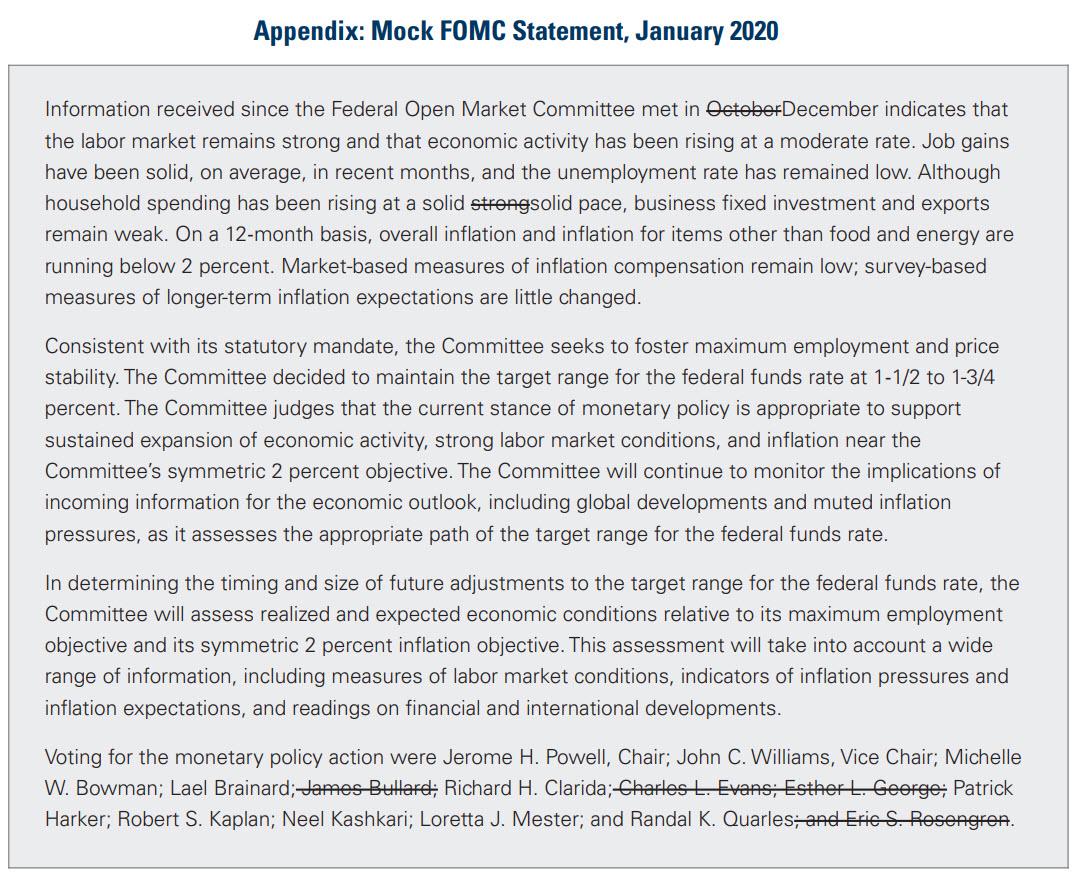 Statement aside, Goldman’s Jan Hatzius expects Powell’s press conference to reiterate comments made in the December press conference. In particular, expect a somewhat dovish tone that links any future hikes in response to inflation concerns to a significant and persistent move up in inflation and comfort with the “somewhat accommodative” policy stance. Powell, however, will avoid implying that either the current shortfall in inflation or possible future changes to the Fed’s framework create a need for further cuts, given the already accommodative policy stance.

As indicated in the minutes of the December FOMC meeting, the Committee will not reaffirm its existing Statement on Longer-Run Goals and Monetary Policy Strategy next week. While typically reaffirmed each January, this delay likely reflects the ongoing framework review, which is set to conclude in the middle of the year. As a reminder, the Fed is expected to formally adopt some form of average inflation targeting, most likely a “fuzzy” version which formalizes the Committee’s desire to have inflation run modestly above 2% in the strong part of the business cycle, but stops short of a mechanical commitment to make up for below-target misses with a proportionate easing bias later.

Beyond the January meeting, Goldman sees a high bar for policy moves in either direction, and expects the funds rate to remain unchanged in 2020, even if the market now prices in at least one rate cut this year. 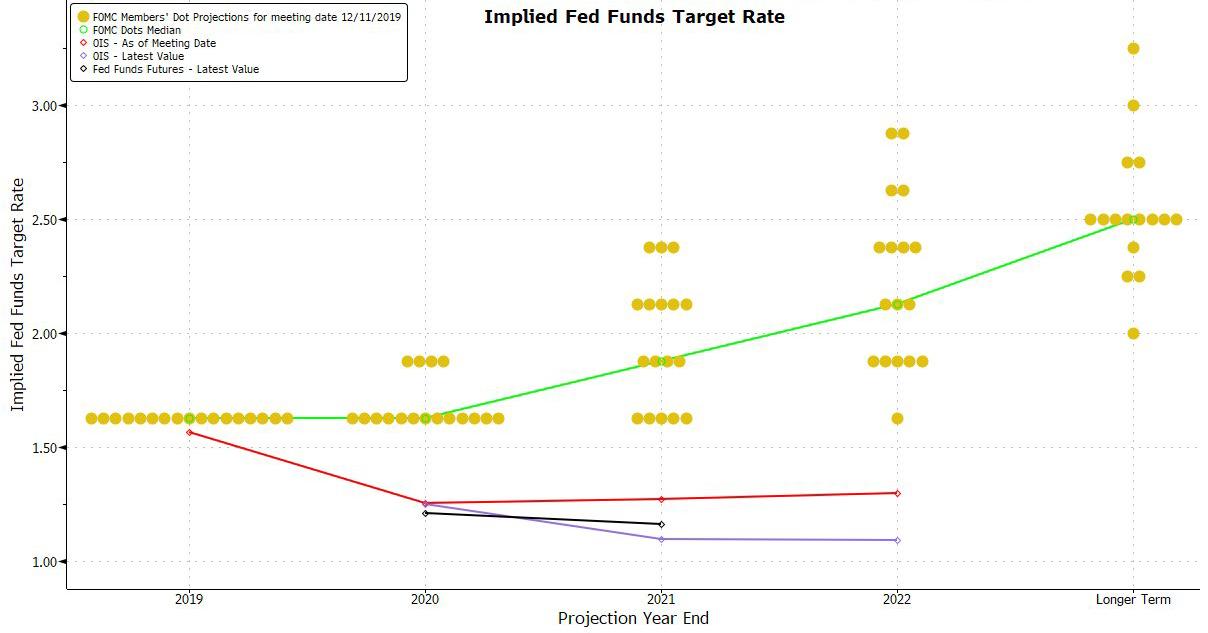 That said, comments from Fed officials also suggest wide agreement that the policy rate is likely to remain on hold for the near future, consistent with the median dot showing no rate change in 2020 and a relatively unified Committee, although should the S&P suffer a 5% drop, expect all this to change. 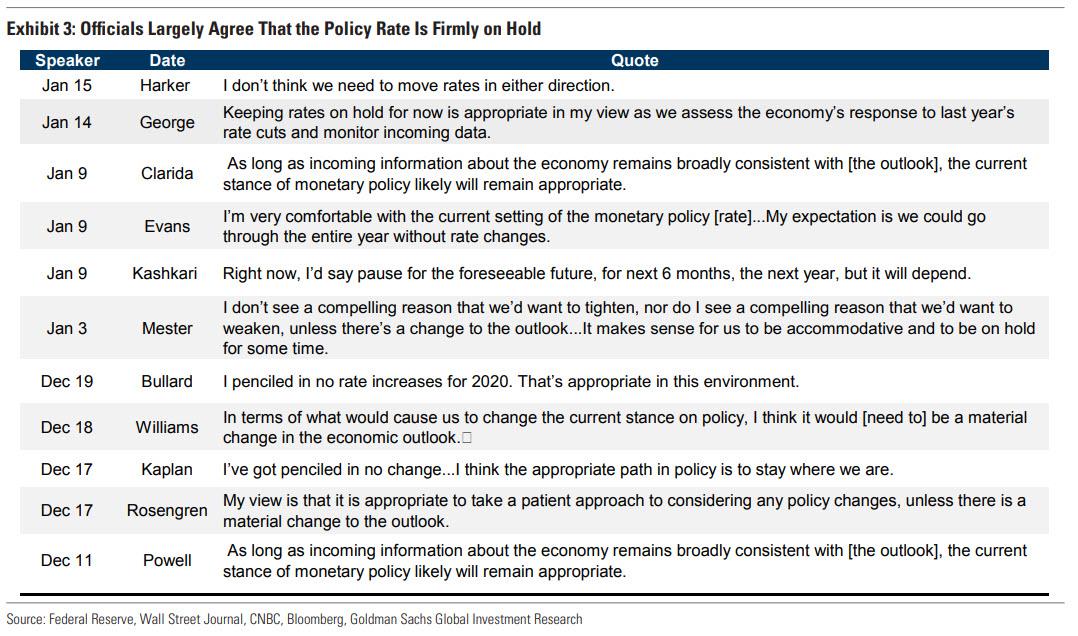 Finally, on balance sheet issues, given current Fed communication, Goldman expects the current $60bn per month of purchases for reserve management will run through mid-April at a minimum. Beyond then, the Fed will likely buy bills (and most likely short coupons as discussed previously, with BMO expecting the Fed to start buying coupons in mid-March) at a pace at least consistent with the growth of non-reserve liabilities, or roughly $10bn per month, indicating perpetual QE has finally arrived; amusingly, even Goldman admits that “broadly we think that risks are skewed to purchases being somewhat higher than our baseline.”