Tesla Explodes Higher After Crushing Expectations, Guiding Above 500,000 Deliveries In 2020

Tesla Explodes Higher After Crushing Expectations, Guiding Above 500,000 Deliveries In 2020

… as euphoric expectations for unprecedented demand in China triggering a Volkswagen-like short squeeze, and ironically surpassing the world’s largest automaker, Volkswagen, in valuation in the process, everyone was looking forward to today’s earnings report, and specifically the company’s guidance, to see just how much of the massive runup was justified. To be sure, the rally that prompted a scramble amid Wall Street analysts to boost their price targets on the stock, may not have left room for any mistakes and as Credit Suisse analyst Dan Levy said, “expectations are likely highly elevated into the print, and at first glance any miss could lead the stock to some correction from its lofty level.”

So what Tesla deliver? At first glance the answer is yes with solid beats on the top and bottom line, as well as a surprising early start to the production ramp of the Model Y:

Here are the results summarized: 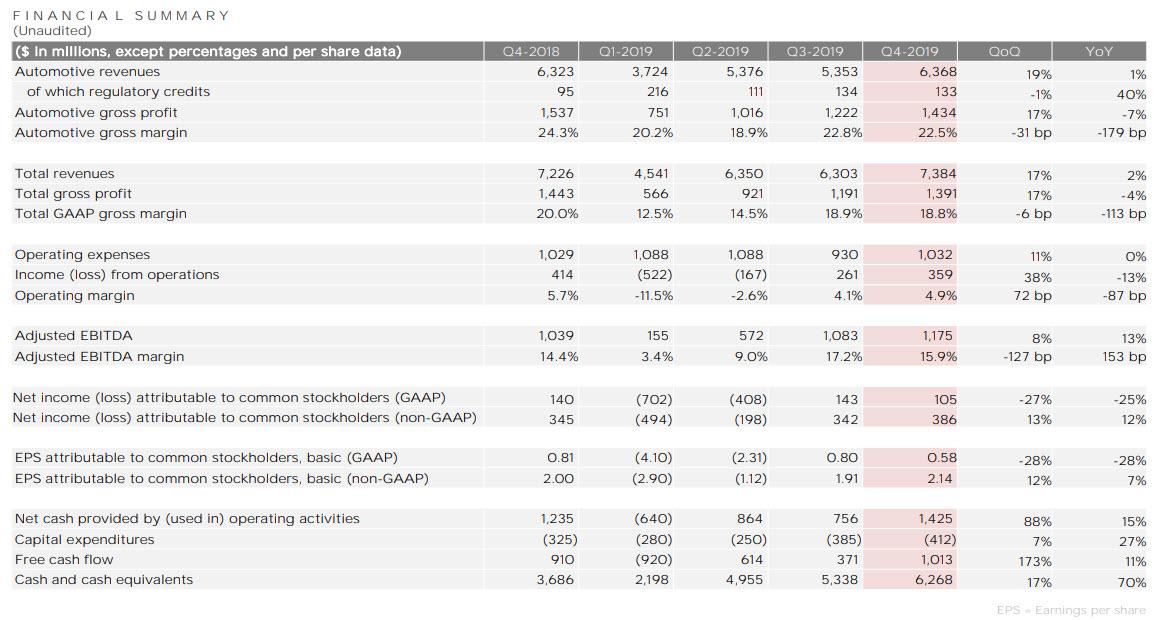 That said, Tesla skeptics were quick to note that compared to Q4 2019, Tesla reported:

Meanwhile, Tesla’s automotive gross margin, closely as the company sells more and more of its lower-priced Model 3 sedan, dropped to 22.5% in Q4, down from 24.3% the previous year.

More importantly, Tesla unveiled that in the quarter, Free Cash Flow soared above $1 billion, rising to $1.013BN from $371BN in Q3, more than double the $446MM estimate, and up from $910MM a year ago, as a result of $1.425BN in net cash from operations less $412MM in CapEx, well below the $574.3MM estimate, making one wonder just how long can Tesla continue with such low Capex spending. 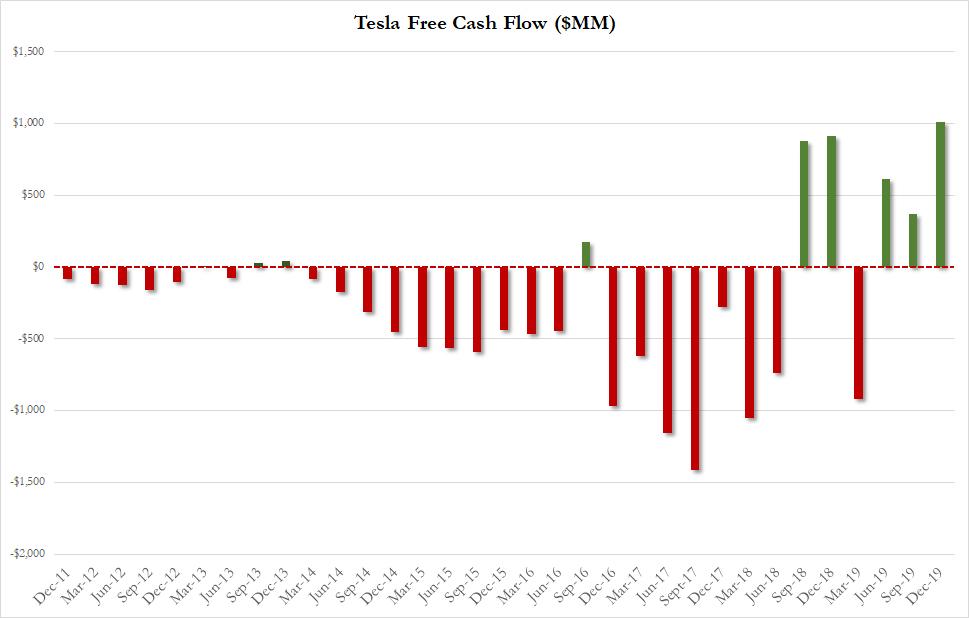 Just as importantly, looking ahead, Tesla said that it now expects full year 2020 vehicle deliveries to “comfortably exceed 500,000 units.” It also expects Model Y Production in Shanghai to Begin in 2021 and noted that the production ramp of Model Y in Fremont has begun. As a reminder, on the last earnings call from Q3, Musk predicted Model Y would hit volume production, in other words more than 1,000 units per week, by the middle of 2020.

And while Tesla talked about producing the Tesla Semi, Roadster and Cybertruck in North America, it did not disclose where, especially since the Fremont factory will likely be filled with Model 3 and Model Y.

Below is a summary of the Company’s key projections:

Tesla also said its vehicles have driven 3 billion miles in Autopilot mode to date, adding that all Tesla vehicles equipped with a full self driving computers have now also been updated with the latest software: “We are currently validating this functionality before releasing to customers, and we look forward to its gradual deployment.”

The company also reported that in Q4, it continued to ramp its Solarglass Roof production and installations, and in addition to Tesla installers, it partnered with several roofing companies to support installations to fulfill demand for Solarglass Roof. In regard to this, Tesla said that “solarglass tiles are made in our Gigafactory New York, and we are hiring hundreds of  employees at this facility.“

In kneejerk response to the earnings, primarily the company’s profit and cash flow boost, and the news that production on the Model Y has begun, TSLA stock exploded 7% higher, rising to a new all time high, and trading at $620 per share last, its market cap now nearing $110 billion, $10 billion more than Volkswagen. 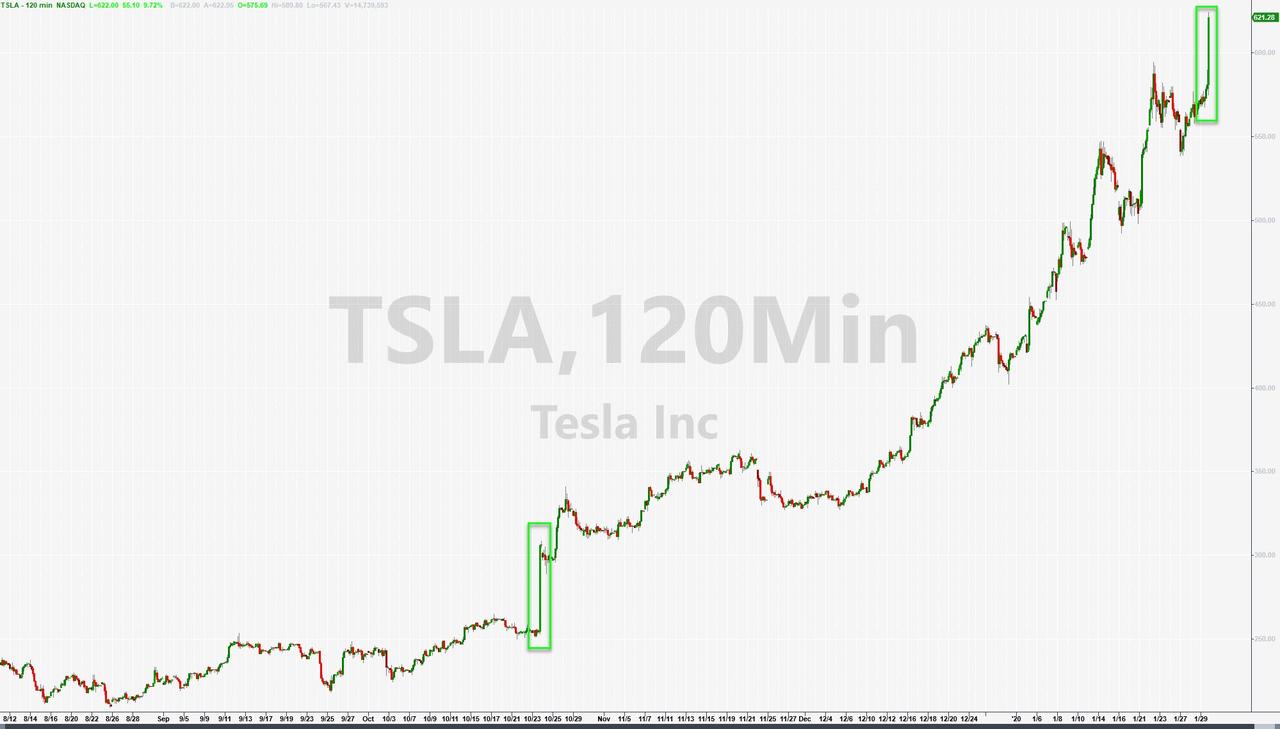 And just a few minutes later it is already $40 higher as the furious short squeeze decimates shorts, the stock rising above $660, now up 13% after hours. 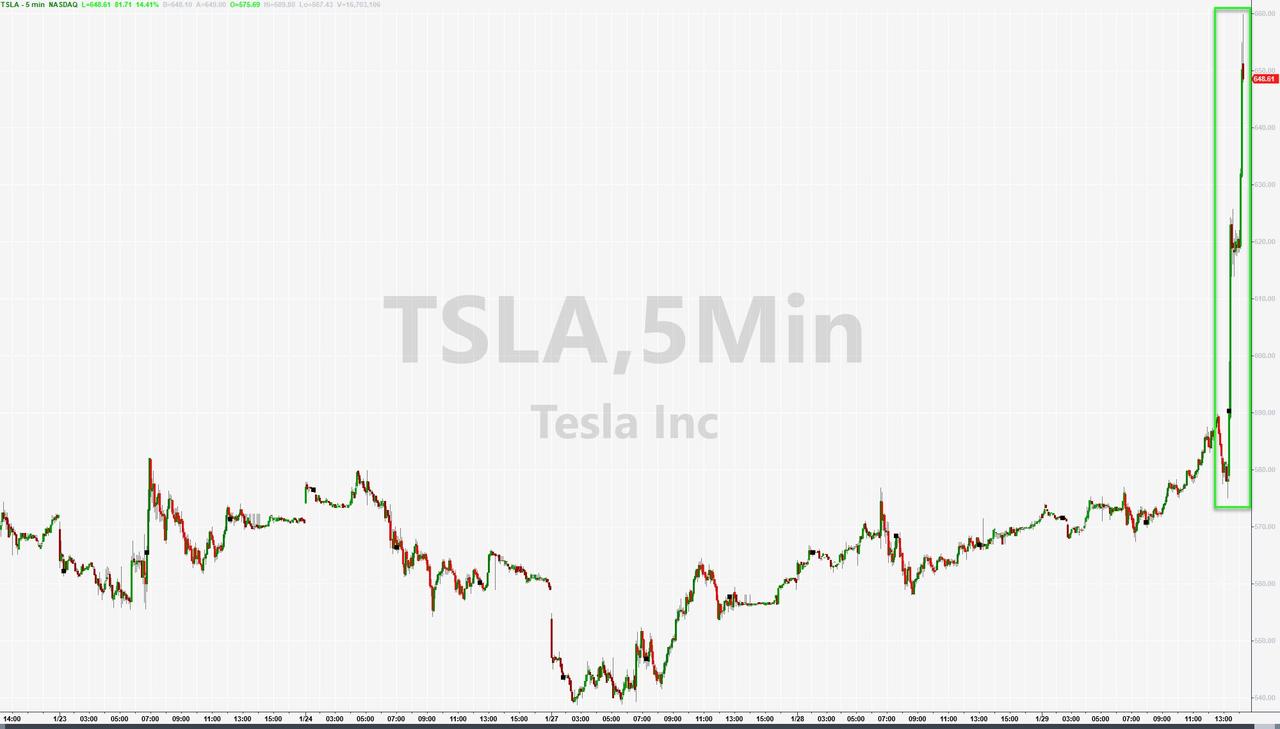