Last week, I asked the question of whether the “correction was over?” To wit:

Well, that bounce came hard and fast during the first half of the week, as the S&P 500 rebounded off the 50-dma to set new highs on Thursday.

As noted, the market bounced firmly off the 50-dma and rallied back to new highs on Thursday. While Friday saw a bit of retracement, which isn’t surprising given the torrid move early in the week, the “virus correction” was recovered. Importantly, the “buy signal,” in the lower panel, was close to registering a “sell signal.” The sharp early-week rally kept that signal from triggering, which would have confirmed the “sell signal” in the top panel. Historically, when both “sell signals” are triggered, deeper corrections have tended to follow.

Previously, we discussed that we had taken profits out of portfolios as we were expecting between a 3-5% correction to allow for a better entry point to add equity exposure. While the “virus correction” did encompass a correction of 3%, it was too shallow to reverse the rather extreme extension of the market. The rally this past week has reversed the corrective process, and returned the markets to 3-standard deviations above the 200-dma. Furthermore, all daily, weekly, and monthly conditions have returned to more extreme overbought levels as well.

Of course, the reason for the rally was more liquidity from the Federal Reserve.

While the economic impact from the virus is likely to be substantial, as discussed previously, traders looked past economic realities. They focused instead on more liquidity being pumped into the markets by both the Fed, and the PBOC (Peoples Bank of China).

“The PBOC decided that instead of unwinding the large liquidity provision, they would double-down on it… and that they did in size. The last four weeks have seen China supply over CNY2 trillion (net!) into its financial system – something we have never seen anything like before…” – Zerohedge 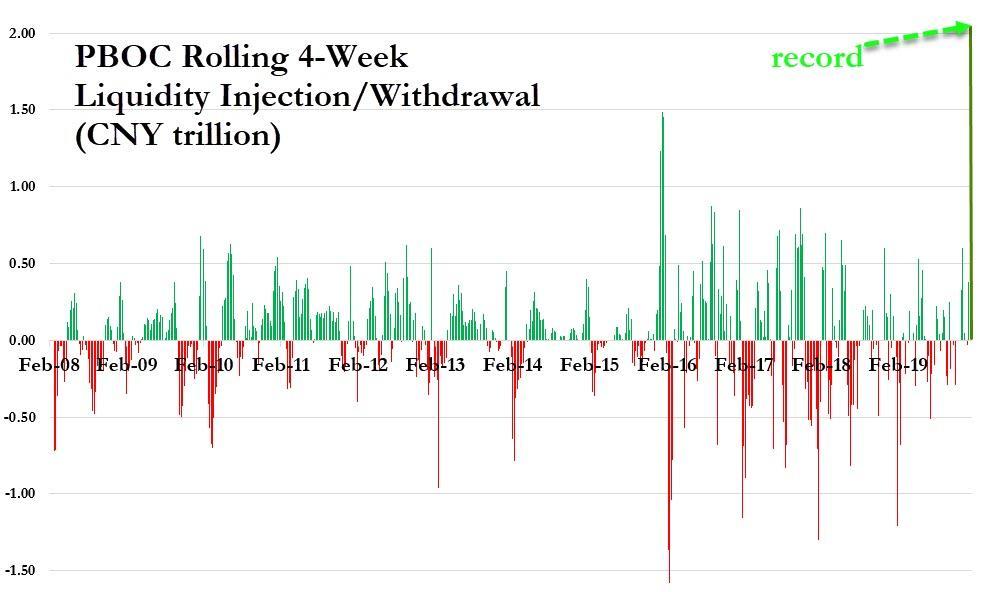 But, as I stated, it wasn’t just the PBOC, but also the Federal Reserve dumping tremendous amounts of liquidity into the markets which only had one place to go….equities.

While the Fed continues to deny current liquidity interventions are indeed “QE,” they have been clearly concerned about the potential of global instability impacting the U.S. In their most recent report to Congress, the “coronavirus” made its appearance as the latest threat to the global economic instability.

Do NOT dismiss that last sentence lightly.

Since last October, the Fed has been injecting the financial system with massive quantities of liquidity to fix “short-term funding needs.” Each time they have tried to slow the rates of funding, the market has declined, so they extended the facility. Initially, the facility was for October tax payments. Then it was extended for the “year-end” turn. Then it was extended for April “tax payments.” The “coronavirus” will be the next reason to extend the program into June.

Just in case you missed our previous report on this issue, the importance is that this type of funding has not occurred to such a magnitude outside of a financial crisis.

The question you should be asking is: “exactly what is going on?”

Currently, the flood of liquidity has been pulling foreign capital back into U.S. Dollars. While the U.S. dollar had previously started to breakdown heading into year-end, which gave a boost to commodities and oil. Unfortunately, that breakdown has been reversed.

We did this analysis for our RIAPRO Subscribers (Risk-Free Trial For 30-Days) this past week, which warned them of the potential for a continued dollar rally. The importance of this rally is that a stronger U.S. Dollar is not friendly to commodities, international, and emerging market exposure.

While there has been a good bit of excitement over the last couple of weeks of improving economic data points, it will likely be short-lived. Given these data points are both “sentiment surveys” and “lagging” in nature, what they captured was the uptick in commodities seen at the end of 2019 as the dollar weakened on “trade deal” hopes.

What has yet to be captured is the subsequent reversion in the major, economically sensitive, components. While the markets have rallied on news of more liquidity, the impact from the “coronavirus” has only yet started to be felt economically. Even if the virus was cured today, the economic impact will continue to be felt over the rest of this year.

Importantly, the impact on China will be substantially greater, which will undermine any potential positive to the U.S. from the “trade deal.” That impact will result not only in the form of weaker economic growth in China, but globally as well due to the interlinked supply chains. This is going to manifest itself in weaker earnings and corporate profits, which will continue to make elevated asset prices harder to justify.

As shown in the long-term chart below, despite the short-term correction, which is barely noticeable, the market remains extremely extended, overbought, and pushing into the top of its long-term trading range.

Furthermore, the put/call ratio, which warned of the previous correction is once again pushing extreme levels rarely seen from a historical perspective.

The rally this past week serves as a stern reminder that market participants are trained to respond to “Pavlov’s Bell.”

For the time being, investors have gotten away with overpaying for value, ignoring risk, and chasing yield. Eventually, the party ends, and it always ends in the most brutal of fashions.

This is why it’s important to have a process and adhere to it.

We have had quite a few emails from readers over the past week asking why we were “buying” into our RIAPRO portfolios this past week.  (You can register for a 30-day RISK-FREE trial if you want to view our current portfolios.)

The short answer is:

“Because that is what our process required us to do.”

To understand the process, we have to go back.

A few weeks ago, Shawn Langlois at MarketWatch picked up our article discussing why we were selling positions in our portfolio. To wit:

“Specifically, Roberts raised cash by selling off shares of Apple, Microsoft, United Healthcare, Johnson & Johnson, and Micron, and scaling back overweight holdings in various ETF sector plays, such as the Technology Select Sector SPDR, and the Health Care Select Sector.“

While at the time, it seemed like a wrong move, a couple of weeks later, the market sold off. The benefit was the extra cash, and reduced exposure, help limit the downside draw to about 1/3rd of the market decline.

“With bond yields plummeting this past week, our bond exposures have gotten extremely stretched. The sell-off in the market, combined with the ‘risk off’ rotation to bonds, sets the market up for a reflexive bounce. The duration and magnitude of that bounce will be critical as to our next steps in positioning.”

As noted, the market had gotten oversold on a short-term basis, which brought the risk/reward measures back into better alignment. This is where our process required we add equity exposure back into portfolios.

Importantly, this rebalancing of risk did not dramatically increase our equity exposure. This is because, as noted above, the longer-term technical outlook remains “cautious.”

Yes, we realize we are very late-cycle, we also know that with the Fed, and global Central Banks, still intervening, we must give deference to the “bullish bias.” At the moment, the bullish bias remains, and functioned as we predicted last week.

“The ‘bullish bias’ is not dead as of yet, and investors will be quick to try and ‘write off’ the impact of the ‘virus.’ After a decade of ‘macro-events’ not stopping the bullish charge, the belief the market is ‘bulletproof’ has become so deeply ingrained into investor mentality it won’t be dislodged until it is far too late to matter.”

We have no certainty about when, or what will trigger the next bear market.

What we do know is that such an event will likely be far more brutal than most realize due to years of excess risk-taking, leverage, and demographics.

However, this is what our process is designed to handle:

Importantly, notice that everything the process covers is the management against the “risk” of loss.

If we manage against the risk of capital loss, we can safely participate with markets as they rise. When something eventually does goes wrong, the process will systematically close out positions, protecting our investment capital, until that process is complete. Then the process reverses to rebuild exposure when risk/reward dynamics are greatly improved.

As long as the process is followed, risk can be controlled. Where the majority of investors go wrong, is by not having a process.

“Hoping” markets will continue higher indefinitely, is not a process.

As we concluded last week:

“We won’t know for sure until after the fact. This is why we manage risk in the short-term. Managing risk allows us to navigate the ‘twists and turns’ of the market without careening off the cliff.”

The Fed Won’t Save Us from the Growing Jobs Recession

Tucker Carlson and AOC Are Wrong About Christianity and Usury