Authored by M G via The Burning Platform blog,

The Creepy Line is a particularly sinister term used in an unguarded remark by former Google CEO Eric Schmidt in 2010. In hindsight, what is most disturbing about the comment is how casually he explained Google’s policy regarding invading the privacy of its customers and clients.

“Google policy on a lot of these things,” Schmidt says about 45 seconds into the introduction, “is to get right up to the creepy line and not cross it.” Time pointer needed.

The Creepy Line is an 80-minute documentary available through several options available here.

For now, it is available for free at Amazon Prime, but I’m not sure how long it will be offered there considering many current concerns regarding censorship of anti-establishment themes on various social media platforms.

This film offers a very frank look at the number one source of news in our country: Facebook and Google.

Early in the film, you will discover how Google acquired an enormous and permanent cache of data about users. Initially, the data was used to refine search algorithms used to help index the websites and information uploaded to the world wide web. Now, however, it is used to fine-tune ads and content that most suits your interests, storing the information to better provide content suggestions for you. But, this film will give you a really disquieting idea (at least it should) about what else they may be doing with that data.

Initially, Google was simply the most popular Search engine, basically the largest available “indexing” algorithm on the net. Then, Google came up with Google Chrome, a browser, to track and log not only what you look for but also where you go and every keystroke you make while there. In fact, Google realized they could serve you best if they know what you are doing even when offline, which is why the the Android system can track you everywhere you take your phone. With all the free apps available and used globally, Google has a very accurate picture of what everyone’s daily life looks like anywhere in the world. 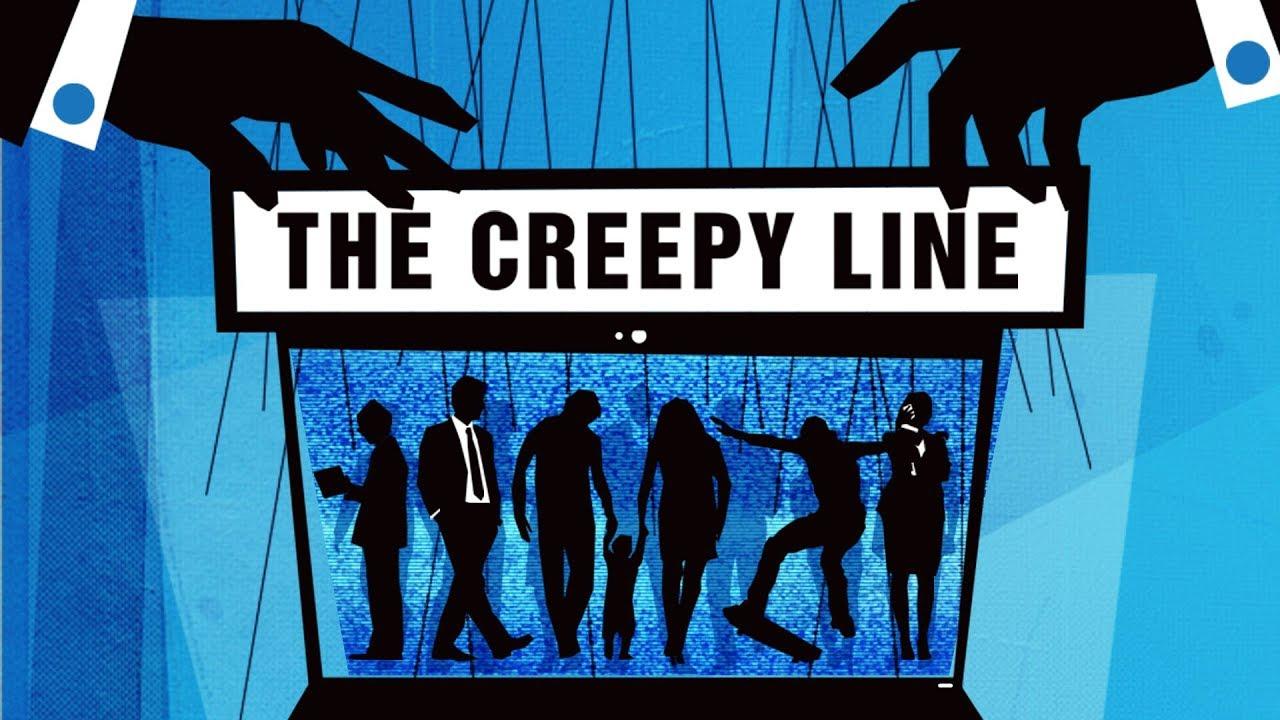 At intervals during the presentation, Professor Jordan Peterson offers insight from his own experience with social media and agenda setting.  For those unfamiliar with Peterson, he was propelled into fame when he very publicly refused to use the new gender pronouns approved by Canada’s Political Correct Policy. Peterson’s outspoken refusal to yield to the thought police led to him being interviewed as being a spokesman for the Millennial Mindset, especially their willingness to accept new technology without questioning it.

“These are all free services but obviously they’re not,” notes Peterson, during his commentary, as he discusses the impact upon his life his sudden notoriety and the negative publicity Google and You Tube caused for him. He discusses his own battle with depression as well as insights into his daughter’s experiences with social media, which gives him special psychiatric insight into teenage (millennial) angst, perhaps.  Some may find his frank openness about the issues off-putting, but he comes across to me as a man who has walked through hell and doesn’t want to talk about it, but has decided he will do so, if you are interested. I find Peterson’s point of view extremely relevant, especially in light of the the news regarding Peak Prosperity’s de-platforming today and the implications for our own sources of information going forward.

He is not the main speaker during the film, but Peterson does an excellent job explaining how the surveillance business model works.  This leads to a discussion of how Google Maps, Google Docs, and the use of Gmail (even drafts of emails you don’t send!) combine together to form and shape your thoughts and behavior, similar to a bunch of people in a control room with dials which monitor and control your every interaction with the world. (15:28)

Less than ten minutes into the movie, you might have already decided to turn to non-Google search engines, but there is no hope of your retrieving any information they already have on you. It belongs to them, a legal point discussed several times during the presentation.

We already know Facebook censors conservative views and downplays trending stories favorable to conservatives, and the movie assures us Google and You Tube work on similar algorithms. Algorithmic choices must be based on something, but to remain supposedly objective, nothing should be completely filtered out, only put into some sort of rational order. Rational could be chronological, or most viewed, or relevant, for instance, but for that rational variable in the algorithm, something will come first.

As long as nothing is excluded, albeit, as long as you can find them on the list somewhere, there is at least a rational reason for their placement and the semblance of objectivity is retained.  Whether you agree with the rationality is not relevant at this point.  Except, that we know filters are restricting information for very irrational reasons.

In the discussion, we discover Facebook Social Engineers insert stories into news feeds which they want people to see. This means not only is Facebook a gatekeeper for your news, they are also propaganda pushers. The concerns that Facebook could easily influence elections by sending messages to certain types of individuals most likely to be influenced deserves at least some discussion by some governmental agency, doesn’t it?

Well? the discussion with Zuckerberg during the film shows his disregard for users’ privacy concerns.  That CYA attitude is obvious throughout when we are reminded of all the “terms of use” we have agreed to over the years.

Facebook and these other internet entities claiming company rights without accountability are communities without voting citizens. Since the majority of voters claim to get their news from Facebook or Google associated sources, this is an issue people should realize really will impact our ability to use social media for reliable news.  We have no access to details concerning how decisions are made regarding censorship on any of these platforms.  We have every reason to believe they are not necessarily rational or definitely are not ethical. While Facebook seemed at one time to be a wonderful way to connect humanity across the world, it brought with that connection an overabundance of unintended consequences which may introduce a new Dark Age.

Google and Facebook are a kind of corporate partnership which has unprecedented power and influence over public opinion. Psychologist and Google critic Robert Epstein (a large contributor to the documentary) found that, by sheer coincidence, the day after he wrote an article called “Could Google Tilt a Close Election?” he couldn’t access the Internet through any browser. If you are time-constrained and hope for the meat of the matter, around the 34-minute point, Peterson discusses his reaction to Former Google CEO Eric Schmidt’s comment about getting close to the creepy line but not crossing it.  He suggests cultures once taught children to stay away from the creepy line, but that somehow, digital capability has altered the understanding of what the creepy line represents.

The movie discusses the concepts behind Search Engine Manipulation Effect (SEME) which has powerful implications since 90% of searchers select the first on the list. At 38:30 a good introduction to the impact of Negativity Bias helps explain the ability to suppress ideas deemed “negative” in public opinion.

“If they have this kind of power then democracy is an illusion,” says Roger Epstein.

At 44:28, you will discover that the Federal Government runs on Google and when you learn how much of our nations classified data is trusted to Google, it should make most of us even more aware of our lapses in internet discernment in days gone by.

I believe, it is vital to note the film was made by the makers of “Clinton Cash.”

And Google executive Eric Schmidt, infamous for his “creepy line” comment, became part of the Clinton campaign in 2016 but by then, we’d all come to realize there was something a little creepy about Google, anyway, hadn’t we? While the video does provide a lot of anecdotal evidence with some scientific (social statistics) analysis to support the idea that internet gatekeepers introduce liberal bias, the evidence is sketchy about how internet platforms are monetized and what we might do to resist the influence these tech giants possess in our government institutions.

This is a discussion  we should force our federal servants to have because those agencies have become part of the hiring grounds for big tech companies.  They simply hire influence.  It is a discussion we do need to have as we face the direction technology is pushing us toward: Artificial Intelligence (AI) and Artificially Intelligent Decisions.

Instead of War Games’ discovery there is no way to win, AI may decide nobody really has a need to know who won. Google got caught before favoring its own commercial services by antitrust regulators, which is discussed in the movie. Assuming those who control Google might very well show favor in politics is a valid worry when considering the ability of many of their hired “monitors” to delete or insert content based on their own bias at will. (The video discusses several known instances of this happening.)

Unfortunately, there is not an obvious solution, but one suggestion is that Google, Facebook, YouTube, et al be legally defined as media companies and be subject to the same legal burdens which apply to mainstream media corporations. In other words, the suggestion is that they be held accountable for their actions. These enormous companies have created algorithms that in turn have created sorting systems that attempt to direct and control (quite successfully) every aspect of our lives, without our even being fully aware of their impact on our decisions.

It is time we educate ourselves before we become “re-educated.”

Overall, I think The Creepy Line is a good way to begin a much needed public debate, but it is at least a way to get yourself educated a bit about why you should send a donation to The Burning Platform today and thank Jim Quinn for continuing to host a wide variety of contributors here at this page while he can.