Anyone with the slightest bit of common sense has ditched their dream trip to Europe as Covid-19 steamrolls across the continent, with Italy, France, Spain, and Germany, so far experiencing the brunt of the virus outbreak. 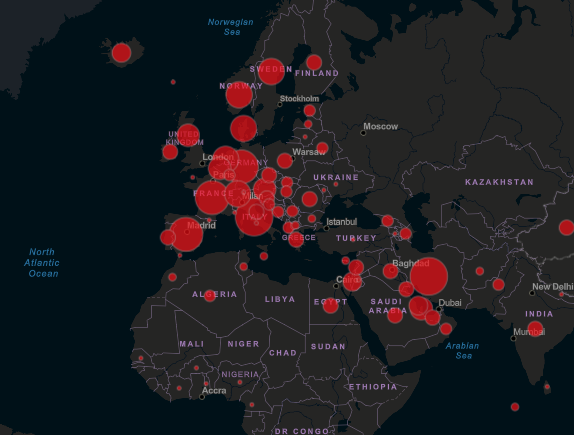 As a result of mass quarantines and businesses’ shuttering their doors, Europe’s travel industry, accounting for 782 billion euros to GDP in 2018 and 14.4 million jobs, is on the verge of a deep correction.

In particular, we’re going to focus on Spain, where authorities have reported 2,277 confirmed cases, 55 deaths, and 183 recoveries. Spanish officials imposed limits on holding large public events to cut down on the transmission risk of the virus.

Crowded supermarkets in #Madrid (Spain) after the government announced new measures to limit the spread of the #coronavirus pic.twitter.com/ujgyaKQsTB

The fear of the outbreak has led to a bust in the Spanish travel industry, as of Thursday, Reuters reports that occupancy rates at hotels have crashed.

“A tsunami has arrived. A meteorite has fallen on us, and we have to see how we survive,” Estalella said.

He has requested the Spanish government to take quick action to protect the travel industry from a massive bankruptcy and job loss wave that could decimate hotels and or the industry as a whole.

More than 2.65 million jobs in Spain are reliant on tourism, accounting for 159 billion euros to GDP in Spain, or about 11.7% of GDP. The crisis is so bad at the moment for Spain’s tourism industry, on top of an existing economic downturn, that a full-blown recession could be nearing.

President Trump’s travel restrictions on 26 European countries, including Spain, to help combat the spread of the virus, for the next month, could further pressure tourism for the first half of the year.

Spain’s economy is coming to a crawl this week with mass gatherings banned, schools and universities canceled, and a reduction in business hours.

All soccer matches in the country have been suspended for two weeks after Real Madrid put its team in quarantine for virus infection fears.

Take note of how the virus outbreak is grinding Europe’s economy to a halt, especially triggering a bust in tourism and services. Community spreading in America is already underway, the same shutdowns in Europe are going to happen here.

Attacks On “White, Male” Moon Landing Prove No US Achievement Is Beyond Liberals’ Virtue-Signaling Rage

Home Equity Theft: How a Man’s Home Was Seized Over $8.41 in Unpaid Taxes