For the past 9 years ever since the downgrade of the US government by S&P from AAA to AA+, American energy giant Exxon, which back in 2007 had a market cap of over $500 billion only to see that cut by two thirds to $150BN today (half of where it was at the start of the year) , had the same Standard and Poor’s credit rating as the US government. That period of perplexing parity ended just after 1pm on Monday, when S&P, confirming it would move quickly on rating downgrades this time following a near record plunge in the price of oil last week, downgraded Exxon from AA+ to AA as Exxon’s “Lower Oil Price Assumption Weakens Cash Flow/Leverage Metrics”; and since the outlook is negative, it means more downgrades are coming.

Highlights from the downgrade below:

The full note is below:

Hit by moderating crude oil and natural gas prices and an increase in capital spending, and with downstream and chemicals margins dropping to a five-year low, ExxonMobil’s cash flow leverage weakened significantly in 2019 with FFO/debt falling below 45% from over 60% in 2018, and debt to EBITDA increasing to 1.8x from 1.2x. In addition, the company’s discretionary cash flow deficit came in at about $10 billion, leading to an increase in debt levels. Based on our revised oil and natural gas price deck assumptions and our outlook for continued weakness in the refining and chemicals sectors, we now expect cash flow leverage to remain weaker than our expectations for the ‘AA+’ rating over the next two to three years.

The negative outlook reflects S&P Global Ratings’ view that Exxon Mobil Corp.’s current financial leverage is weak for the rating, as well as the potential for a downgrade if credit measures do not improve over the next 12 to 24 months. We project FFO to debt to be in the 45% to 50% range and debt to EBITDA of about 1.7x in 2020 and 2021, as oil production increases and refining margins increase due to improved reliability relative to 2019. Our estimates assume the company exercises prudent financial policies in the near term including tempering capital spending and limiting share repurchases in 2020, and that it takes additional steps to improve leverage over the next two years.

We could lower ratings if we no longer expected leverage to improve such that FFO/debt approached 60% and debt/EBITDA approached 1.5x for a sustained period. This would most likely occur if the company did not adjust capital spending in light of lower commodity prices, failed to improve capital efficiency or refining and chemicals margins, did not execute on additional asset sales, or continued to return cash to shareholders beyond internally generated cash flow.

We could consider a revision of the outlook to stable if the company were able to bring FFO/debt back closer to 60% and debt/EBITDA to around 1.5x for a sustained period, achieving these levels even at our long-term West Texas Intermediate (WTI) price deck assumption of $50 per barrel (bbl). This would most likely occur if the company were able to boost operating efficiency, improve refining and chemicals margins, complete more asset sales than we are currently projecting, or reduce shareholder distributions.

And with Exxon down, we now await as some $140 Billion in BBB rated “investment grade” energy debt is cut to junk… 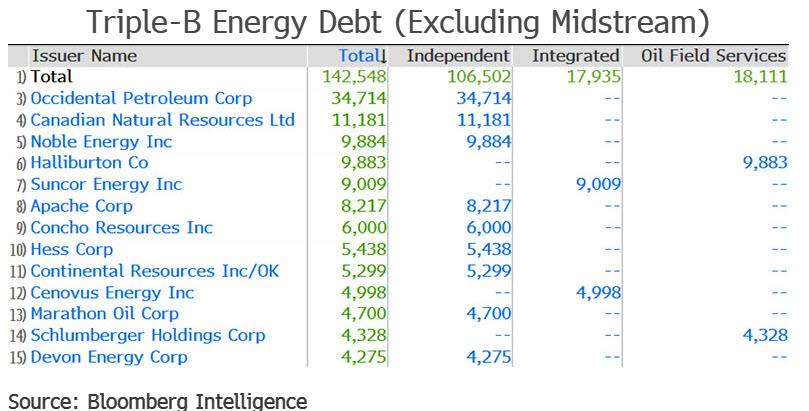 .. finally starting the fallen angel avalanche which we have been warning about since 2017.

If the US Wants to Beat China, Why Is It Copying China’s Socialism?