Amazon “Retaliates” And Fires Worker Who Organized Strike Over Virus

Amazon “Retaliates” And Fires Worker Who Organized Strike Over Virus

On Monday, dozens of Amazon workers at a New York fulfillment center walked out around lunchtime and conducted a strike to raise awareness of the company’s lack of safety protocols during the COVID-19 pandemic. Now it appears the leader of the strike was fired, reported Bloomberg.

Chris Smalls, an employee at the Staten Island Amazon warehouse, said the company fired him after he organized a strike with fellow workers on Monday to demand Amazon close the facility for sanitizing.

“Taking action cost me my job,” Smalls told Bloomberg. “Because I tried to stand up for something that’s right, the company decided to retaliate against me.” 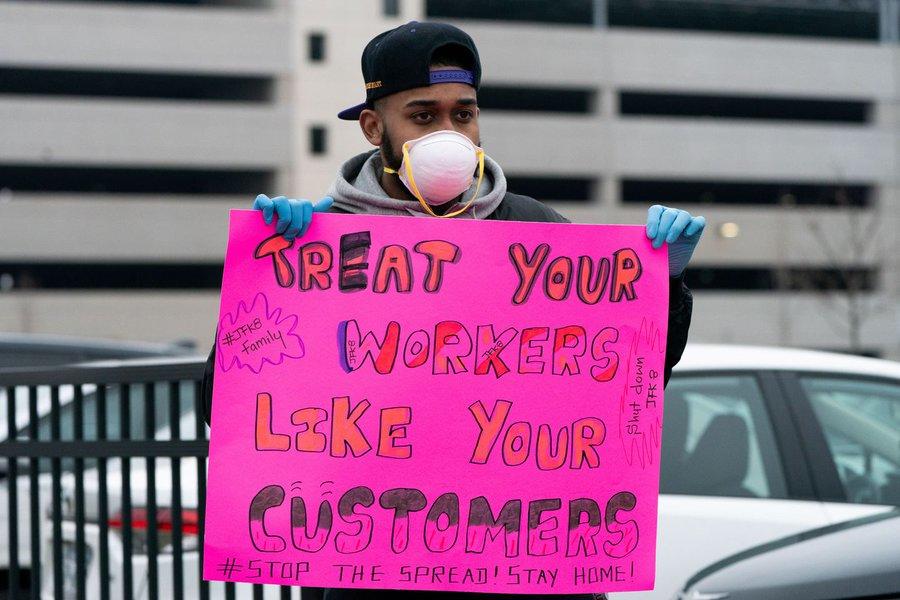 Smalls claims several employees have tested positive for COVID-19. We noted on Monday that about 100 employees were expected to protest, Bloomberg notes the total was around 60.

I held safe calm rallies in the break room everyday this week I was not on paid quarantine don’t believe the Hype #AMAZON #stopthelies You sent me home Saturday but not these people who were direct contact with a positive tested supervisor to keep operations going pic.twitter.com/P1spN8uaNU

New York State Attorney General Letitia James responded to the firing of Smalls as “immoral and inhumane.” James said her office “is considering all legal options” against Amazon.

Amazon’s response to the firing was that Smalls violated company policy of a 14-day quarantine when a fellow employee tested positive for the virus.

“Mr. Smalls received multiple warnings for violating social distancing guidelines and putting the safety of others at risk,” Amazon said in a statement. Smalls “was asked to remain home with pay for 14 days, which is a measure we’re taking at sites around the world. Despite that instruction to stay home with pay, he came on site today, March 30, further putting the teams at risk.”

Smalls told Bloomberg that Amazon’s explanation of why he was fired is absolutely “ridiculous,” and he was punished for his activism in demanding a cleaner environment at work.

“I’m still going to continue to fight for those people inside of that building,” he said.

The union that represents Smalls and fellow workers at the warehouse claimed on Monday that Amazon is more concerned about profits than the health of its employees:

“All employers need to prioritize the health and safety of their workforce at this time. Unfortunately, Amazon appears to be prioritizing maximizing its enormous profits even over its employees’ safety – and this is unacceptable,” said Stuart Appelbaum, Retail, Wholesale, and Department Store Union (RWDSU) president.

And it wasn’t just Amazon employees striking on Monday, delivery workers at Instacart across the country walked off the job as they requested hazard pay amid the virus outbreak.

“This could be devastating.” A number of workers for two delivery service giants, Amazon and Instacart, are preparing to go on strike. They’re demanding added protections from the coronavirus and a boost in pay because of a massive increase in business, @SamBrockNBC reports. pic.twitter.com/6zQpodtCf1

With tens of millions of low-income workers becoming angry about their unsafe working conditions, it wouldn’t be surprising if the Amazon and Instacart strike on Monday leads to other forms of protest at other businesses.

“Bracing For The Worst Crash Of Their Careers”: A Quarter Of All Outstanding CMBS Debt Is On Verge Of Default