“The Biggest Decline Ever”: Goldman Now Sees US GDP Crashing 34% In Q2

“The Biggest Decline Ever”: Goldman Now Sees US GDP Crashing 34% In Q2

Just over a week ago, when we reported on the ongoing feud between Goldman and JPM to come up with the most terrifying GDP forecast for the US, and when we asked if a Second Great Depression has begun after Goldman’s chief economist Jan Hatzius slashed his Q2 GDP forecast from -5% to -24%, we said “we expect Goldman to take the machete to this analysis as well in the coming days, because if the US economy is indeed paralyzed for at least one quarter, then all of GDP could be lost.”

We were right, because early on Monday morning Goldman’s Haztius did just that, and in a report titled “The Sudden Stop: A Deeper Trough, A Bigger Rebound”, he writes that he is “making further significant adjustments to our GDP and employment estimates. We now forecast real GDP growth of -9% in Q1 and -34% in Q2 in qoq annualized terms (vs. -6% and -24% previously) and see the unemployment rate rising to 15% by midyear (vs. 9% previously).”

Detailing the assumptions behind his latest revision, Hatzius explains that he has increased his estimates of the peak hit to services consumption, manufacturing activity, and construction, “in light of new evidence on the severity of the hit across the different sectors” and now expects the level of GDP in April to be 13% below the January/February trend, as shown in Exhibit 1. “We assume that this drag then fades gradually by 10% each month in the services industry and by 12.5% in the manufacturing and construction industries.” 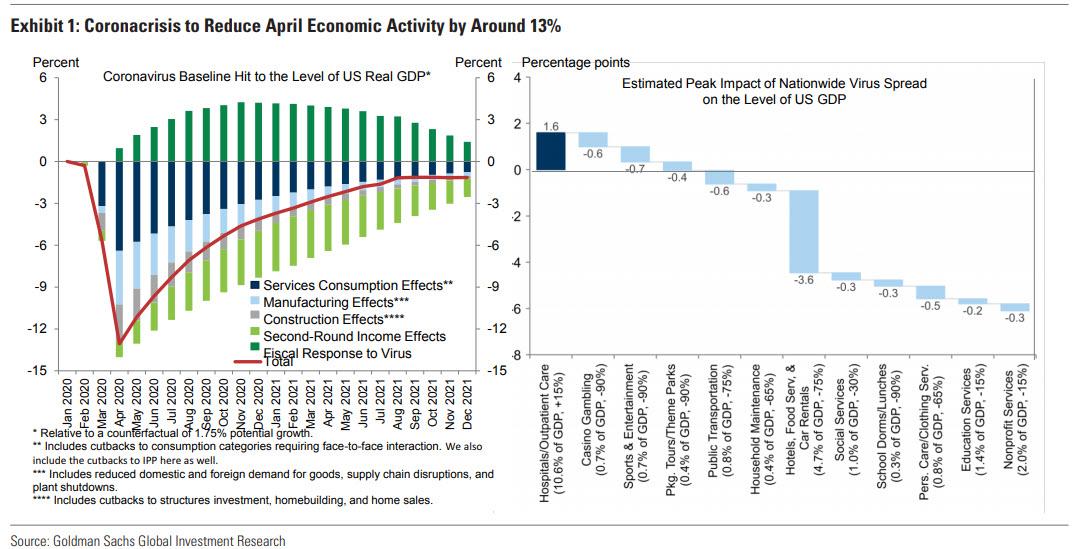 Ok but why do the reputable epidemiologists at Goldman believe the pandemic will fade in coming weeks? Here’s why (and yes, warm weather makes an appearance):

While the exact timing of the medical and economic recovery is highly uncertain and relapses are plausible, our assumption is that stronger lockdown and social distancing measures and perhaps some weather effects reduce new infections sharply over the next month. Combined with potential medical breakthroughs or adaptation by firms and consumers, this slowdown in new infections is likely to lead to a gradual economic recovery. The slow pace of recovery in our forecast even in 2021 allows for longer-lasting scarring effects on businesses and workers

And at the risk of repeating ourselves too, we will say that within a week, Goldman will cut its forecast again this time to -50% as we approach the moment when even banks admit the entire US economy has ground to a halt.

In any case, as Goldman explains further, its latest apocalyptic forecast reflects the net effect of two directionally offsetting changes:

The chart below translates the monthly path of the level of GDP shown in Exhibit 1 into a quarterly path of GDP growth, adding the impact of what Goldman believes will be second round effects and the fiscal impulse. For the first half of 2020, the bank now look for real GDP growth of -9% in Q1 and -34% in Q2, versus -6.3% and -24% previously. As Hatzius admits, the “Q2 forecast would represent a decline that is more than three times larger than the previous low in the history of the modern US GDP statistics (-10% in 1958 Q1).” Subsequently, the bank’s assumptions about the gradual fading of the virus drag imply a growth pace of just over 15% in the second half of 2020. In conclusion, Goldman’s forecast of full-year 2020 growth is now -6.2% on an annual average basis and -5.4% on a Q4/Q4 basis. 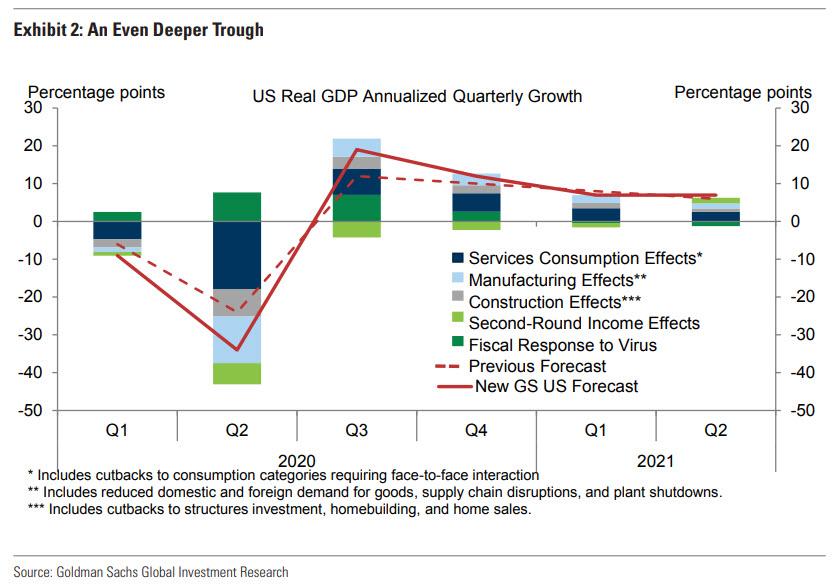 In other words, to preserve its traditional cheerful aura – even as it now forecasts a depression in the second quarter, Goldman has offset its future forecast with an even more vicious V-shaped recovery, and has upgraded its expectations for the recovery after midyear, now expecting a hilarious 19% annualized GDP gain in Q3 (vs. 12% previously), with the bank’s estimates implying that a bit more than half of the near-term output decline is made up by year-end and that real GDP falls 6.2% in 2020 on an annual-average basis (vs. 3.7% in our previous forecast).

Good luck with that.

In the Battle of Ideas, the Mises Institute Leads the Way