Since the passage of “tax cuts,” in late 2017, the surge in corporate share buybacks has become a point of much debate. I previously wrote that stock buybacks were setting records over the past couple of years. Jeffery Marcus of TP Analytics, recently confirmed the same:

“U.S. firms have been the biggest incremental buyer of stocks in each of the past four years, with their net purchases exceeding $2 trillion – Federal Reserve data on fund flows compiled by Goldman Sachs showed.”

“For much of the last decade, companies buying their own shares have accounted for all net purchases. The total amount of stock bought back by companies since the 2008 crisis even exceeds the Federal Reserve’s spending on buying bonds over the same period as part of quantitative easing. Both pushed up asset prices.”

In other words, between the Federal Reserve injecting a massive amount of liquidity into the financial markets, and corporations buying back their own shares, there have been effectively no other real buyers in the market.

Of course, as a corporation, you can’t spend all of your cash buying back shares, so with near-zero interest rates, debt became the most logical option. As shown below, much of the debt taken on by corporations was not used for mergers, acquisitions, or capital expenditures, but the funding of share repurchases and dividend issuance.

Unsurprisingly, when you are issuing that much debt for share repurchases, there is a correlation with asset prices.

“The explosion of corporate debt in recent years will become problematic during the next bear market. As the deterioration in asset prices increases, many companies will be unable to refinance their debt, or worse, forced to liquidate. With the current debt-to-GDP ratio at historic highs, it is unlikely this will end mildly.”

While that warning fell mostly on “dear ears,” the debt is now being bailed out by the Fed through every possible monetary program imaginable.

No, Buybacks Are Not Shareholder Friendly

Let’s clear something up. Buybacks are NOT shareholder-friendly.

The reason that companies spent billions on buybacks is to increase bottom-line earnings per share, which provides the “illusion” of increasing profitability to support higher share prices. Since revenue growth has remained extremely weak since the financial crisis, companies have become dependent on inflating earnings on a “per share” basis by reducing the denominator.

“As the chart below shows, while earnings per share have risen by over 270% since the beginning of 2009; revenue growth has barely eclipsed 60%.” 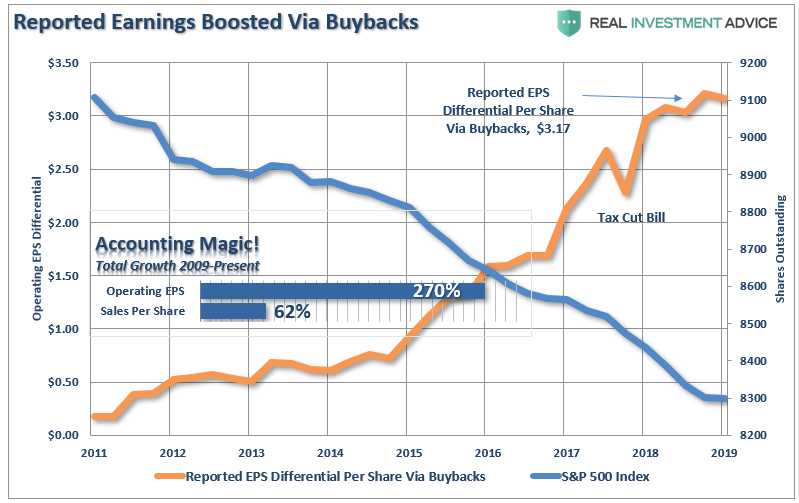 “Corporate executives give several reasons for stock buybacks but none of them has close to the explanatory power of this simple truth: Stock-based instruments make up the majority of their pay and in the short-term buybacks drive up stock prices.”

That statement was supported by a study from the Securities & Exchange Commission which found the same issues:

Not surprisingly, as corporate share buybacks are hitting record highs, so was corporate insider selling.

The misuse, and abuse, of share buybacks to manipulate earnings and reward insiders clearly became problematic.

Furthermore, share repurchases are the “least best” use of company’s liquid cash. Instead of using cash to expand production, increase sales, acquire competitors, make capital expenditures, or buy into new products or services, which could provide a long-term benefit. Instead, the cash was used for a one-time boost to earnings on a per-share basis.

Now, all the companies that spent years issuing debt, and burning their cash, to buy back debt are now begging the Government for a bailout.

“Perhaps no other industry illustrates the awkward position that corporate America finds itself in more than airlines. Major airlines spent $19 billion repurchasing their own shares over the last three years. Now, with the coronavirus virtually paralyzing the global travel industry, these companies are in deep financial trouble and looking to the federal government to bail them out.” – The New York Times

And who gets the privilege to PAY for those bailouts – YOU. The U.S. Taxpayer.

As we warned previously, when CEO’s become concerned about their business, the first thing they will do is begin to cut back, or eliminate, stock buyback programs. To wit:

“CEO’s make decisions on how they use their cash. If concerns of a recession persist, it is likely to push companies to become more conservative on the use of their cash, rather than continuing to repurchase shares. If that source of market liquidity fades, the market will have a much tougher time maintaining current levels, or going higher.”

Yes, companies are indeed reacting to the “coronavirus” pandemic currently. However, they were already in the process of cutting back on repurchases in 2019. As noted recently by Jeffery Marcus:

“Birinyi Associates, the leading firm that does research on buybacks, shows below that announced buybacks have declined significantly in 2019… ‘ it’s the biggest drop to start a year since 2009.’”

This is also because cash balances fell sharply, as corporations loaded-up on debt.

As the impact of the “economic shutdown” deepens, corporations are scrambling to protect their coffers. As noted on Friday, 75% of announced buyback programs have been cancelled.

Corporate buybacks have been the largest source of demand the last few years. 75% of announced buyback programs have been cancelled. So who is the incremental buyer with Boomers retiring in droves who hold the majority of wealth? pic.twitter.com/1IlRrruxDX

Greg’s tweet has a complete table, but here is the relevant chart. There is a tremendous amount of support being extracted.

Do not dismiss the data lightly.

The chart below is the S&P 500 Buyback Index versus the Total Return index. Following the financial crisis, as companies began to lever up their balance sheets to increase stock buybacks. There was a marked outperformance by those companies leading up to the crisis.

However, while corporate buybacks have accounted for the majority of net purchases of equities in the market, the benefit of pushing asset prices higher, outside of the brief moment in 2018 when tax cuts were implemented, allowing for repatriation of cash, performance has waned. Now, those companies which engaged in leveraging up their balance sheet to engage in repurchases shares are significantly underperforming the total return index.

Without that $4 trillion in stock buybacks, not to mention the $4 trillion in liquidity from the Federal Reserve, the stock market would not have been able to rise as much as it did over the last decade.

As I stated, CEO’s make decisions on how they use their cash. With the economy shut down, layoffs in the millions, and no clear visibility about the economic recovery post-pandemic, companies are going to become vastly more conservative on the use of their cash.

Given that source of market liquidity is now gone, the market will have a much tougher time maintaining current levels, much less going higher. As noted by the Financial Times:

“The rebound in equities has sparked optimism that we may be past the worst. However, we still believe it is too early to the call the bottom. From a positioning perspective we still believe there hasn’t been a full capitulation.

Hedge funds and risk-parity funds have reduced their equity exposure considerably. But institutional active funds and passive products have room for further outflows. The fiscal bill passed by the US government also allows individuals to withdraw up to $100k from their 401k, without penalty. We believe this could result in over $50bn of further outflows from the retail community. As well, over 50 companies in the S&P 500 have already suspended their share repurchase programs, which accounted for over 25% of buybacks in 2019. We believe the slowdown in buybacks could result in $300bn of lost inflows in the next two quarters.” – HSBC

The bear market isn’t over yet… not by a long shot.

Taking the Freedom Out of Freelancing