Last weekend we reported that one of Singapore’s biggest and most iconic – and extremely secretive – oil traders, Hin Leong Trading, whose website reported the company’s revenue surpassed $14 billion back in 2012, was on the verge of collapse as the company’s banks had frozen letters of credit for the firm – a death sentence for any commodity merchant – over its ability to repay debt; as a result, the firm appointed advisers this week to help negotiate with banks for more time to resolve its finances.

After pointing out the perplexing lack of high-profile blow-ups in the current commodity crush (as a reminder back in 2016 when oil dropped less than it has now, the Glencores and Trafiguras of the world were this close to collapse), we explained the critical nature of L/Cs…

Letters of credit are a critical financial backstop for commodity traders, used as way of financing critical short-term trade. A bank issues the so-called L/C on behalf of the buyer as a guarantee of payment to the seller. Once the goods have exchanged hands, the buyer repays the lender.

… and said that Hin Leong had “suddenly found itself without providers of L/Cs – for reasons still not exactly known – without which it is effectively paralyzed as it needs to front cash for any transactions, something no modern commodity merchant can afford to do.”

One week later we may have found the reason: according to a Bloomberg report, the son of the “legendary” founder of Hin Leong said the Singapore oil trader hid about $800 million in losses racked up in futures trading, suggesting a much bigger hole in the company’s finances than many expected, even if it explains why the banks scrambled to cut off the giant company’s funding.

Not only that but the Singapore commodity giant was also involved in the oldest trick in the commodity trader’s book: liquidation of pledged collateral to obtain critical funding. According to Evan Lim, the son of company founder Oon Kuin “OK” Lim, the company also sold some of the million of barrels of refined products it had used as collateral to secure loans from its banks, Bloomberg adds citing an April 17 email sent by the shipping affiliate of Hin Leong, notifying recipient parties of proposed moratorium proceedings.

As Bloomberg notes, the downfall of Hin Leong Trading, one of the biggest and most secretive forces in the world of physical fuel-oil trading, whose markets include crude oil, feedstock, middle distillates, petrochemicals, biofuel, mogas, naphtha, fuel oil, LPG, asphalt, base oil and lubricants, shows “the depth of the fallout from the dramatic drop in oil prices so far this year as a consequence of the Saudi-Russia price war and the coronavirus pandemic.”

It also suggests that we have finally found our first mega casualty from the coronacommoditycrisis (a long overdue offset to Pierre Andurand who managed to reverse just in time and to generate record profits in the past month having gone short oil): as a result of cooking its books and collateral shortfall, Hin Leong faces a significant shortfall between the oil stocks it held and the inventories pledged to its banks. That potentially means huge losses for the banks which provided the merchant with billions in loans as the collateral they thought they have as a guarantee isn’t there.

In what may be the most brutal case of cooking one’s books since Enron, the founder’s son, also known as Evan Lim, said he was unaware of the reason for losses suffered over some years and his father had instructed Hin Leong’s finance department to omit them from its financial statements; all this was disclosed in an email sent by Ocean Tankers Ltd., the group’s shipping arm which owns a fleet of more than 130 tankers, signed by the son and his sister Lim Huey Ching.

Completing the picture, just hours earlier, Hin Leong and Ocean Tankers both filed for court protection from creditors on Friday as the former struggles to repay its debts. Both companies are solely owned by the Lim family.

While Bloomberg focuses on the plight of the commodity trading giant, noting that “the trader’s financial distress has rocked the tightly-knit trading community in Singapore” and is “raising speculation that the privately-held company could be the latest casualty of the historic collapse in oil prices triggered by the coronavirus” the bigger question is whether this collapse will be systemic enough to send shockwaves among Singapore’s banks, some of the most levered in the world, and one of the world’s last remaining spot to launder money which is why so many Chinese have opened Singapore bank accounts in recent years.

The deception was simple: Hin Leong posted a positive equity of $4.56 billion and net profit of $78 million in the period ended October 31, according to the Bloomberg sources. But Hin Leong told its creditors this month that total liabilities reached $4.05 billion as of early April, while assets were just $714 million, leaving a hole of at least $3.34 billion.

The balance sheet of the company showed no equity at all as of April 9, 2020, and warned that “figures obtained from the company are subject to verification”.

What is even more bizarre, is that the company had used an otherwise reputable auditor, with Hin Leong Trading accounts for the financial year ending October 31, 2019 were audited by Deloitte & Touche LLP. The auditor didn’t flag any problems, according to people familiar with the matter. Meanwhile the banks too, were apparently unaware of the gross fraud taking place right under their noses, begging the question just what is the use of banker diligence?

That said, while auditors should have caught the accounting fraud, even they would have had trouble catching the company’s secret liquidation of pledged collateral. As noted above, Lim’s son said his father sold a substantial part of the company’s inventories even those used as collateral for banks loans. As a result, he said there was a large shortfall of oil inventories compared with the amount that had been pledged to secure the credit lines.

It also explains why as recently as last weekend, the banks had pulled their letters of credit.

Altogether, Hin Leong is said to owe almost $4 billion to more than 20 banks including HSBC, who will now scramble to figure out just how massive their loan losses are.

Meanwhile, the company which is not just a giant commodity trader and one of Asia’s largest suppliers of ship fuel, or bunkers, but co-owns oil storage unit Universal Terminal with PetroChina, and whose bunkering arm, Ocean Bunkering Services Ltd., was ranked the third-largest shipping fuel supplier in Singapore last year, is no more. Founder Lim Oon Kuin, known to many in the industry as OK Lim, will be resigning from all executive roles in Hin Leong, the Xihe Group and related companies as of April 17, Bloomberg sources reported. He will also step down as director and managing director of Ocean Tankers.

Meanwhile, the banks will be fighting with other creditors for whatever scraps are leftover: both Hin Leong and Ocean Tankers filed for protection from its creditors under Section 211B of Singapore’s Companies Act.

One unexpected consequence of the company’s sudden bankruptcy, is that with a record 160MM barrels of oil loaded up on tankers to ease the global commodity glut, Singapore may suddenly lose its place as the world’s tanker “parking lot.” While traditionally Singapore has had massive spare oil storage capacity which explains photos such as shits one… 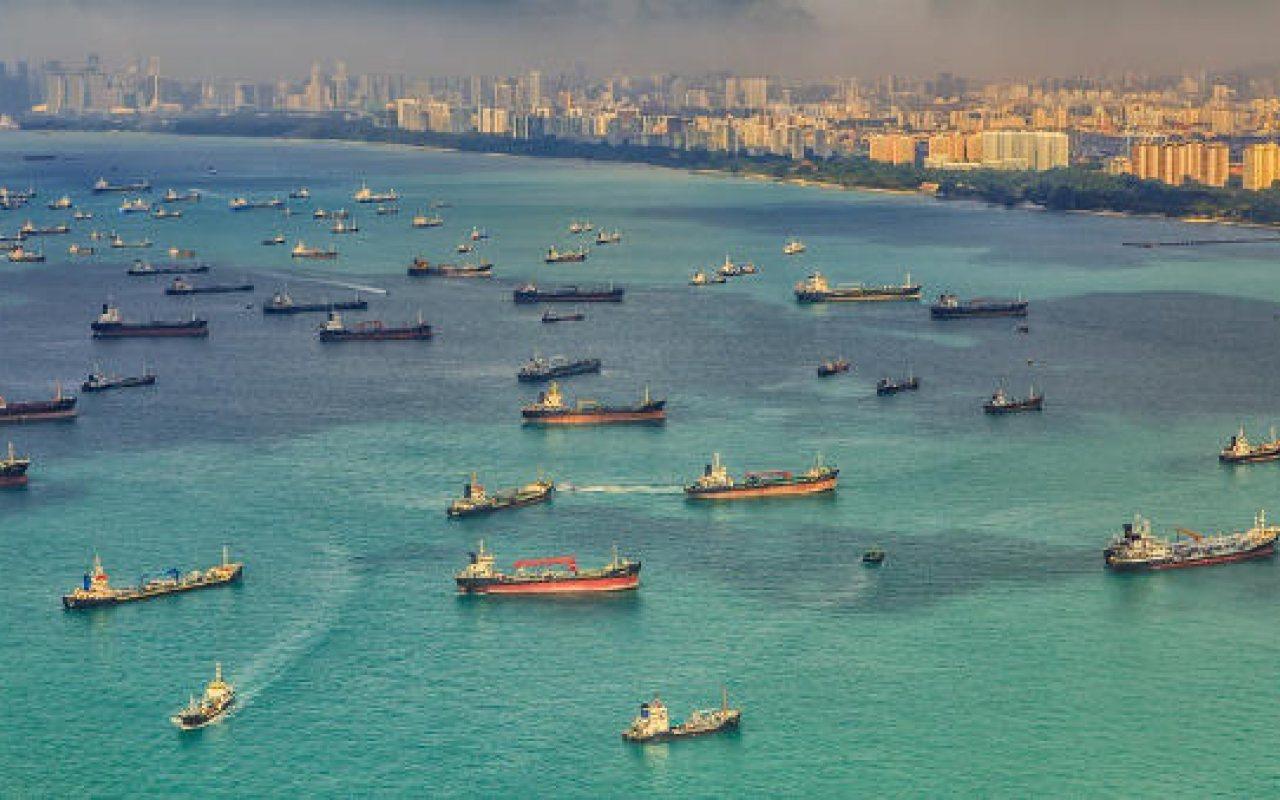 … it is Hin Leong’s Universal Terminal that has storage capacity of 2.33 million cubic meters and is the largest independent petroleum storage terminal in Singapore and one of the biggest independent storage facilities worldwide. But now that the company is bankrupt, the ability of tankers to store their holdings in the terminal is suddenly in limbo, which means that storing oil on sea may suddenly become far more complicated.

Last week, before we know the extent of the company’s financial debacle – and fraud – we concludes that “it is unclear what will happen to the Singapore commodity trading giant if it is unable to find banks that will backstop its operations.” Well, we now know – game over – which makes the second part of our forecast especially applicable: “should the firm become insolvent, the downstream cascade for companies in the Pacific Rim could be devastating.” We now wait to see if we were correct again.

Nomura Quant: “Any Market Rebound Should Be Faded”