Summary: Asia equities trade subdued into the weekend after a broadly flat lead from Wall Street and with US and European futures remaining under pressure and in the red most of the session. Nikkei -0.70%, KOSPI -0.89%, Hang Seng -0.60%, ASX200 +0.63% at the time of writing.

Risk looks set to continue to roll over in tandem with the real economy outlook, as collapsing economic data, failed drug trials and tech concerns fuel a more cautious mood. For the AUD that as a global risk proxy has bounced hard in recent weeks looking through the collapsing data towards the recovery, as risk rolls over the currency is primed for disappointment. Although FX moves in today’s Asia trading session are muted.

Gilead’s coronavirus drug Remdesivir has failed its first trial in China according to the Financial Times, contrary to documents released last week that sent US stocks surging higher on Friday. Overnight US equities pushed higher, with little regard for the addition 4.4mn jobless claims, and cratering PMIs in the US, EZ, Germany, France and the UK, something we touched on yesterday. But when news hit that the previously heralded antiviral was less cure more failure, those gains promptly reversed. The S&P 500 staged another reversal on the 50-day moving average and failed to close above, playing into to the theory that recent moves remain a bear market bounce driven by technicals as opposed to anything more meaningful. Without a vaccine or viable antiviral treatment imminent, the optimistic hopes for a V shaped snapback in activity and profits is fading fast. The re-opening process therefore being a phased transition and bounce back in activity being a slow return to normal levels. With the scale of job losses globally mounting, second order implications take centre stage and alongside a longer lasting drag on activity, the V-shaped recovery in employment can be ruled out. Job insecurity, lost savings and personal safety concerns dampen consumption as consumers choose to save more and spend less, preventing a one-quarter and done impact. Alongside plunging economic indicators it is likely that the consensus for earnings and equity fundamentals remains too optimistic at these levels, despite “QE Infinity” and fed intervention. Longer-term mounting debt levels, de-globalisation and receding international cooperation dull potential growth further. 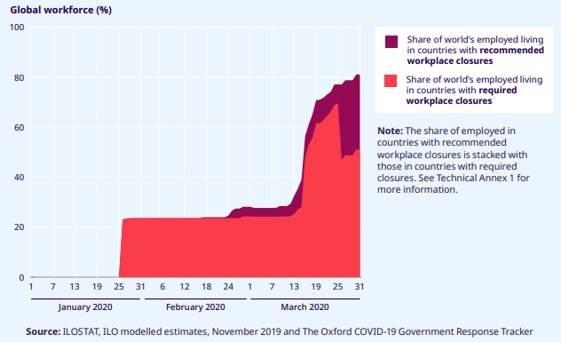 Google to Slash Marketing Budgets by Up to Half in a bid to reduce expenses, according to internal memos seen by CNBC. The stock is down in after hours, but the read through to other tech stocks is equally as important. As we have previously noted, for investors hiding in tech stocks, some revenues may be far more cyclical than consensus expects. Digital advertising budgets are being slashed across the board and Facebook, Alphabet, Twitter, Snapchat will not be immune. Decelerating advertising growth and digital ad spending is bad news given that Google and Facebook’s revenues are heavily tied to ad spending. Google in particular has more than a third of advertising revenues tied to sectors which have been hit hard by the impact of COVID-19 – Travel, Automotive and Financials. For an indicator of how much spending is actually being cut Barry Diller, chairman Expedia, speaking with CNBC earlier this month said that they typically spend $5bn on ads, but probably “won’t spend $1bn this year”.

Is the oil bailout pending? Treasury Secretary Steve Mnuchin said he’s considering creating a government lending program for U.S. oil companies. Sounds like it! The problem here, over supply has been a key component of the fallout in the oil market alongside demand destruction.If the market cannot be allowed to force production cuts due to bailout intervention then the problem of over supply remains, against a fundamental backdrop of demand that remains incredibly subdued. The only bull market is in intervention!

EUCO meeting leaves many questioning what is Europe if not for solidarity in times of crisis like the present. The positive – the failure to reach a conclusion on the long-term stimulus plan, is favourable to a bad plan. All or nothing? For more, Christopher Dembik has the analysis.

John Adams on the Purpose of Government