Why Assets Will Crash

Why Assets Will Crash

This is how it happens that boats that were once worth tens of thousands of dollars are set adrift by owners who can no longer afford to pay slip fees.

The increasing concentration of the ownership of wealth/assets in the top 10% has an under-appreciated consequence: when only the top 10% can afford to buy assets, that unleashes an almost karmic payback for the narrowing of ownership, a.k.a. soaring wealth and income inequality: assets crash.

Most of you are aware that the bottom 90% own very little other than their labor (tradeable only in full employment) and modest amounts of home equity that are highly vulnerable to a collapse of the housing bubble. (The same can be said of China’s middle class, only more so, as 75% of China’s household wealth is in real estate, more than double the percentage of wealth held in housing in U.S. households.) 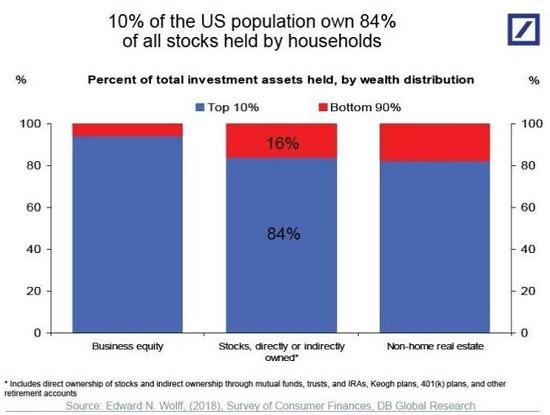 As the chart illustrates, the top 10% own 84% of all stocks, over 90% of all business equity and over 80% of all non-home real estate. The concentration of ownership of assets such as vintage autos, collectibles, art, pleasure craft and second homes in the top 10% is likely even greater. 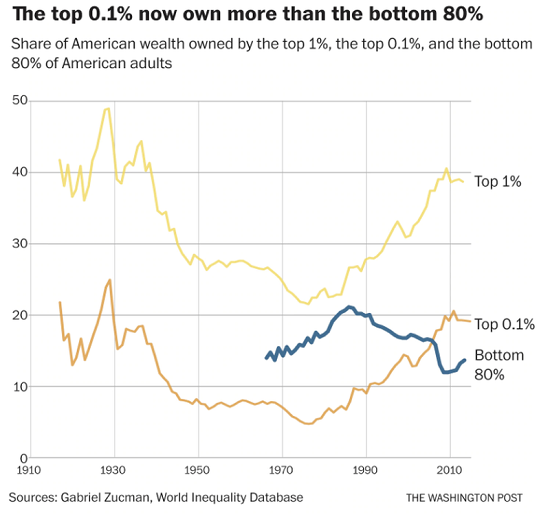 This means the pool of potential buyers is relatively small, even if we include global wealth owners.

Since price is set on the margins, and assets like houses are illiquid, then we can anticipate all the markets for assets owned solely by the wealthy to go bidless–yachts, collectibles, vacation real estate–because the pool of buyers is small, and if that pool gets cautious due to a drop in net worth/unearned income, there won’t be any buyers except at the margins, at incredible discounts.

Since few of the current bubble-era asset valuations are supported by actual income fundamentals, then the sales price boils down to a very small number of potential buyers and what they’re willing to pay.

Houses have a value based on rent, of course, but rents will drop very quickly for the same reason: prices are set on the margins. The most desperate landlords will drop rents and re-set the rental market from the margins. If demand plummets (which it will as people can no longer afford rents in hot urban markets once they lose their jobs), then vacancies will soar and rents will crash as a few desperate landlords will take $1200/month instead of $2500/month.

Due to the multi-year building boom of multi-family buildings in hot job markets (which inevitably leads to an over-supply once the boom ends), there are now hundreds of vacancies where there were once only a few dozen, and thousands where there were previously only hundreds.

As millions of wait staff, bartenders, etc. who made good money in tips find their jobs have vanished, all the urban hotspots will see mass out-migration: Seattle, Portland, the S.F. Bay Area, L.A., NYC, Denver, etc. as demand for rentals will evaporate and rents will be set on the margins by the most desperate landlords. Everyone holding out for the previous bubble-era rent will have $0 income as their units are vacant.

Tech start-ups and Unicorns are melting like ice cubes in Death Valley, and tech-sector layoffs are already in the tens of thousands. This wave of highly paid techies losing their jobs will become a tsunami, further reducing the pool of people who can afford rents of $2,500 to $3,000 for a studio or one-bedroom apartment.)

The concentration of ownership generates a self-reinforcing feedback that further depresses prices: since the top 10% own most of the assets of the nation, they are most prone to a reversal of “the wealth effect.” As their assets soared in value, the top 10% felt wealthier and more confident in future gains, enabling them to borrow and spend freely on second homes, pleasure craft, new vehicles, collectibles, luxury travel, etc.

Once even one class of assets plummets in value–for example, the recent decline in the stock market– the wealth effect reverses and the top 10% feel poorer and less confident about future gains, and thus less enthused about borrowing and spending. The demand for other costly assets quickly evaporates, further reducing the wealth of the “ownership class,” which further reduces their desire and ability to buy bubble-era assets.

The high-priced assets owned by the top 10% will be the assets least in demand due to their high cost and potential for enormous losses: nothing loses value faster in a recession that narrowly owned assets such as vintage cars, art, vacation homes, yachts, etc.

Once assets start sliding in value, the reverse wealth effect quickly dries up demand for all asset classes with narrow ownership. Since these assets are illiquid–that is, the market for them is thin, with buyers few and far between–the prices are set by a very shallow pool of buyers and desperate sellers.

Consider a pleasure craft that retails new for $120,000. In the boom era of rising stocks and housing, a used boat might fetch $65,000. But as the wealth of the small pool of households able to buy and maintain a costly craft evaporates, the number of qualified buyers evaporates, too.

The seller might be aghast by an offer of $35,000 and reject it angrily. Six months later, he’s praying someone will take it off his hands for $15,000, and in another six months, he’ll accept $500 just to get out from underneath the insurance, slip-rental and licencing fees.

This is how it happens that boats that were once worth tens of thousands of dollars are set adrift by owners who can no longer afford to pay slip fees, and vacation homes are abandoned and auctioned off for overdue property taxes: the market for these luxuries dries up and blows away, i.e. goes bidless–there are no buyers at any price.

Once housing and real estate valuations fall, that will trigger a decline in the value of all other costly, narrowly owned assets, which will reinforce the reverse wealth effect.

This is the systemic payback for concentrating ownership of assets in the hands of the few: when their bubble-era priced assets plummet in value, the bottom falls out of all assets with narrow ownership. The price of superfluous assets such as boats, vintage cars, collectibles, art and vacation homes can quickly fall to a fraction of bubble-era valuations, destroying much of what was always fictional capital.

(For more on the intrinsic fragility of a system that concentrates ownership in the hands of the few, please read Our Inevitable Collapse: We Can’t Save a Fragile Economy With Bailouts That Increase Fragility May 1, 2020.)

The Federal Reserve reckons it can “save” the bubble-era valuations of junk bonds by being the “buyer of last resort,” but it will end up being the “only buyer,” effectively making the system even more fragile and prone to collapse.

The public will eventually have to decide if the nation’s central bank should be bailing out assets owned by the financial elite while the upper-middle class watches its assets collapse in value.