Only 40% Of Americans Plan To Grill This Memorial Day; Will Host Smaller Crowds, Less Food

Only 40% Of Americans Plan To Grill This Memorial Day; Will Host Smaller Crowds, Less Food

In a world suddenly flooded with high-frequency, real-time economic indicators, Bank of America has launched the “BofA Summer BBQ tracker”, a gauge of consumer food/beverage consumption plans for major US grilling holidays; the bank will conduct the survey over the summer coinciding with major events such as Memorial Day, Fathers’ Day, the 4th of July and Labor Day.

The extended Memorial Day Weekend represents the 2nd largest grilling holiday in the US where an estimated 56% of Americans plan to cookout/BBQ each year according to the Hearth, Patio & Barbecue Association. However, according to the BofA survey of 1,000 US consumers, that number is likely to be much lower this year in light of COVID-19/social distancing occurring across the US with only 40% of consumers planning to grill this MDW. Further, the outlook for this summer remains gloomy as 50% of consumers not planning to host/attend a cookout this MDW indicated no plans to attend any form of gathering this summer.

For those consumers who do plan on getting together this MDW, expect social distancing to play a key role with nearly 70% of respondents indicating they expect a crowd of 10 people or fewer, with another 25% expecting crowds of between 10 and 25. Given smaller crowds, consumers are expecting to buy less than they have in prior years with roughly 25-30% indicating lower food/beverage purchases for their events.

Below are the key takeaways from the BofA survey:

Before we get into the specifics of the survey results, here are some Memorial Day fast facts:

With that in mind, here are the findings from the BofA MDW BBQ Survey:

Of the 1,000 survey respondents, only 40% plan to host/attend a barbecue/cookout this MDW. This compares to a normal year where roughly 56% of consumers plan to grill on MDW (2nd only to the 4th of July) according to the Hearth, Patio & Barbecue Association. On a regional basis, those in the Mid-Atlantic (NY, NJ, PA) and East South Central (AL, KY, MS, TN) are most likely to barbecue. This is somewhat surprising given stricter social distancing orders enacted in NY/NJ, however recent government actions to re-open parts of the state for MDW and socially-distanced “front-yard cookouts” may be driving some of the planned activity.

For respondents who answered they did not plan on attending, the overwhelming majority (70%) indicated they were worried about COVID-19 spread if they were around too many people. The forward outlook does not appear much better as 51% of respondents indicated that they don’t plan to attend BBQ/cookouts this summer at all. However, as social distancing restrictions ease this number could be revised down in future versions of this survey.

#3) Party sizes to be smaller with less food/bevs

Consumers who do plan on getting together this MDW are expecting social distancing to play a key role with nearly 70% of respondents indicating they expect a crowd of 10 people or fewer, with another 25% expecting crowds of between 10 and 25. At the same time, given smaller crowds, consumers are expecting to buy less food than they have in prior years with roughly 25-30% indicating lower food/beverage purchases 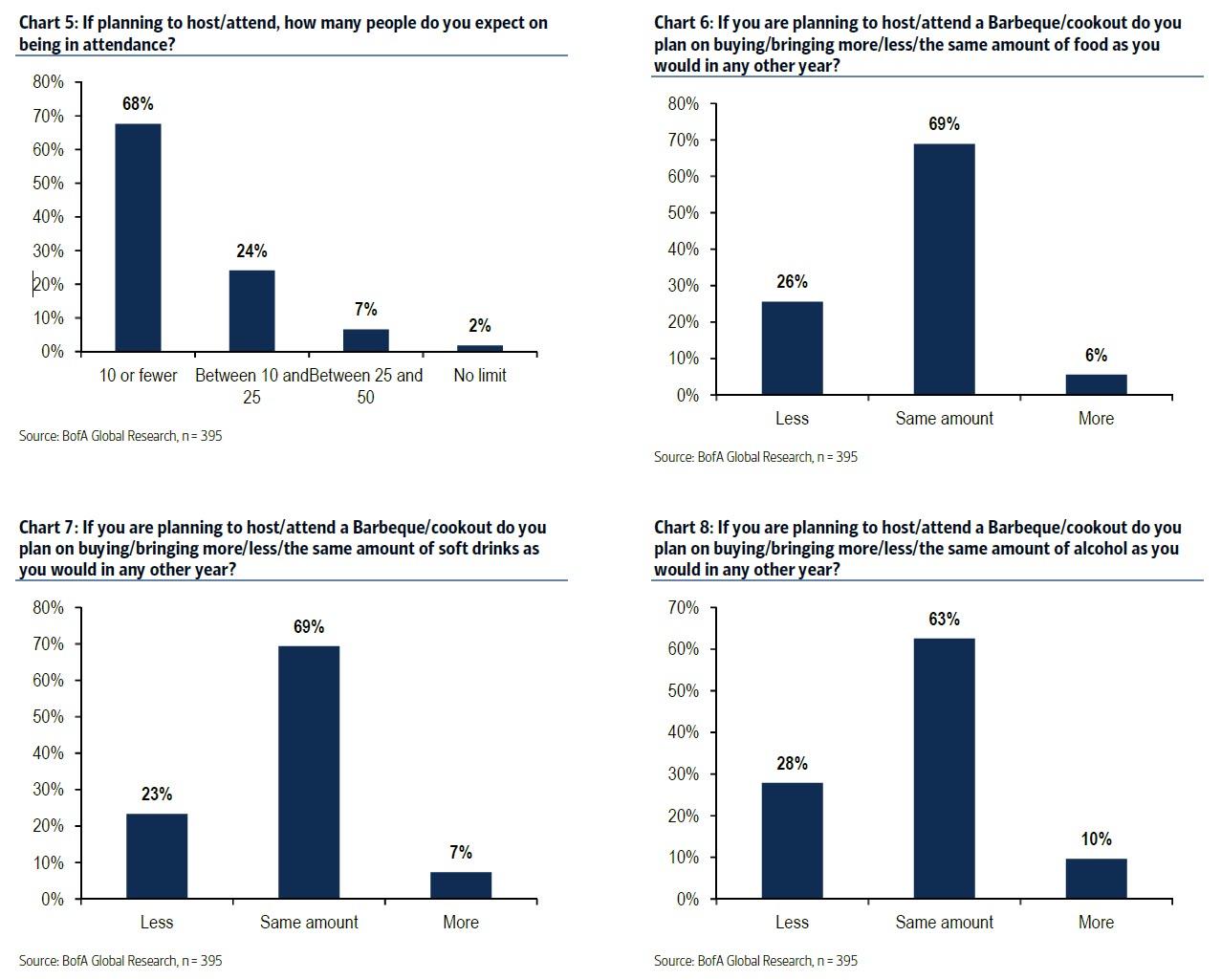 #4) Burgers/Hot Dogs reign supreme if you can find them

Most common items expected to be served include hamburgers (75%), hot dogs/sausages (71%), chips (71%) and domestic beers (47%). However, several consumers expressed concern around being able to find hamburgers as well as hot dogs and buns at grocery stores (Table 1). The situation should improve this week as slaughter rates at pork/beef packing plants improved last week and are back to ~75% of pre-COVID levels. 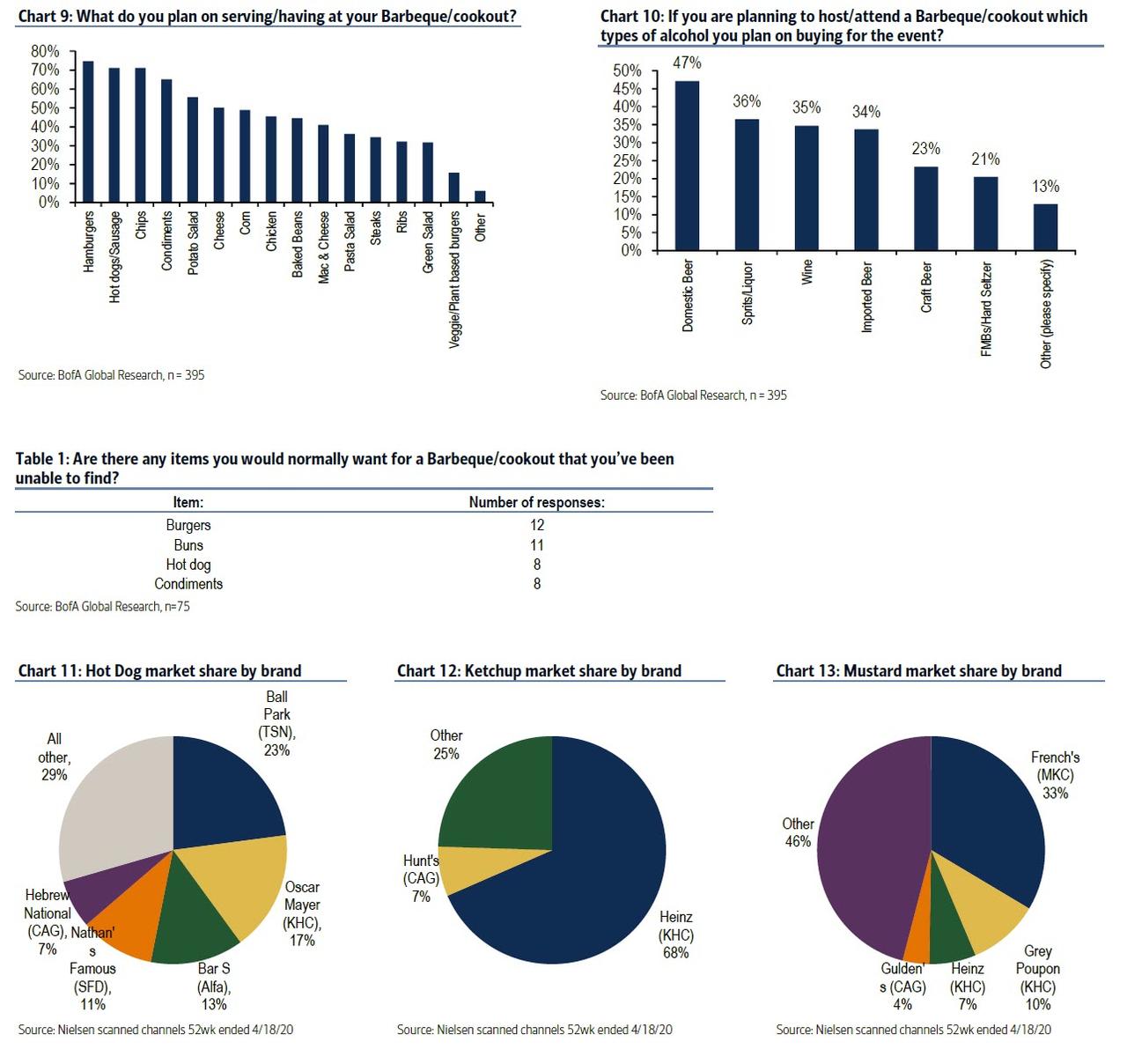 For those planning on hosting or attending a cookout this Memorial Day around 15-20% expressed interest in having new products at their barbeque. Consumers plan on having “hard seltzers”, condiments like “MayoChup” and “plant-based burgers.” As consumers spend more time eating at home they will be more willing to experiment with new items. 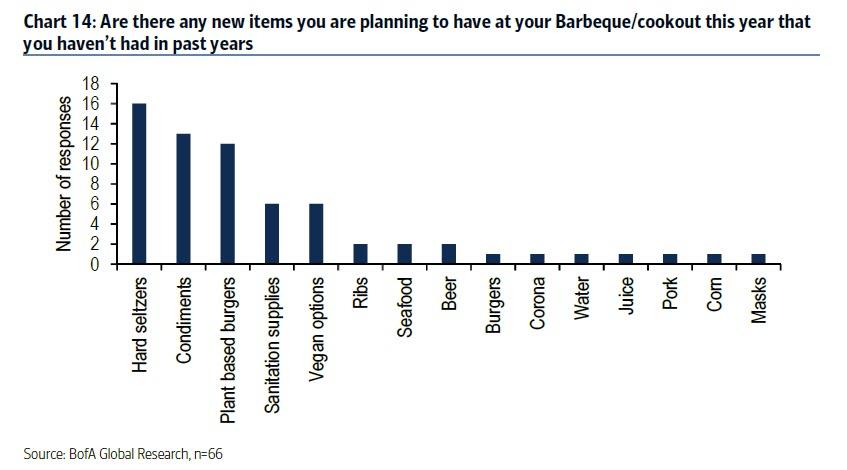 Home improvement retailers have benefited in recent months from homeowners being stuck at home and taking on DIY home improvement projects, including cooking rather than going out for meals. Some of this benefit has included increased demand for grills for preparing personal/family meals, as 20% of survey respondents have bought a grill in the last two months. Given that the average useful life of a grill is about 5-15 years, this rate does appear to exceed normal replacement demand. However, about an equal number of respondents expect to grill less this summer as those that plan to grill more, so the impact of smaller & fewer gatherings may offset the rise of personal grilling.

The High Cost of Farm Subsidies

America Is A Technocracy, Not A Democracy

Goodbye Dollar, It Was Nice Knowing You!