And then it happened. A vicious sell off seemingly out of the blue putting a sudden end to the steepest rally ever with many indices and individual stocks getting hammered seeing sizable declines just as Nasdaq was making new all time highs and $SPX was going green for the year setting up markets for an epic battle of control in the days and weeks to come.

Markets were clearly extended on many fronts and a correction was due. But nothing is normal about these liquidity soaked markets. The rally was historic with a 47.5% nearly vertical ascent following the March lows and the disconnect of valuations behind the size of the real economy has taken on historic levels. Markets reached nearly 152% market cap to GDP before the snapback as valuations suddenly dropped to 141.8% by Thursday’s market close. And it happened fast as little support was built in a market that so heavily reliant on open overnight gap ups on the way up.

On Monday I made the case for Crash 2 highlighting narrowing patterns in the $VIX and $SPX that suggested another volatility event was shaping up and just 3 days later the $VIX wasted no time spiking to the 44 level filling its open gap in that area:

In short: A breakout in volatility and a violent breakdown in the rally trend. And suddenly some of the open gaps I highlighted on Monday started seeing some filling:

In process markets produced what in technical terms is called an island reversal with price left hanging isolated, even on the almighty tech sector:

Setting up for a key battle zone for control and I gave a quick snapshot readout on the levels last night:

In episode 6 of Straight Talk Guy Adami, Dan Nathan and I discuss this week’s market action, its implications, we discuss $AAPL, the banks, the Fed, the disconnect between the political cheerleading and the economic and social reality on the ground, keeping it real:

My quick technical take on the week: $SPX pic.twitter.com/nr7DO90Beh

The Fed now having set the expectations that rates will remain at least at zero (while still publicly denying negative rates are coming) has inadvertently revealed a major gap in narrative: That of a V shaped recovery presumed by markets and a Fed signaling with zero rates through 2022 that there is no V shaped recovery in the offing, rather a protracted high unemployment environment that is entirely inconsistent with market valuations north of 150% market cap to GDP.

Somewhere in between these narratives is a truth and that’s a truth markets have to negotiate.

As this rally has been driven by record artificial liquidity and has been again entirely dependent on multiple expansion alone it should also be noted that this rally stopped during the same week that the Fed’s incremental expansion of its balance sheet shriveled to nearly zero with its slowest expansion since the March 23rd lows:

Fed expands balance sheet by only $3.7B in the past week and markets completely fall apart. pic.twitter.com/43v5CIXm9S

This week’s aggressive flush lower has created short term oversold conditions and next week is OPEX week which traditionally has a bullish slant, but be aware, unless markets can repair the island reversal gaps and resume the rally toward the open 3300 gap on $SPX, these reversals stand and they, along with a bearish engulfing weekly candle and trend breaks on the charts has bearish connotations suggesting that rallies may end up getting sold and lower prices are to come.

I am reminded of what I wrote on March 23rd, the day of the lows: “The 1929 redux tells us a big rally will come and this rally will be awe inspiring, it’ll produce technical reconnects in a market that is now widely disconnected to the downside and it will bring back optimism. But then the historical script suggests lower highs to come as the world is then confronted with the consequences of the costs of extinguishing this fire. The bill comes due as the world will be settled with even more debt, but now a much higher unemployment rate, poorer consumers, and companies focused on margin efficiencies.”

The consequences are already staring us in the face:

Lay off announcements are continuing, corporate debt is higher than ever approaching 50% of GDP:

..while earnings have done nothing for years and are now declining:

With the share of zombie companies, now increasingly held afloat by the Fed, is ever increasing:

Want to take this all to be the recipe for a new structural bull market be my guest. From my perch this historic market cap to GDP extension fueled by nothing but artificial liquidity and now accompanied by speculative retail FOMO behavior still bears the historical footprint of an epic bear market rally. And if that is so the forces of intervention and cheerleading with find themselves greatly challenged by the forces of reality in the months to come.

And this is what our Straight Talk series is all about: Keeping taps on reality in a world keen on wanting to avoid it. 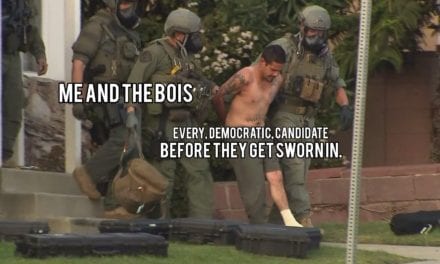 The Complicated Truth About the Boogaloo Movement