The Washington Post is trying to get ahead of what Rudy Giuliani says are “far more damaging” tapes of 2016 phone calls between former Vice President Joe Biden and former Ukrainian President Petro Poroshenko. 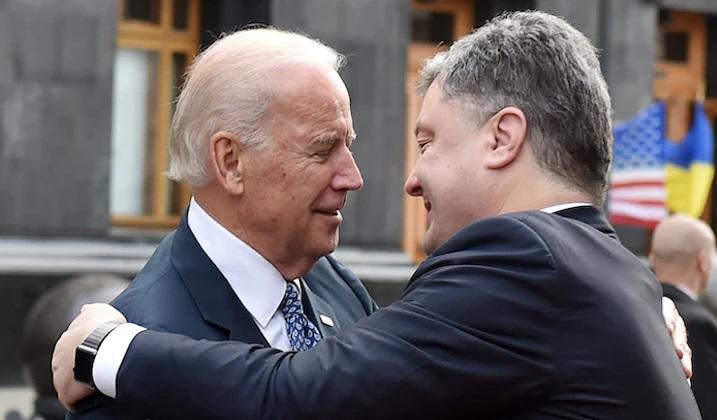 To review, Biden conditioned a $1 billion US loan guarantee on the firing of Ukraine’s chief prosecutor, who was leading a wide-ranging investigation into Burisma – a Ukrainian energy company which hired Hunter Biden to sit on its board.

In May, Ukrainian MP Andrii Derkach released recordings of Biden and Poroshenko which explicitly detail the quid-pro-quo arrangement to fire the prosecutor, Victor Shokin (which Biden already admitted to).

Biden’s campaign says the tapes are part of a ‘conspiracy theory to smear him’ – while Poroshenko claims they are fabricated.

In one of the May tapes, Poroshenko reports back with “positive news” that Shokin – “despite of the fact that we didn’t have any corruption charges” – had been fired.

Last week, more recordings of Biden and Poroshenko were published to the YouTube channel, “NABU Leaks,” where the two can be heard discussing ongoing efforts by the United States to help Ukraine with various matters.

And according to a Tuesday report in the Washington Post, more tapes are coming.

Both Giuliani and Lev Parnas, a Ukrainian-American businessman who served as his fixer in Ukraine, confirmed that they sought tapes of Biden last year. Giuliani said he received assistance in his pursuit from a source within the State Department, who he claimed pointed him to the dates of certain conversations between Biden and Poroshenko by accessing an official U.S. government archive.

Giuliani told The Washington Post that he did not know the recently released recordings were coming before they were posted online last month. But in a recent interview with OAN, the former New York mayor claimed to be aware of other tapes that were “far more damaging,” saying, “I would hope that those tapes are put out also.” –Washington Post

The Post calls the clips “heavily edited” and paints Derkach, the Ukrainian MP, as essentially a proxy for Vladimir Putin. They also suggest that “the efforts to promote the recordings in Ukraine and the United States — and pledges by other Trump allies to release more in the coming months — suggest a new push by foreign forces to sway American voters in the run-up to the 2020 election,” and claim that the NABU leaks “further illustrate Trump’s willingness to benefit from foreign intervention in U.S. elections,” despite offering no evidence that Trump is involved in the leaks.

Well-worn playbooks aside, the Biden campaign had this to say of the audio clips:

“All the president’s men, both within our country and outside of it, have been constantly trafficking in objectively false, malicious conspiracy theories targeting Joe Biden since before he even entered the race. And their efforts have invariably fallen apart — because the American people know Joe Biden, his character, and his values.”

Derkach, meanwhile, said of the attempts to smear him as a Russian operative “There is not a single confirmed or reliable fact of my illegal activity or wrongful connections.”

The hunt by the president’s allies for the Biden tapes and their subsequent release have echoes of the 2016 campaign, when Trump publicly asked Russia to find emails of his Democratic rival Hillary Clinton. Trump later said the comment was a joke, even as GOP operatives mounted a serious but unsuccessful operation to obtain her emails from hackers claiming to have them.

And here it is:

U.S. intelligence officials have warned that Russia could reprise its efforts to influence the race for the White House again this year.

And they keep going with the Russia angle, to the surprise of nobody:

Michael Carpenter, a Biden foreign policy adviser and former senior Defense Department official, called the tape snippets that Derkach is releasing “a KGB-style disinformation operation tied to pro-Russian forces in Ukraine whose chief aim is to make deceptive noise in the U.S. election campaign to advance the interests of their oligarchic backers, the Kremlin, and the faltering Trump campaign.”

The report also names non Russians (who might be secret Russians) who could be behind the tapes, including former Ukrainian Diplomat Andrii Telizhenko, and Ukrainian gas tycoon and former lawmaker Oleksandr Onyshchenko.

According to Telizhenko “This summer there will be more release of conversations, with full transcripts,” adding “I’m going to release everything all together when the time is right.”

Can we say “deadman’s switch?”