Maxwell’s accusers weighed in during her bail hearing, with one Jane Doe insisting “If she [Maxwell] is out, I need to be protected,” adding “Her sole purpose is that of self-preservation.”

Another accuser, Annie Farmer, pushed for no bail, claiming that Ghislaine is a “sexual predator” who never showed any remorse.

Arguing for bail, Maxwell’s attorney Cohen argued that it’s “not realistic” to assume they can prepare for trial with Maxwell in custody during the COVID-19 pandemic.

Instead, he argued that Maxwell should be released with strict conditions, adding that she’s not Epstein, “she’s not the monster” she’s made out to be.

Her defense has argued that she serve her pretrial detention in a luxury hotel in Manhattan.

BREAKING: Ghislaine Maxwell proposes that she serve her pretrial detention in a luxury Manhattan hotel.

Ghislaine Maxwell has pleaded not guilty to charges in connection with Jeffrey Epstein’s alleged criminal sex-trafficking of minors.

In a remote appearance from a New York detention facility on Tuesday, the UK socialite was dressed in a brown shirt and her hair tied back into a bun as she waived her right to be physically present, according to the Daily Mail.

The 58-year-old would be confined to a home in the New York area, surrender all her travel documents and be subject to GPS monitoring.

She faces up to 35 years in prison if found guilty of the charges, as prosecutors argue that along with her three passports, connections to some of the world’s most powerful people and her own fortune – Maxwell has every incentive to try and flee. -Daily Mail

Ghislaine Maxwell – who’s facing six charges in New York over her alleged role in Jeffrey Epstein’s pedophile sex-trafficking ring, is also under investigation in the US Virgin Islands.

The revelation comes in a July 10 filing to intervene in a lawsuit Maxwell filed against Epstein’s estate seeking reimbursement for legal fees, and claiming that Epstein had repeatedly promised to support her financially, according to The Sun. 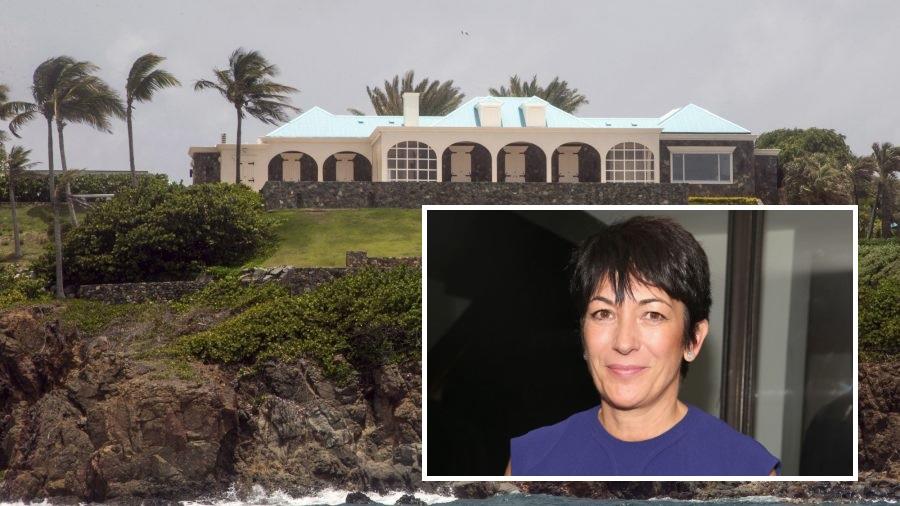 Epstein infamously owned Little St. James island, dubbed ‘pedo island’ over accusations that he would fly underage girls there to fulfill his sexual desires and those of his associates. Famous guests reportedly include Bill Clinton, Prince Andrew, Stephen Hawking, Les Wexner and others.

One accuser, Chaunte Davies, says she was raped by Epstein over the course of several years before finally parting ways with him in 2005.

Now 40, Chaunte says the ex-Wall Street banker performed a sex act on himself during their first massage session – and that she was “manipulated” into staying in their circle by Maxwell. “Within weeks she was jetting round the world on his private jet and on to his island of Little Saint James,” according to the report.

“The government’s need to intervene is further fueled by Maxwell’s inappropriate use of the Virgin Islands courts to seek payment and reimbursement from the Epstein criminal enterprise, while she circumvents the service of process of government subpoenas related to her involvement in that criminal enterprise,” reads the filing.

Island officials have also subpoenaed Maxwell to try and compel her to appear before a local court – a bid which may prove difficult considering her current status as an inmate awaiting trial at a New York detention center following her July 2 arrest in New Hampshire. Maxwell has evaded Virgin Islands officials since March.

Maxwell is set to appear for a virtual bail and arraignment hearing on Tuesday. Her legal team has requested that she be freed on $5 million bail, arguing that she’s not a flight risk and may catch coronavirus in jail. Prosecutors for the US Justice Department strongly disagreed, pointing to Maxwell’s opaque finances and global contacts that pose a significant flight risk.

“She has demonstrated her ability to evade detection, and the victims of the defendant’s crimes seek her detention,” said DOJ prosecutors in their filing. “Because there is no set of conditions short of incarceration that can reasonably assure the defendant’s appearance, the government urges the Court to detain her.”

Mises and the Renaissance of Austrian Economics

On The Edge Of Another Historic Inversion: Retail Traders Set To Surpass 50% Of All Call Buying