Update (1100ET): Stocks shot into the green earlier after the release of Phase 1/2 trial data in the Lancet earlier showed that one of the most hyped up vaccine candidates appeared to be safe for human consumption.

However, as that rally fades and both AstraZeneca shares and the broader market slump back into the red, analysts are pointing to one important detail of the study results: the fact that responses were strongest after a booster dose.

If a patient needs two doses of a vaccine for it to be effective, than it will take twice as long to produce and distribute to the population.

“We saw the strongest immune response in the 10 participants who received two doses of the vaccine, indicating that this might be a good strategy for vaccination,” Professor Pollard said.

Read more on that here.

In other news, Florida and New York kicked off Monday’s big numbers. On Monday, Florida reported 10,508 new cases and 92 newly reported deaths, marking the sixth straight day with more than 10k new cases. Of all the tests counted over the past 24 hours, 14.74% of them came back positive, which is still well below Florida’s peak north of 20% (all these COVID-19 data are reported with a 24 hour delay).

The new deaths reported Monday pushed Florida’s total north of 5,000 to 5,072. The state has also counted 360,394 infections, still rough;y 70k shy of New York’s 411k+ total. New York has also reported more than 30k deaths. Monday’s data follow a new weekly record for cases, deaths and tests in Florida that was cemented on Sunday. Statewide, 740 virus deaths were reported from Sunday to Sunday, compared with 511 the prior week.

As Florida and Texas draw nearer to NY’s COVID-19 case total, the two states have logged only 1/10th the death rate of NY.

How come we haven’t seen more reporting on what Fla and Texas did to keep the mortality rate low? We suspect it has something to do with the fact that they didn’t explicitly ask hospitals to send COVID-19 positive patients back to nursing homes and other long-term care facilities.

Meanwhile, NYC entered ‘Phase 4’ reopening on Monday with Gov Andrew Cuomo warning that he wouldn’t hesitate to roll back the reopening if cases start to climb once again. Any rule-breaking “has to stop” Cuomo said, as he threatened to revive the lockdown if compliance doesn’t improve.

There are facts and then there are myths.

If you are in your 20s you can get sick.

And you can make other people sick.

You’re not a superhero. But you could become a superspreader.

Today’s update on the numbers:

While Sweden’s high (relatively speaking) mortality rate figures heavily into these criticisms, the truth is Sweden has reported fewer deaths per million than several of the worst-hit countries in Western Europe, including the UK, Spain, Italy and Belgium, all of which adopted strict lockdowns to combat the virus.

Goldman once claimed that Sweden’s success was largely attributable to cultural factors, like the fact that most Swedes obeyed the government’s social distancing guidance.

CBS News traveled to Stockholm recently and found that, despite the worrying statistics, most Swedes still back the public health agency’s approach.

“I think the people are taking their responsibility to social distance, so I am fine,” said Stockholm resident Mia Soderberg.  “I am glad…because I think people are in better shape mentally, because we’ve been able to go out.”

Though, to be sure, Sweden’s neighbors have punished Swedes by imposing travel bans that prohibit Swedes from crossing over the border.

But while herd immunity remains a ways off, according to Sweden’s top virologist, the country’s efforts to safeguard nursing homes and other long-term care facilities have caused deaths to drop precipitously. 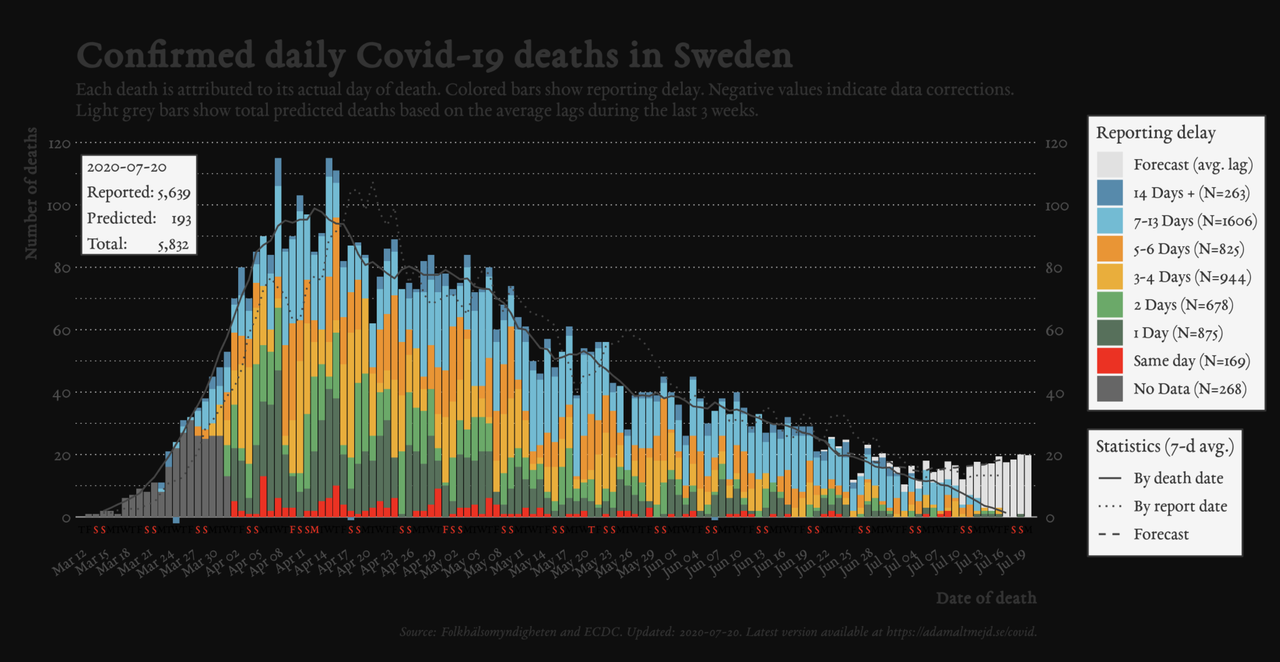 Although Sweden never locked down, and never mandated masks, the country is for the most part finished with the outbreak. Deaths and new cases have dwindled, as critics of the country’s approach continue to warn about the possibility of a dangerous second wave. Although the country is reporting daily deaths in the teens, CBS News warned that in a month or so, when the summer ends, millions of Swedes will head back inside, triggering the start of a whole new wave of the pandemic. 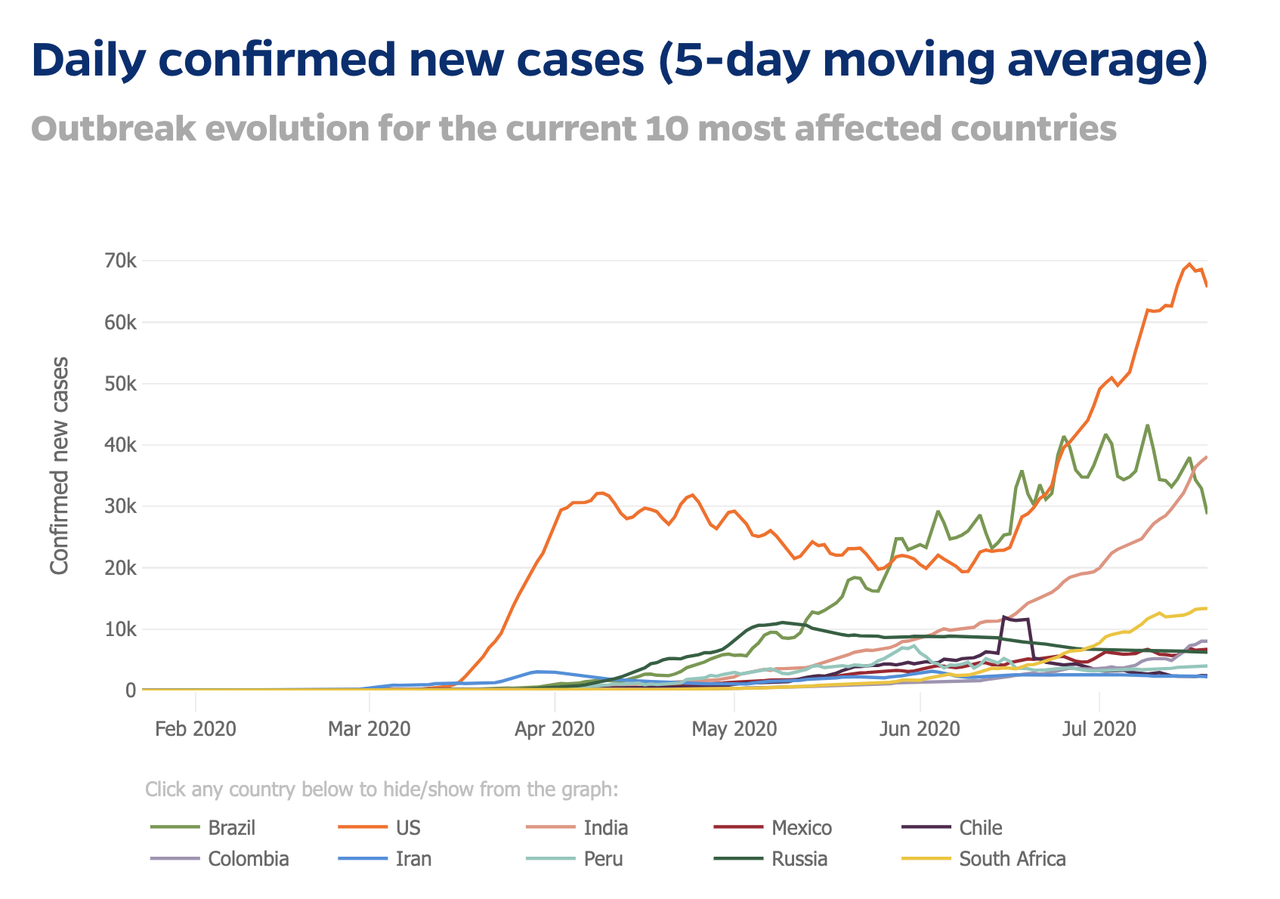 The world saw two consecutive daily record tallies over the weekend, as the pandemic continues to intensify in the US, India, Brazil and elsewhere. 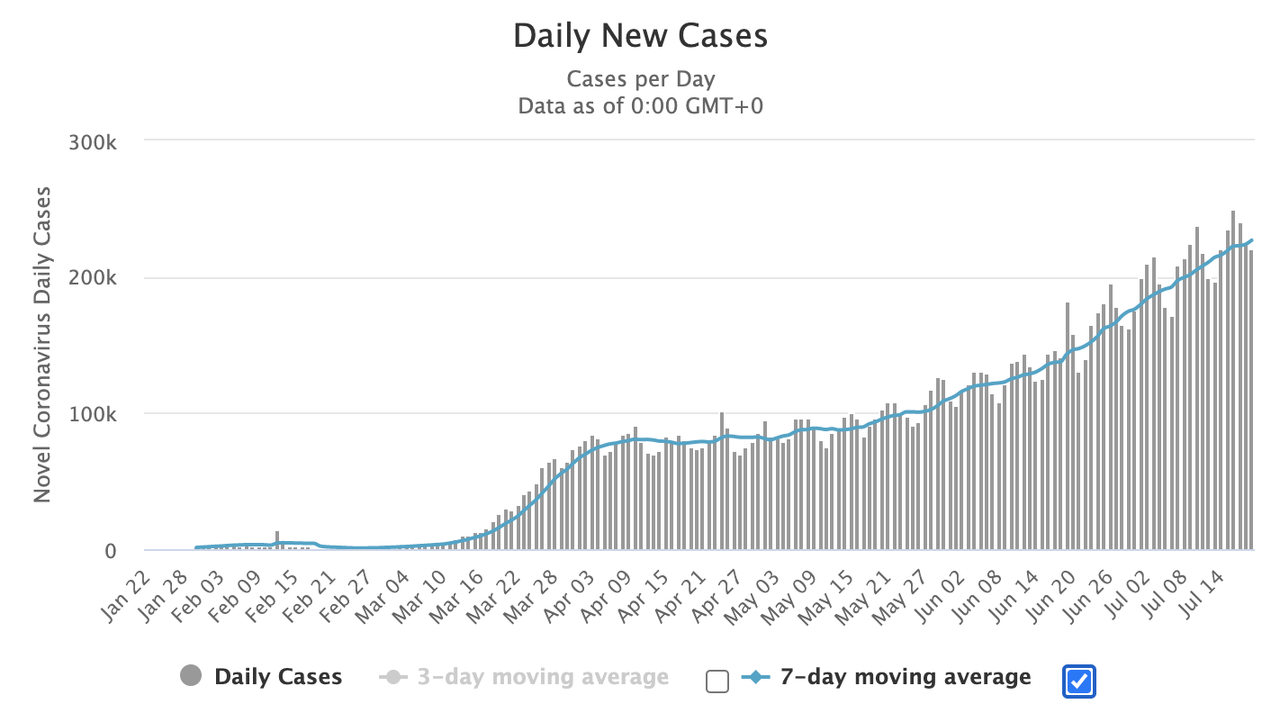 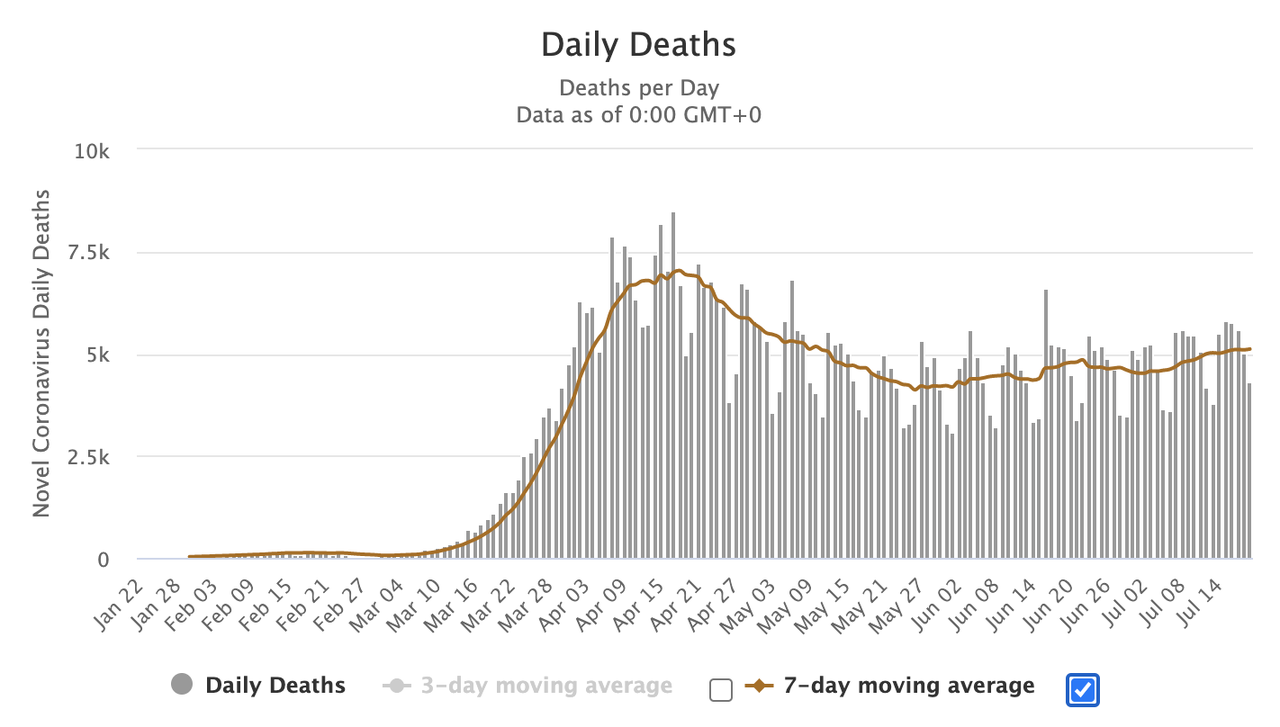 In the US, daily deaths saw a promising pullback yesterday. 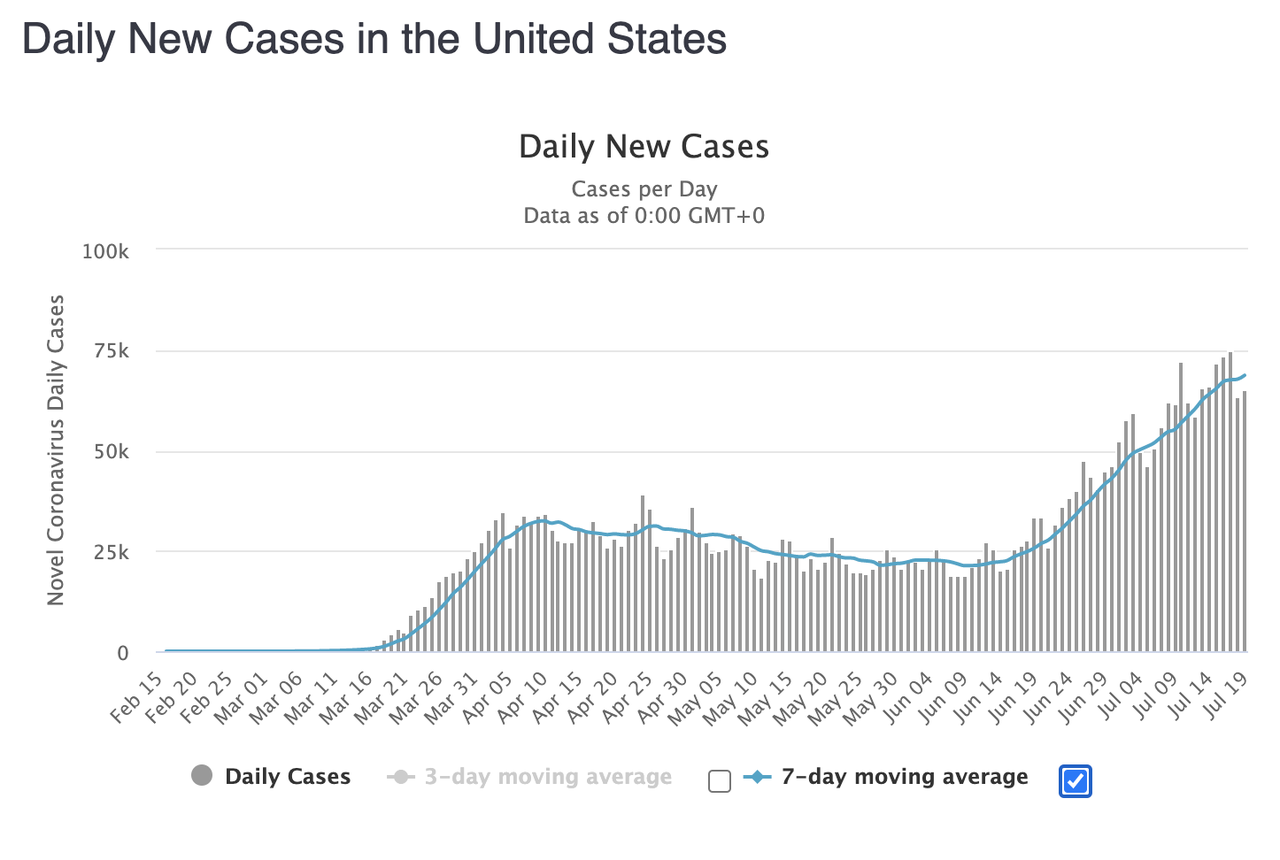 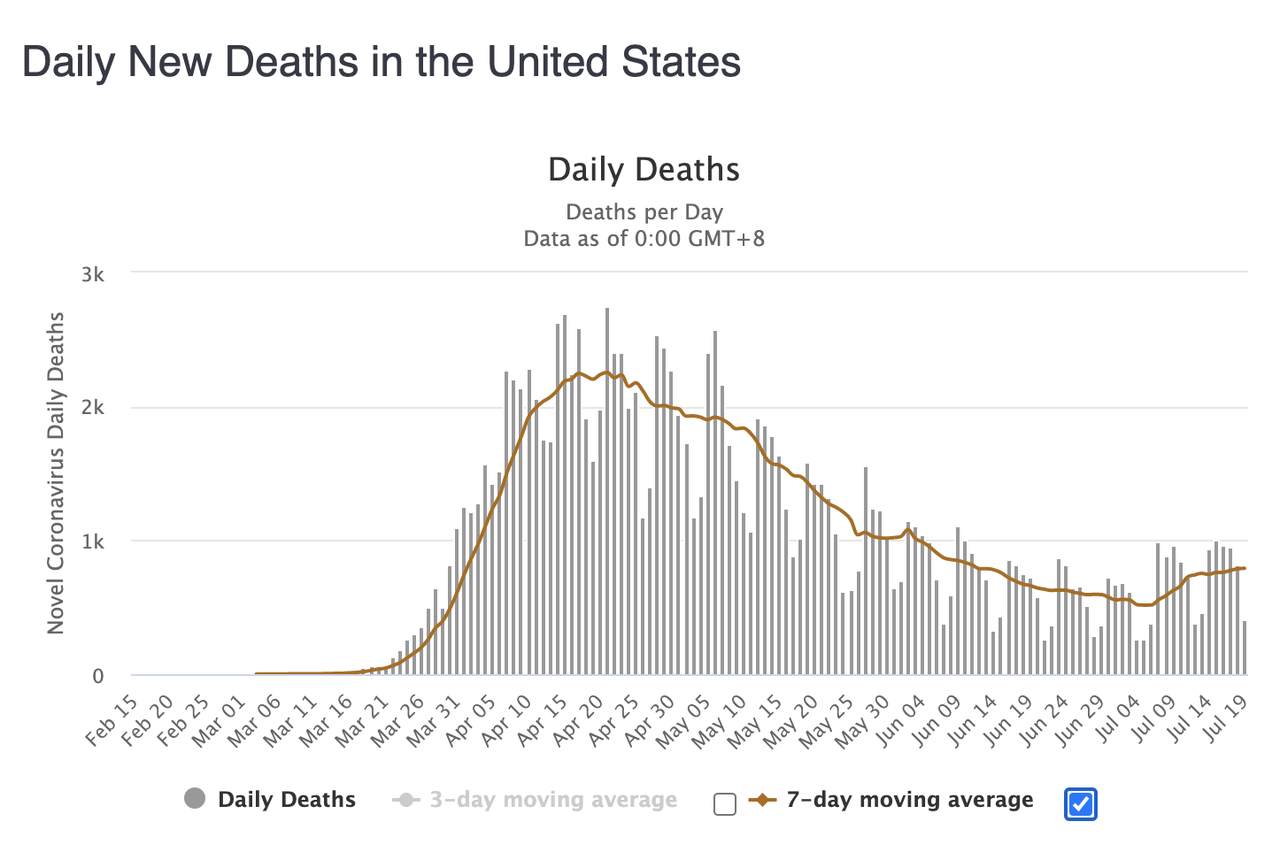 As deaths and hospitalizations creeped higher over the weekend and last week, the number of new cases in the four worst-hit states have climbed. Most notably, Texas reported a promising slowdown just last night, even as LA Mayor Eric Garcetti warns that his city is on the verge of another shutdown.

FUNDSTRAT: “It is too early to be certain, but this 4 week surge in daily cases seems to be flattening, particularly in the 4 hardest hit states, FL, CA, AZ, TX ..” @fundstrat pic.twitter.com/uH5Dh9hKsb

For the first time, India reported more than 40k new cases of COVID-19 on Monday, a new daily record. Exactly 40,425 cases were reported on Monday, which brought the total in the world’s second-most-populous country to more than 1.1 million. The number of confirmed deaths has climbed to 27,497, up 681 since Sunday morning. 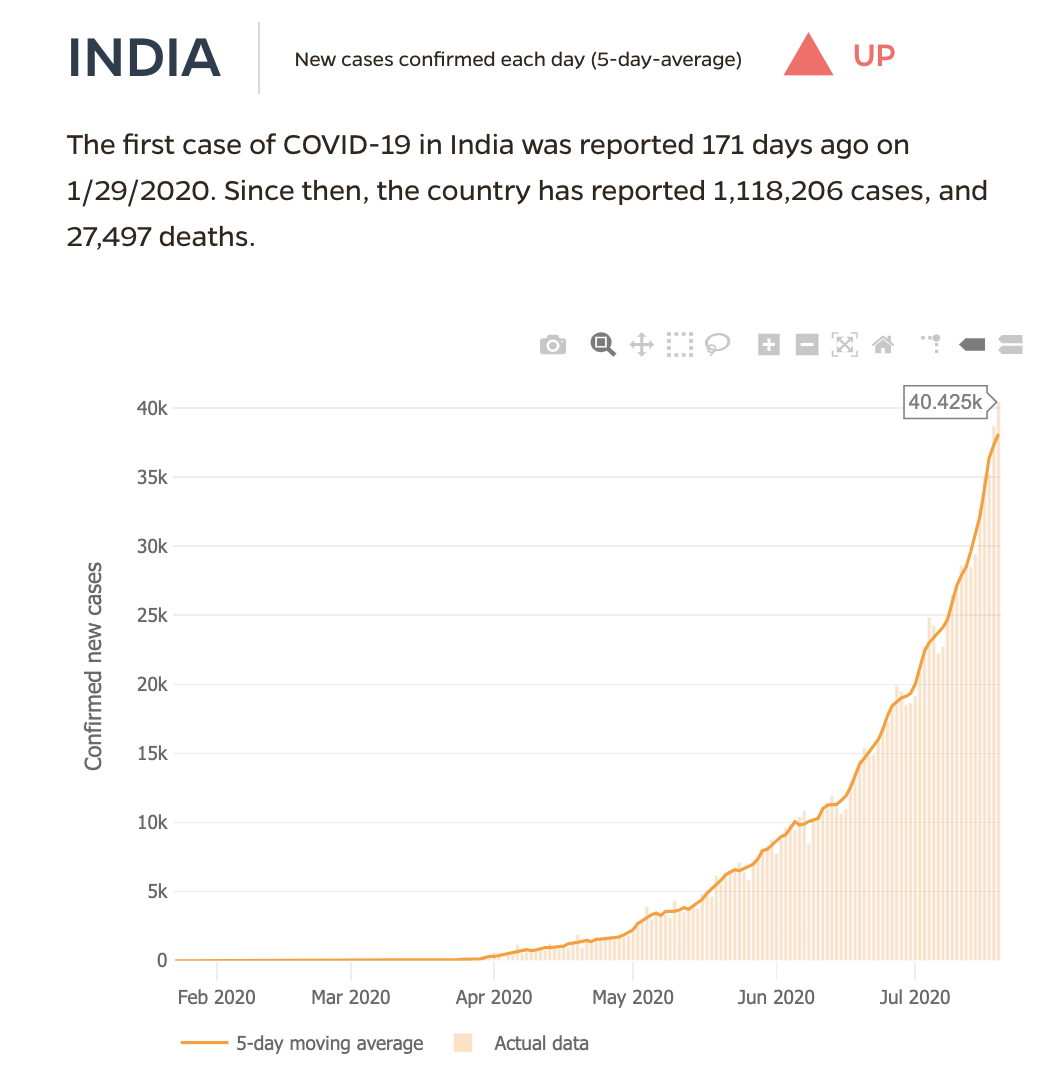 In Japan, Tokyo confirmed 168 new infections, according to Nikkei, down from 188 a day earlier. Tokyo’s metropolitan government raised its COVID-19 alert to the highest level out of four last week, and has urged workers who can to stay home. In South Korea, 26 new cases were confirmed on Monday, down from 34 a day ago. Total infections reached 13,771, with 296 deaths.

After suffering more than 100 new cases in a day – a new record – over the weekend, Hong Kong reported just 73 new coronavirus cases on Monday, including 66 that were locally transmitted, as sweeping new restrictions imposed by Chief Executive Carrie Lam took effect.

The city reported more than 100 cases on Sunday, a record, as Hong Kong Chief Executive Carrie Lam announced that nonessential civil servants must work from home.

Melbourne’s surge in COVID-19 cases over the past month could take “weeks” to subside despite a lockdown and other social distancing measures, according to Australia’s acting chief medical officer. Victoria state, where Melbourne is located, reported a daily record on Friday with 438 new cases. Numbers have cooled slightly since then. People in Melbourne must wear masks when leaving their homes, and could be fined $200 Australian dollars ($140) if they are caught outside without one.

Mainland China reported 16 new cases of the novel coronavirus as of the end of July 18, up from 22 a day earlier. Of these new infections, 13 tested positive in Urumqi, the capital of China’s far western region of Xinjiang region, which assumed a “warlike posture” over the weekend as new cases surged.

As the world awaits the results of the Oxford University-Astrazeneca trial, which is expected to be published by the Lancet, a medical journal known for its early work on SARS-CoV-2, later on Monday. Pfizer reported some early results Monday morning, including the first T-cell response data.

The data “supports and expands” on previously published results, marking the news as largely incremental.

Meanwhile, earlier, Scott Gottlieb focused his daily commentary on CNBC on the lessons we’ve learned about pandemic preparedness, repudiating the narrative pressed by Democrats who have blamed Trump for ‘dismantling’ an Obama-era preparedness office.

“There are a lot of gaps in our preparedness,” @ScottGottliebMD says about the U.S. response to the pandemic. “And this isn’t a sort of a new problem, this has been building over many years.” https://t.co/xbNbmx8xhr pic.twitter.com/LMnJ10u3HP

Refi Boom Crashes To An End On Modest Rate Rise

Trudeau “Open” To Handing Out Taxpayer-Funded Heroin To Vancouver Addicts