The “Government Put” Is A Tailwind For Gold

The “Government Put” Is A Tailwind For Gold

Authored by Addison Wiggin via The Daily Reckoning,

Gold recently crested $1950, where it is today as of this writing. For some, the $1900 price level is an important indicator of momentum building. I’ll share with you some advice on the gold price offered by my zoom interview this week, George Gammon, Rebel Capitalist, below.

In an effort to help you sort things out, I’ve invited George to help us put the macro picture into perspective given the pandemic, shutdown of the economy, a bizarrely resilient stock market and prospects for your investments now and in the future.

Gammon’s own story – from serial entrepreneur to global real estate developer to macroeconomic guru – uniquely positions him to help put the current state of affairs into perspective. On top of that he’s a heckuva good guy, entertaining, approachable; he has a talent for making complex ideas easy to understand.

He’s well versed in my late obsession with collectivism, which I’ve been exploring deeply since the protests started. He also explains how the Fed will monetize the $26.5 trillion in debt racked up during the crisis; the secret vehicle the Treasury will use if Fed efforts fail; how and why the dollar remains strong; what shenanigans the data wonks to white wash important economic data.

We further discussed prospects for reopening of the economy; why the economy and the stock market have diverged so dramatically; what signs to look for in the capitalist endgame; where the heck all that stimulus money is going; and more.

Frankly, my conversation with George was one of the more interesting, informative and entertaining I’ve done since starting the Surviving and Thriving series for Agora Financial Platinum Reserve members.

You’ll definitely want to see the “lightning round” at the end where we cover his thoughts on real estate, stocks, tech, commodities, bitcoin, gold, silver and precious metals; including a look under the hood at some of his own investments. Go here for a full transcript of our interview. 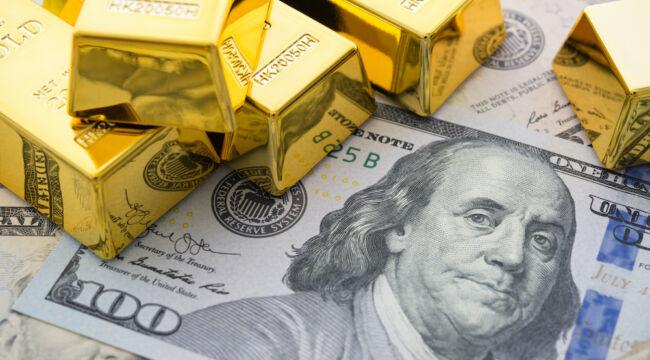 Now, let’s play with a hypothetical…

Let’s say we have another wave of lockdowns in various geographic locales in the economy. Here in Baltimore the mayor is about to close restaurants again, for example. The restaurants close. Bars close. Gyms close. Schools don’t reopen… yada, yada.

Institutional traders get spooked, again – still speaking hypothetically – and start selling stocks. The hoi polloi see the numbers tanking in their 401(k)s. And so on. We know what happened during the initial lockdown. February and March of 2020 account for 8 out of 10 of the largest single day point losses in the Dow Jones’ ever.

“The whole U.S. economy is so tied to asset prices,” George Gammon suggests, “I just cannot see the Fed and or Treasury not stepping in and trying to prop up the market. Fact is, they have to step in and try to do something.”

I can’t argue with that.

“When you trap people in a system of debt,” said lefty linguist Noam Chomsky, “they can’t afford the time to think.”

I’m not sure I’d agree with Chomsky on too many things, but I think he nails that one.

For the first time since WWII the interest on the debt — which grows daily — is higher than the nation’s GDP. If that isn’t a trap, I can’t think of what would be… and so much of the hole the country is digging itself into is entirely out of your hands.

What’s an individual investor to do?

Back in the Crisis of ‘08 I often referred to the “Fed Put” — a friendly colloquial term describing the Fed practice of buying mortgage backed securities to put a floor in the market. So many banks were leveraged into those moribund financial instruments, without the Fed Put, the entire global system would have been kaput.

Fast forward 12 years and a fully re-inflated bubble, The ‘Fed Put’ may have expired. “If you want to think that one through,” George explains:

Remember when the Fed had that emergency meeting in March, where they were going to meet on Wednesday to decide the interest rate policy, but they had that emergency meeting on Sunday where they dropped interest rates by 100 basis points, took it down to zero and they announced QE Infinity and they’re committing a trillion a day to the repo market.

Monday, the market opens, it does go higher for maybe three or four hours, but then it just tanks, drops out of bed. Even though the Fed throws everything at it but the kitchen sink. And then the government comes in and announces all these stimulus programs. Then at that point, the market started to go back up a few days later.

So it seems like maybe, just maybe the Fed Put has expired and has been replaced by a government put. So now the only entity to prop up the market is going to be straight government spending.

What that means is not just bank reserves, but that means a direct M2 money supply — cash to folks like you and me — and an increase in velocity, the speed at which “getting and spending” happens.

Whether it will continue to work, or not, is anybody’s guess.

The “Government Put” could be the butterfly that unleashes a hurricane on the other side of the planet.

“I don’t even worry about the price of gold,” Mr. Gammon answers.

“As far as silver, I look at that more like a speculation, more like Bitcoin. But the ultimate speculation right now are the gold miners. And I was fortunate enough to buy a lot of those back in March as well. And they’ve had a good run, but again, I’m not planning on selling them at all. And if they go back down even further, I’ll buy more.”

“I think if you look at everything we’ve talked about in this interview, and the M2 money supply, the velocity, the deficits, not only that, but you’ve got oil that’s very low, which definitely helps the P&L for the gold miners because a lot of their expenses are energy.”

“Cheap oil benefits them tremendously. And with the Government Put there is already a huge tailwind for gold in general. They could go down. But if they do go down, I’ll happily buy more and just wait until I think they’re expensive, which probably is going to be a long bull run from now.”

Buy gold (and gold miners)… and enjoy the ride.

“60 Minutes” Reports COVID May Have Leaked From Wuhan Lab, Slams “Curated” WHO Report

Free Speech Under Threat from EU Campaign Against ‘Terrorist Content’