Payrolls Preview: Just How “Big” Will Friday’s “Big Number” Be

Payrolls Preview: Just How “Big” Will Friday’s “Big Number” Be

Going into tomorrow’s July nonfarms payroll, the picture is mixed: The rate of jobless claims rose in the survey week, against expectations it would fall; continuing claims also rose in the reference period, even after stripping out the effect of bi-weekly reporting in some states (subsequent claims data however showed a notable decline in new initial claims). The ADP’s private payrolls number missed expectations badly (it has a poor record of forecasting the official data), and there has recently been a number of upward revisions bringing the series in line with the official data. The signals from the ISM reports are mixed, with the manufacturing survey seeing its employment sub-component rise, though remains under 50.0, while the equivalent within the non-manufacturing PMI fell. Challenger job cuts printed the third largest monthly total in history. Still, the indicators appear at odds with some metrics, like rising auto sales in July; some analysts have reasoned that the jobs market is being pressured by renewed infections, but the recovery is still intact for now.

Goldman summarized it best saying that high frequency data suggest that the labor market recovery may have paused or stalled over the last 4-6 weeks. Workplace activity measures have generally declined in the Sun Belt, and they have moved sideways in other states since late June.

Comparing the July to June survey weeks, traditional and Big Data suggest a wide range of plausible outcomes for tomorrow’s report, but as Goldman cautions, on net they are skewed towards a weaker-than-consensus outcome. 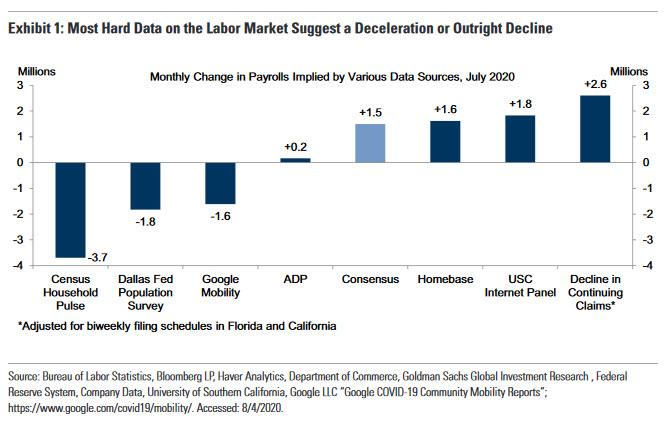 Ironically, this comes even as president Trump hinted on Wednesday to expect a “big number”

So to summarize, the US jobs report will be released at 08:30 EDT and here’s what to expect, courtesy of NewsSquawk:

INITIAL JOBLESS CLAIMS: Weekly initial jobless claims rose to 1.416mln in the July employment survey reference week, against expectations for another 1.3mln print. Pantheon Macroeconomics says tough seasonals were the reason why claims rose after a run of 15 declines; “Unadjusted claims usually drop sharply in mid-July because of the end of the automakers’ annual shutdowns, but most plants didn’t shut down this year; automakers needed to make up for lost production in spring, when Covid-19 forced production to stop,” the consultancy writes, “that meant unadjusted claims didn’t rise in early June, but it also meant they didn’t fall as much as usual this week.” With that said, Pantheon notes that the underlying trend in claims since mid-June, before these distortions, seems to have been about flat. Continuing claims data for the BLS reference week rose to 17.018mln from 16.151mln; it was first rise since early May. Analysts generally see continuing claims as a better gauge of how nonfarm payrolls might come in, but much of the increase in the July reference week was a result of the four states which require bi-weekly filings of claims (California, Florida, Pennsylvania, and Texas – plus Puerto Rico), resulting in ‘sawtoothing’ data, Pantheon writes. “After stripping these states out it is clear that continuing claims elsewhere rose, by about 225K,” Pantheon observes, “That’s the first increase since early May.” Using the weekly jobs data as a proxy, the consultancy says that, after making adjustments, says the data are consistent with an increase in July payrolls; but August is at real risk if continuing claims continue to rise.

ADP: Private sector employment increased by 167k in July, according to data from ADP, significantly missing the consensus 1.5mln; however, the prior June data saw a chunky upward revision to 4.31mln from 2.37mln. The data means that private sector employment is still around 13mln (or about 10%) below the pre-pandemic peak seen in February. ADP said the labour market recovery slowed in the month of July, and that slowdown has impacted businesses across all sizes and sectors. Within the details, the slowdown was a result of the Leisure & Hospitality sector, which Capital Economics says makes sense given the renewed restrictions on bars and restaurants in many states, but other states sectors also saw a sharp slowdown. While ADP’s data is in sync with some high-frequency metrics which portend a slowdown in economic momentum and employment growth, the link between the ADP data and the official BLS employment situation report is tenuous, Capital Economics notes, especially in recent months; the ADP May and June data were both revised up, matching the more optimistic official data. “The apparent weakness of employment growth is also at odds with the strong 11% m/m rise in auto sales last month,” CapEco notes, adding that it is sticking with its forecast for 1mln payrolls to be added to the economy in July; “That would suggest that while the renewed wave of infections is weighing on the economy, the recovery remains intact.”

MANUFACTURING SECTOR: The ISM manufacturing report’s Employment sub-index rose by 2.2 points in July to 44.3, but remains beneath 50.0. ISM noted it was the twelfth consecutive month of employment contraction, though at slower rate compared to June. It said that only one of the six big industry sectors experienced expansion, as factories were able to achieve significant gains in output with a reduced labour pool. “Long-term labour market growth remains uncertain, but strong new-order levels and an expanding backlog signify potential strength for the rest of the third quarter.” Of the 18 manufacturing industries, the five industries to report employment growth in July were: Apparel, Leather & Allied Products; Printing & Related Support Activities; Furniture & Related Products; Plastics & Rubber Products; and Computer & Electronic Products. One manufacturing business in the transport equipment sector said that “overall business remains down almost 70 percent. We are hanging on to as many employees as possible, but we will have to lay off 30 percent or more for at least two to three months until September or October.”

SERVICES SECTOR: The ISM non-manufacturing report’s Employment sub-index fell 1 point in July to 42.1. It was the fifth consecutive month of contraction. Comments from respondents included: “Current freeze on all open positions” and “lower due to retirements and departures; limited new hiring at this time,” ISM said. Five industries reported an increase in employment: Arts, Entertainment & Recreation; Agriculture, Forestry, Fishing & Hunting; Retail Trade; Health Care & Social Assistance; and Utilities. A service company in the public administration sector said “phased opening of businesses continues at a slow pace. Spending is down. Unemployment is up this year, though down compared to last month. Unemployment last year was 2.9 percent. Last month, it was 19.2 percent. This month, it is 16.2 percent.”

JOB CUTS: Job cuts announced by US-based employers jumped in July to 262,649, the third-largest monthly total ever behind April’s 671,129 and May’s 397,016, data from Challenger showed; July’s total is 54% higher than the 170,219 job cuts announced in June, and 576% higher than the July 2019 total of 38,845. Prior to the COVID-19 pandemic, the highest monthly total of job cuts was 186,350 in February 2009, Challenger said. “The lapse in extended unemployment benefits for millions of Americans will significantly impact the economy, as we see more employers announce they are cutting jobs permanently,” Challenger said, “the downturn is far from over, especially as COVID cases rise around the country.” The consultancy added that consumers were buying fewer goods and services, businesses are closing, and bankruptcies are rising.” The majority of cuts continue to come from Entertainment/Leisure companies, including bars, restaurants, hotels, and amusement parks; retailers announced the second-highest number of job cuts this year; and services sector job cuts are significantly up y/y. Challenger said hiring announcements almost equaled the number of jobs cut in July, as companies announced 246,507 hiring plans; Warehousing led. Challenger concluded that many job losses are now permanent, and it will be challenging for many workers to find new jobs and feel safe taking jobs that are public-facing.

So what to expect? As Christophe Barraud writes, looking at high frequency indicators, the signals range from slower improvement to a deterioration. The Census Bureau’s weekly Household Pulse Survey showed that the number of employed Americans declined by about 6.7 million from mid-June through mid-July, including a 4.1 million plunge from the first to the second week of July. In addition, real-time labour estimates produced by academics at Arizona State University and Virginia Commonwealth University showed that the proportion who are employed fell again in July.

Meanwhile, Saint Louis Fed economists, that use real-time data from Homebase to track labour market trend, show “that since the week of June 12, the recovery in employment has slowed down and slightly reverted.” However, as you can see below, by comparing the weeks related to the survey periods, the situation improved a bit from June to July.

The Labor Department data also show that employment conditions started deteriorating in mid-July with initial jobless claims snapping a 15-week streak of declines in the week ending July 18. However, latest figures showed an improvement by month-end. Applications for U.S. unemployment benefits fell by 249,000 to 1.19 million in the week ended Aug. 1 (the lowest since the pandemic started).

Now looking at monthly surveys, results were somehow disappointing. On the one hand, ADP reported Wednesday that private payrolls increased by just 167,000 well below the Bloomberg consensus of 1.2 million and prior figure of 4.314 million in June. In the meantime, the two ISM surveys (Manufacturing and Services) showed that the employment component remained in contraction territory in July, respectively at 44.3 and 42.1 (well below the expansion threshold of 50).

All in all, most of employment indicators imply that the current consensus for NFP is probably too high at +1.5 million (downwardly revised from +2.0 million), yet, the bright spot is likely to come from State and Local Government (Education) jobs amid positive seasonal adjustment. As Goldman notes, there is a seasonal bias in education categories to boost July job growth by roughly 0.5mn to 0.75mn. Some of the janitors and other school staff who normally finish the school year in June and July stopped working this year in April. Reflecting this, education payrolls will likely decline by less than the BLS seasonal factors anticipate, resulting in a sizeable increase in reported job growth inthe sector 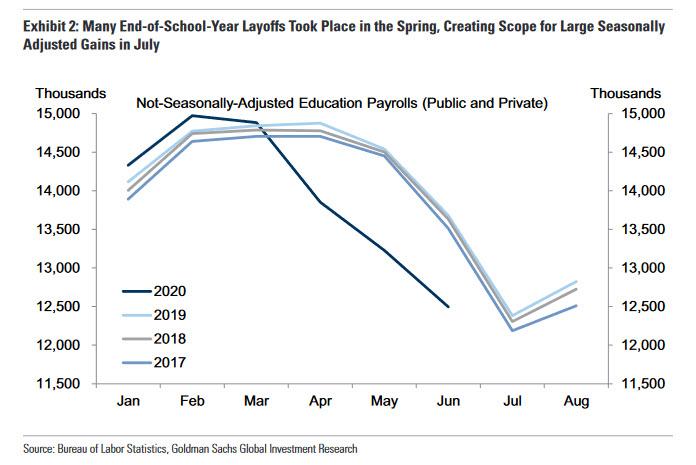 The other contrarian point came from Trump statements. President Trump said Tuesday and reiterated Wednesday that there is “a big number coming out Friday on jobs”. While presidents usually receive a preview of the employment report before its official release, it tends to be the prior evening.

To summarize, high frequency and monthly indicators suggest that employment growth was weaker in July with some deterioration seen around mid-July. Due to the survey period, this phenomenom is unlikely to be fully reflected in the report. In addition, seasonal adjustment issues related to Education will boost artificially the headline by several hundred thousand jobs in July. Trump positive comments also imply that the worst scenario (negative print) is very unlikely.