A world reserve currency is supposed to be superior in storing value, but through boundless money-printing the U.S. dollar hasn’t been able to compete with gold by a long shot… 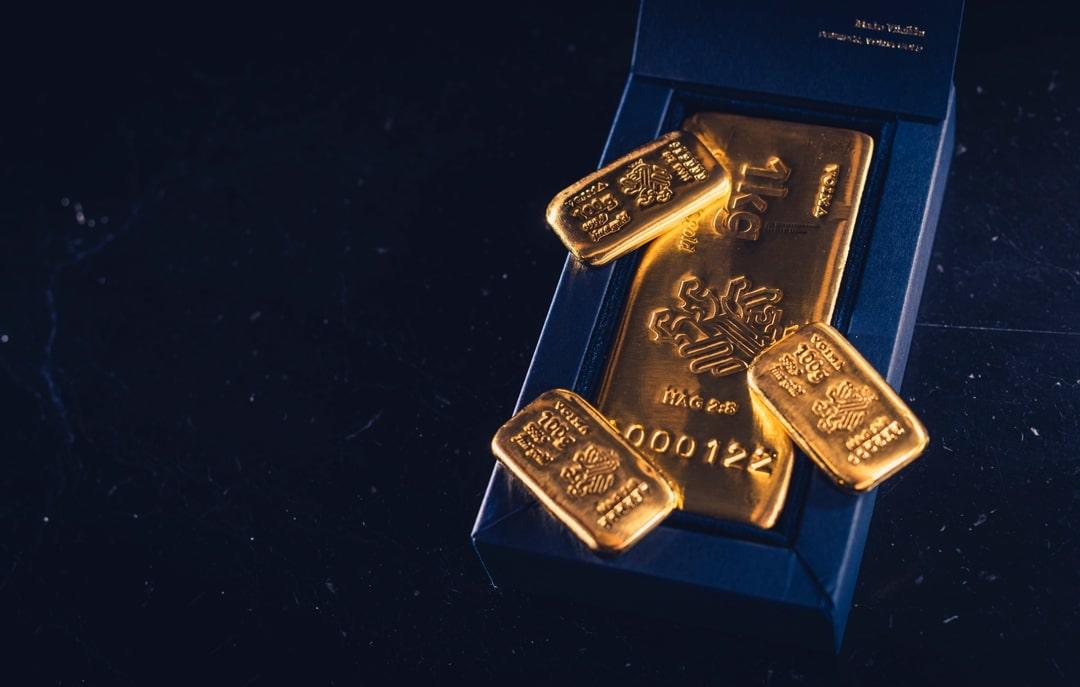 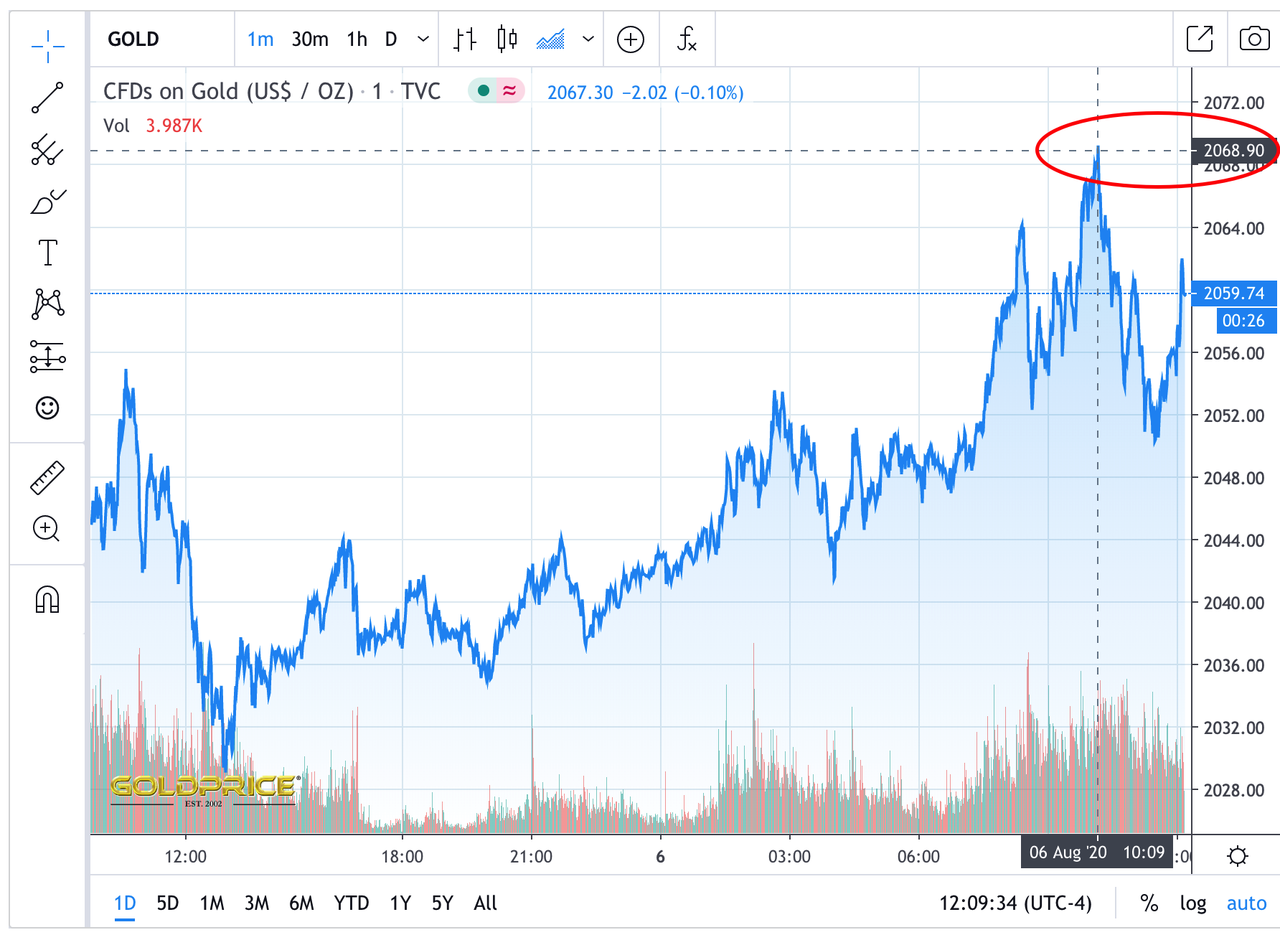 That’s a 99% decline in value of the dollar against gold. Other reserve currencies such as the British pound and Japanese yen have done even worse. The yen has lost 99.98% of its value against gold in 100 years. Note, the chart below has a log scale. 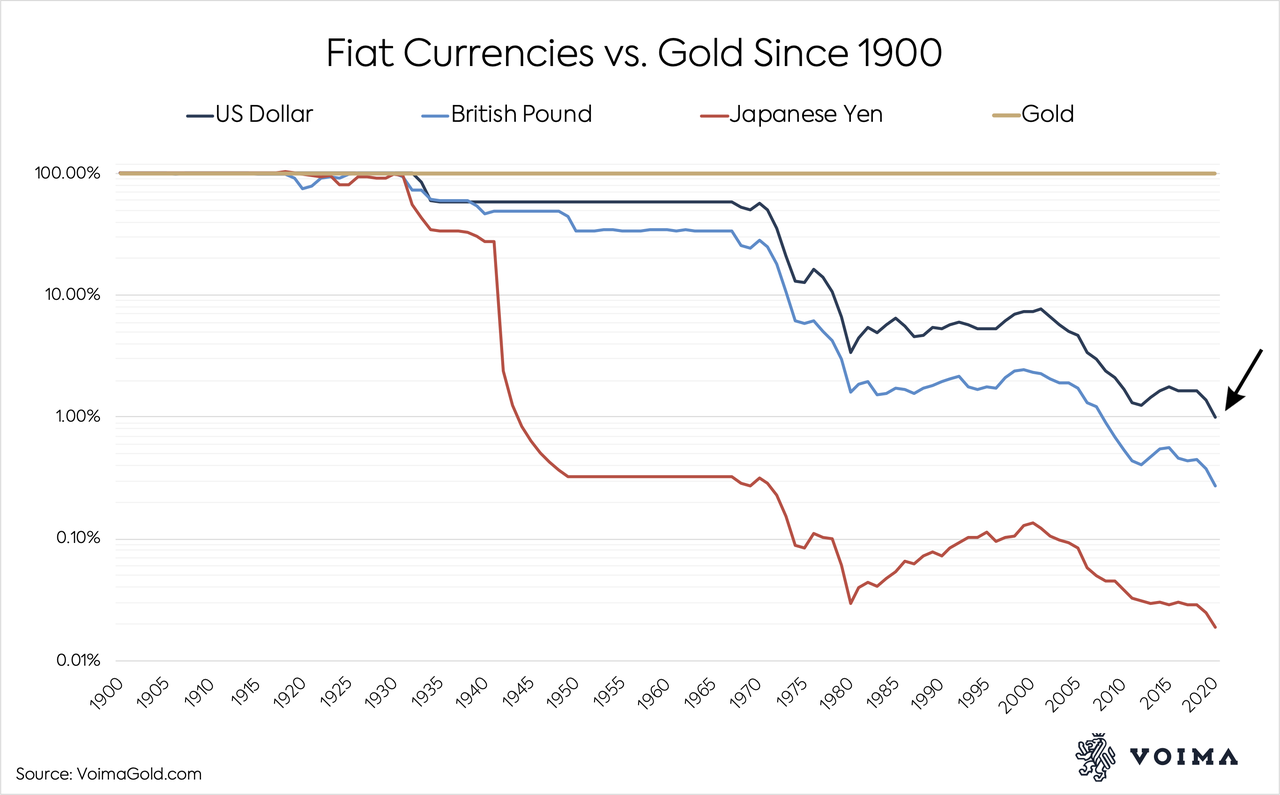 Gold doesn’t yield, if you don’t lend it, but it’s the only globally accepted financial asset without counterparty risk. Because of its immutable properties gold sustained its role as the sun in our monetary cosmos after the gold standard was abandoned in 1971. Central banks around the world kept holding on to their gold, despite its price reaching all-time highs such as now. This is due to Gresham’s law, which states “bad money drives out good.” If the price of gold rises central banks are more inclined to hoard gold (good money) and spend currency that declines in value (bad money).

In the chart below you can see that gold’s purchasing power is remarkably stable. As the gold price rises through time it mainly compensates for fiat currencies being devalued versus goods and services. In other words, the price of gold goes up by the same amount that consumer prices rise. Gold even shows a tendency of increasing in purchasing power, which might reveal inflation numbers published by governments are too low. Another theory is that sound money, like gold, should rise in purchasing power as technological development makes goods increasingly cheaper to produce. 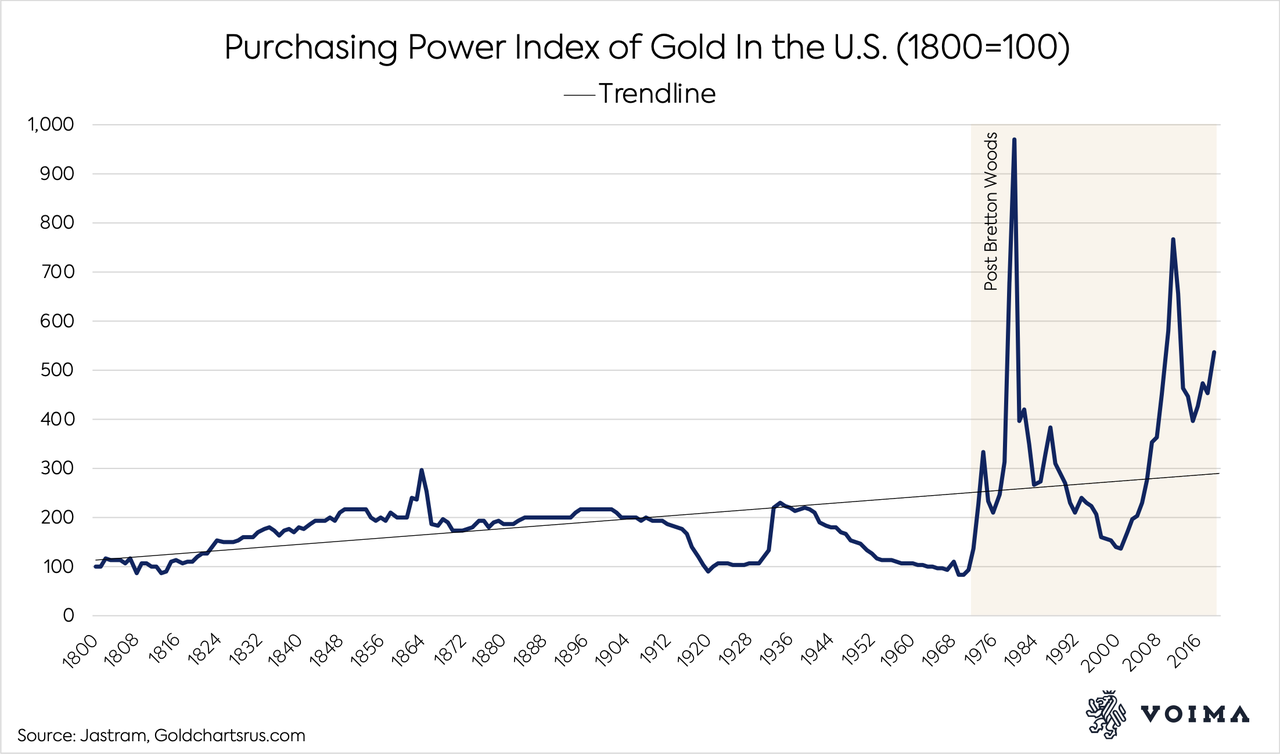 You might think that dollars with interest, for example U.S. government bonds (Treasuries), would have outperformed gold since the gold standard was abandoned in 1971. But this isn’t true. Gold has performed better than Treasuries. 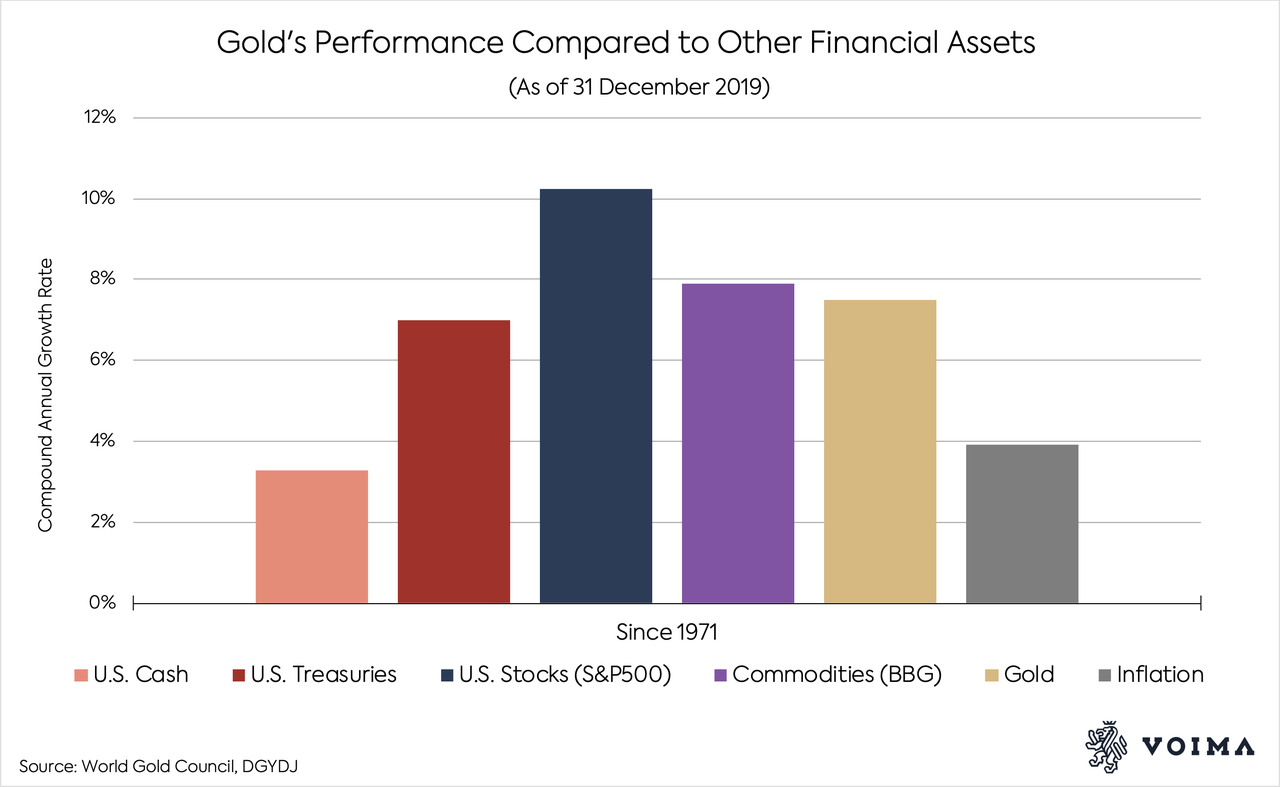 In my view, the gold price will continue to rise and will be incorporated in a new international monetary system. The current all-time high in dollar or euro terms is just a nominal measure. When taking into account inflation gold is not at an all-time high, more importantly I’m expecting central banks to debase their currencies way more in the years ahead because the world has never been this much in debt. The debt levels around the world are completely unsustainable and can only be lowered through debt relief or inflation. The Federal Reserve and other central banks are communicating they choose inflation. A few months ago the President of the European Central Bank, Lagarde, said: “We should be happier to have a job than to have our savings protected.” That is a clear admission that (in this case) euro savings will be wiped out.

The Fed is expected to make a major commitment to ramping up inflation soon https://t.co/kFjh8yCw01

Lowering the debt burden through inflation is “the most expedient, least well-understood, and most common big way of restructuring debts.” It has been done many times before in history (see chart below), and will be done again. 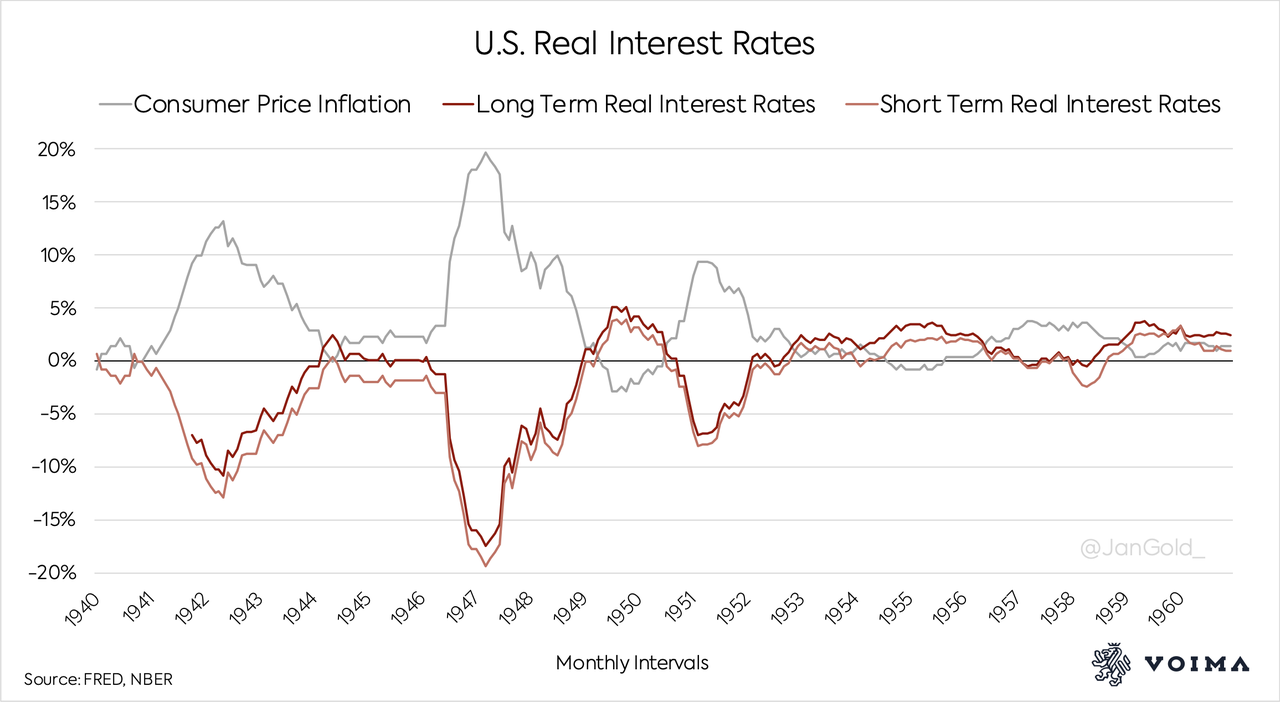 Schumer: Americans’ Jaws Would Drop If They Knew What Happened In White House Meeting

All Alone on Valentine’s Day: 12 Econ Facts to Fill the Void